5 Things to Do at Famous Graves in Père Lachaise Cemetery 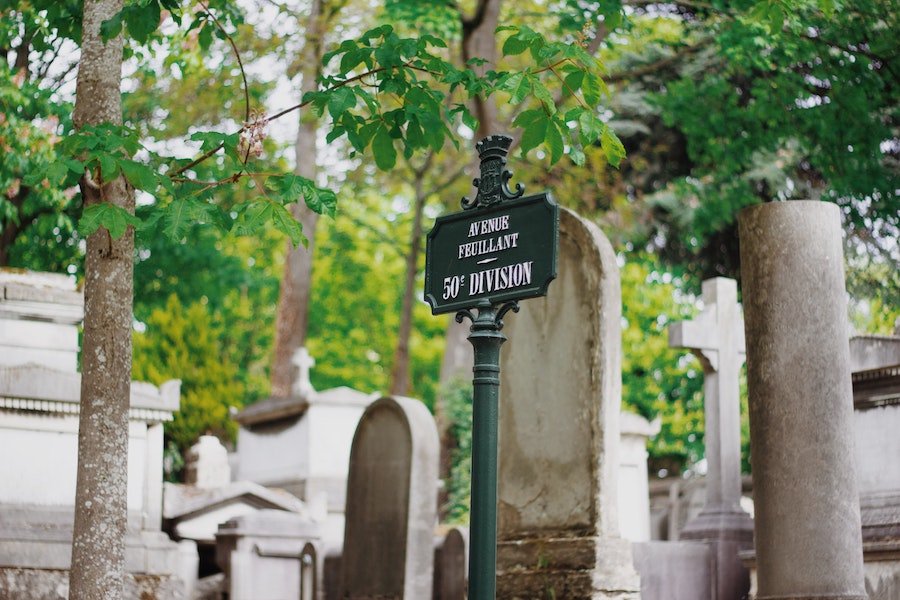 Normally, when you imagine a cemetery, you might not think of a picturesque scene. That’s not the case when tourists come from around the world to visit the most famous cemetery in Paris, Père Lachaise. Here, they are greeted with the welcoming whimsical charm of a pleasant park, also home to the hauntingly memorable stories of famous entertainers and icons.

It’s a place with character. One of my favorite stories I’ve heard about this cemetery is that people in the ’80s and ’90s were so passionate about the stars buried here that they left lipstick marks on celebrities’ gravestones and played ballads on their guitars until security shooed them away.

Why You Should Visit 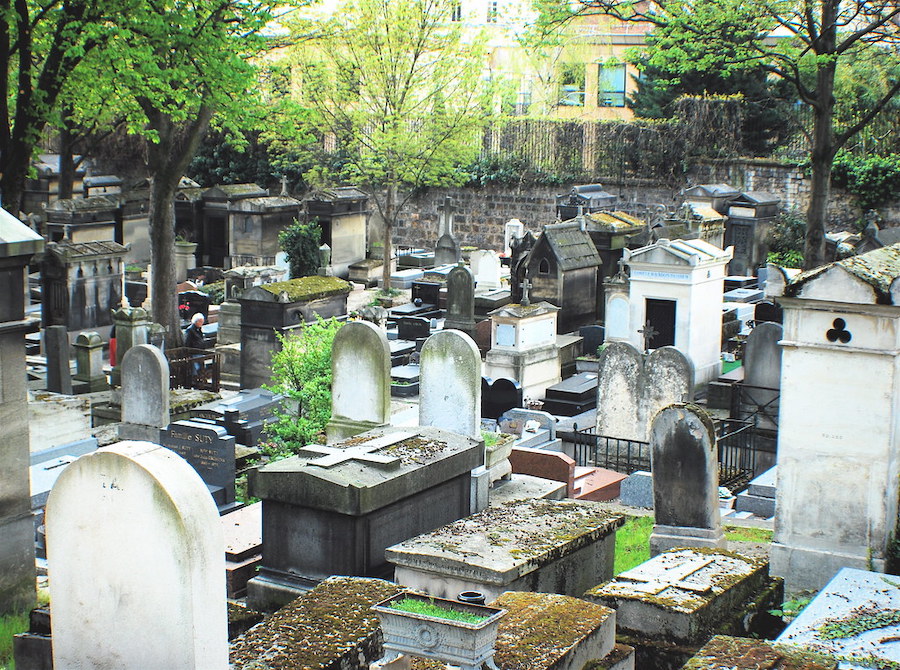 The French charm of this historic site and the legacy of the artists and political figures, among others memorialized here, delight visitors from all walks of life. When I first entered, surrounded by so much history and memories of the once living, it was like being teleported to another world.

In the 20th Arrondissement, Père Lachaise Cemetery is one of the largest, most celebrated cemeteries in the world. It was one of the four main burial grounds that was commissioned by the city of Paris during the peak of great Haussmannian architecture influence and lies to the east of the city.

There’s so much awaiting your discovery within the iron gates of Père Lachaise. Some of the world’s most beloved singers, philosophers, writers, musicians, and artists are laid to rest in this 110-acre tree-lined cemetery. These include Frédéric Chopin, Gertrude Stein, Molière, and Marcel Proust.

Not surprisingly, Père Lachaise Cemetery ranks as one of the top tourist sites in Paris. Here is a run-down of the five most fascinating graves to see when you visit the cemetery and what you should do at each one. I’ll also share tips and important details to help you plan your trip.

1. Join the tradition by kissing the grave of Oscar Wilde. 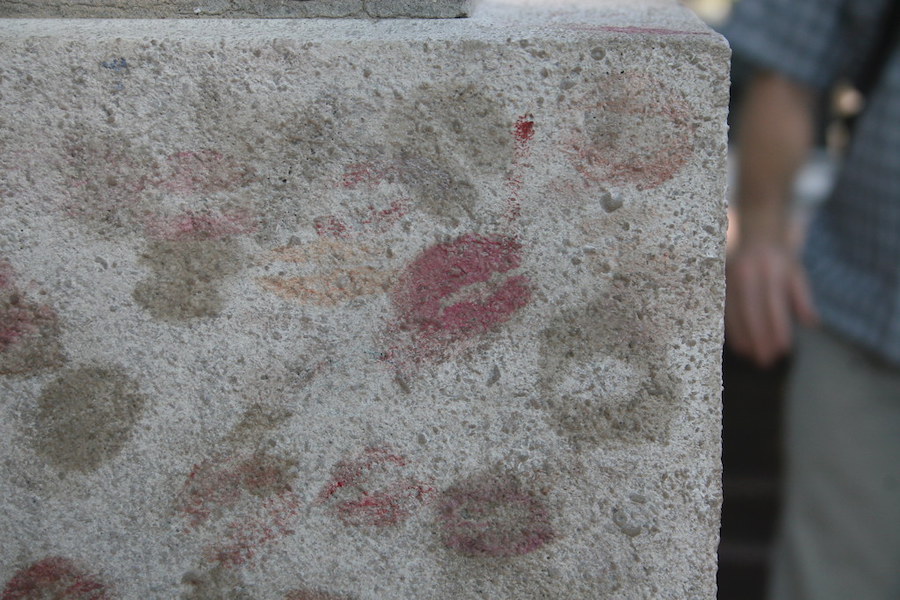 Oscar Wilde, the famous Irish poet, author, and playwright, is so beloved that his admirers have traveled the world to leave lipstick-lined kisses on his grave over the years. In 2011, Wilde’s entire tomb was so unrecognizable that it had to be deep cleaned. A layer of protective glass was even installed as a barrier to discourage future visitors from incurring further damage, but you can still blow a kiss (and snap a selfie to commemorate the moment).

The design and commission for Wilde’s tomb was completed by the sculptor, Jacob Epstein. The sculpture is a messenger in flight with large wings, inspired by Wilde’s poem, “The Sphinx.”.
On the back of the grave, you will see there is an inscribed epitaph from one of his famous poems, “The Ballad of Reading Gaol:”

And alien tears will fill for him
Pity’s long-broken urn,
For his mourners will be outcast men,
And outcasts always mourn.

When I visited, I couldn’t believe I had finally got to see the tomb of one of my favorite literary legends, in person. The protective glass barrier didn’t stop certain visitors from climbing above to leave their lip prints on the grave (and we don’t recommend you do this), but it was still an absolute must-see.

2. Try to listen for the echo of the beautiful voice of legendary singer Edith Piaf.

Edith Piaf, known as “the little sparrow,” is one of the most iconic singers in France’s history. Piaf was discovered singing on the streets of Paris and plucked from her traumatic and tumultuous childhood, which included brushes with homelessness and experiences of being raised in a brothel. There is even a museum dedicated to Edith Piaf, which you can visit in Belleville.

I remember when I visited her grave, I was confused that her full name wasn’t evident or glamorously displayed. Apparently, I wasn’t the only one who was confused — I ran into other travelers searching for her memorial, too. After the small hunt, we found the celebrated cabaret singer’s final resting place, which was in her family plot. If you’re looking, just make sure to keep your eyes peeled for a grave that reads, “Famille Gassion-Piaf.”

The neighborhood around Père Lachaise, Belleville, has many cafés and restaurants with menus and references dedicated to Edith Piaf’s memory. It’s a great place to visit after your experience at Père Lachaise.

3. Snap a photo of the graffiti at the grave of the wild Jim Morrison. 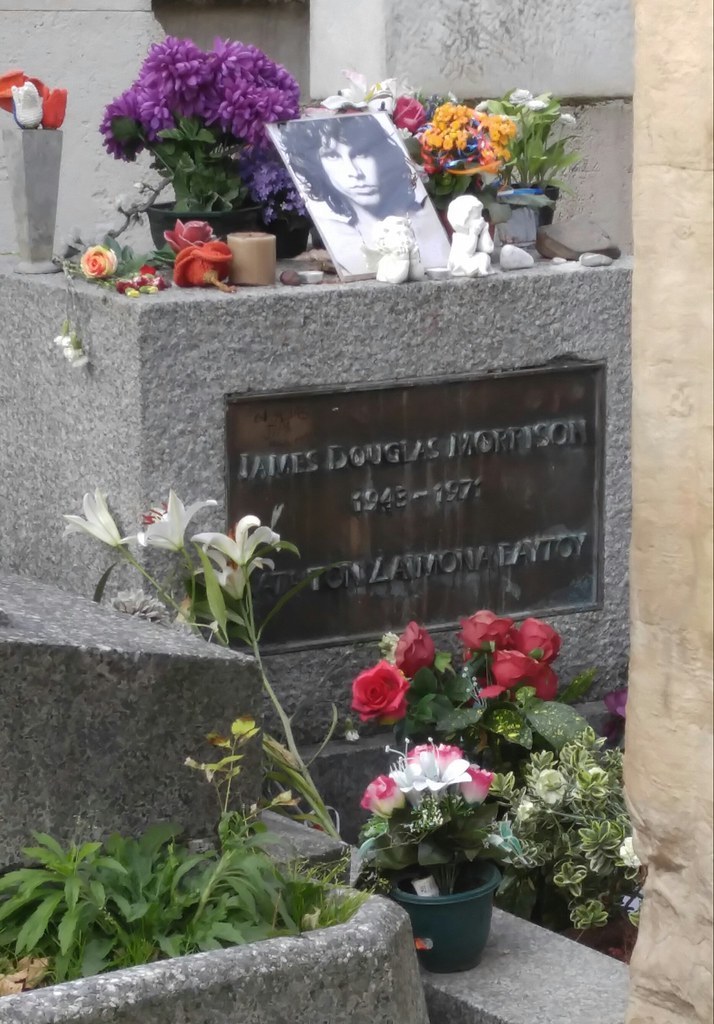 If you’ve heard of the 1960s band, “The Doors,” you are probably familiar with the lead singer, Jim Morrison, reputedly a trouble-maker. The American singer is infamously known to have died in a bathtub in Paris and is now buried here, at Père Lachaise.

Much like the adoring fans of Oscar Wilde, fans of the Californian band have made his small grave a pilgrimage site, marking it with graffiti and lipstick marks over the years. Today, the grave is cordoned off with security, which left some visitors no choice (they felt) but to cover a nearby tree in chewed gum.

Morrison’s headstone attracts an almost cult following of visitors, who occasionally play music in his honor and sometimes even leave “love locks,” or padlocks, on the surrounding steel gates.

4. Giggle self-consciously in the presence of the “fertility grave” of Victor Noir. 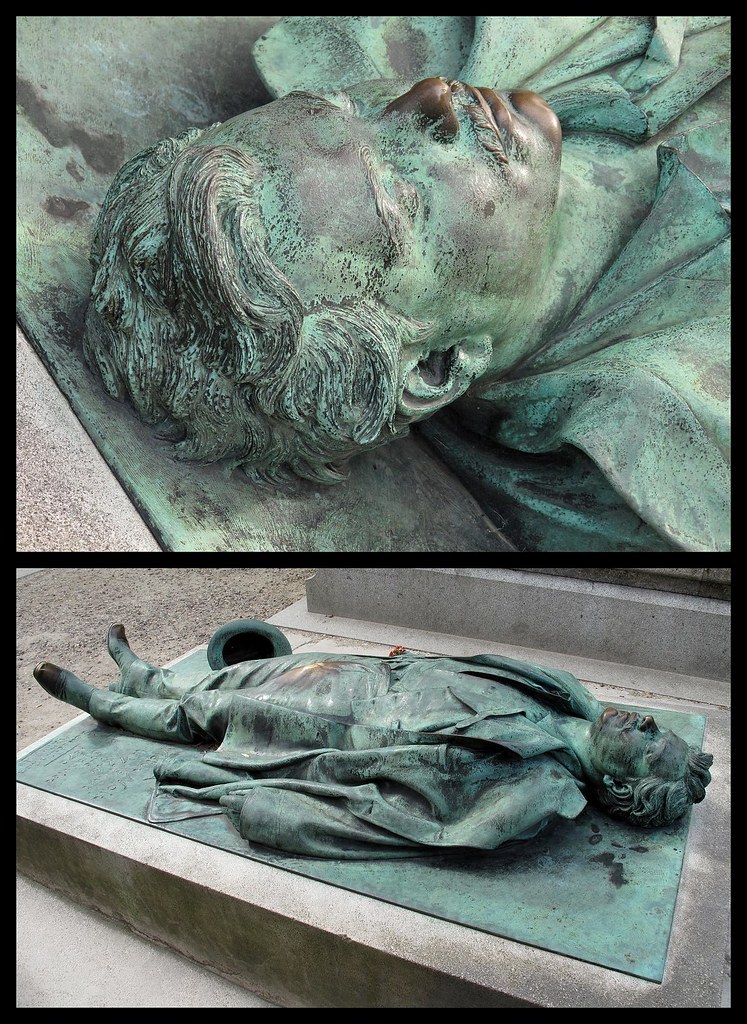 You might not know Victor Noir as the famous French journalist that he once was, but his grave is striking. Legend has it that those compelled to touch his reclining statue will improve their fertility. Less superstitious visitors will most likely find the tradition funny — but will you touch the statue? If you do, you will know exactly where to touch the statue for a possible fertility boost, as the spot is very much worn down.

Victor Noir was shot in a duel with a prince (Pierre Bonaparte, a cousin of Napoleon III). Now, his infamous death is immortalized in the form of a life-size bronze statue showing a depiction of him, lying on a street having dropped his hat in his fall.

I thought the grave was so unique compared to the others in Père Lachaise. I highly recommend checking it out — even if you don’t have any interest in increasing your fertility.

5. Reflect on the importance of free speech at the grave of Bernard Verlhac.

Bernard Verlhac, known as Tignous, was a longtime cartoonist at satirical magazine “Charlie Hebdo.” In 2015, he was tragically killed in a terrorist attack.

Famous for covering highly controversial subjects, his work still remains symbolic of free speech. His grave can be found on the right side of the main alley, when entering Père Lachaise from the front entrance by Gambetta metro station. This memorial features a portrait of Verlhac and is a poignant experience for many who visit and remember the relatively recent events that caused his death.

I was overwhelmed with emotion when I visited Verlhac’s grave, as it was one of the newer memorials among those who have been buried here. From looking at his grave, covered in fresh flowers, I knew the memory and impact of his work has not faded one bit, especially for the French.

Answers to your FAQs for visiting Père Lachaise Cemetery 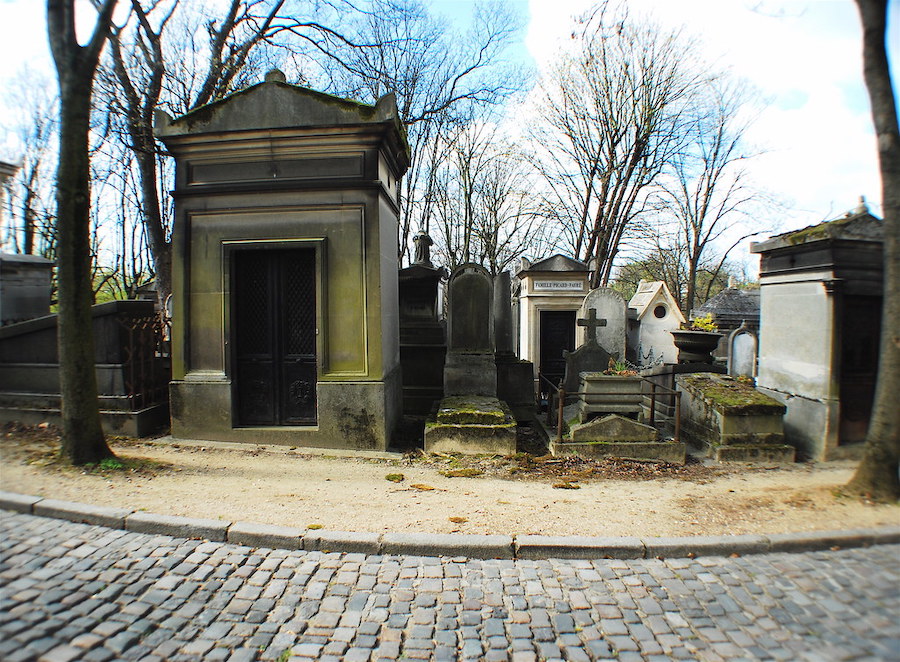 Why is this cemetery named Père Lachaise?

The name of this cemetery originates from the priest confessor to King Louis XIV, Père François de la Chaise. The priest once resided in a Jesuit house that used to be located on the grounds.

Who can be buried at Père Lachaise?

Père Lachaise cemetery is extremely popular, meaning there is a waitlist and the rules are strict in order to be buried here.

How much does it cost to visit and when can I go?

It is absolutely free to visit Père Lachaise Cemetery and opening hours are 8 a.m. to 6 p.m. late March to October. However, the hours change November through mid-March to close a half hour earlier.

Which famous people can you find at Père Lachaise?

Estimates of how many people are buried in the cemetery range from 300,000 to 1 million. Among the most famous are Molière, Eugène Delacroix, Georges Seurat, Oscar Wilde, and Isadora Duncan.

Do you have any extra tips before visiting?

Absolutely, to begin, it’s better to descend at the Gambetta metro station, so it’s mostly a downhill walk instead of the journey uphill if you decide to stop at the Père Lachaise station. Also, most importantly, make sure to take a snapshot of the map of the large cemetery at either entrance upon entree. This way, you can navigate through the complex maze of graves to find all the celebrity memorials that your heart desires.

Père Lachaise Cemetery is a hard place to forget during your tour of Paris, with its incredible memorials, from tragic events or famous figures, people you’ve seen in films, heard on the radio, or read about in history.

Not only is this cemetery eye-opening to visit for history alone, but it’s a perfect place to bring your family for a leisurely walk. Although it’s a cemetery, Père Lachaise is as beautiful and green as other Parisian parks with plenty for nature-lovers to explore.

The first time I strolled through the Marais, it was clear that this was the district that embodied a new-bohemian — and slightly rebellious — spirit of Paris.…

The Latin Quarter of Paris is a nice mix of contradictions: young and lively, but also historic and somber. You can enjoy vibrant Parisian nightlife, and you can…

How To Visit Notre Dame Today [Updated for 2022]

Paris’ Cathedral of Notre Dame is a masterpiece of Gothic architecture and one of the most visited monuments in FFor many romantics, Paris is a mythical city where…