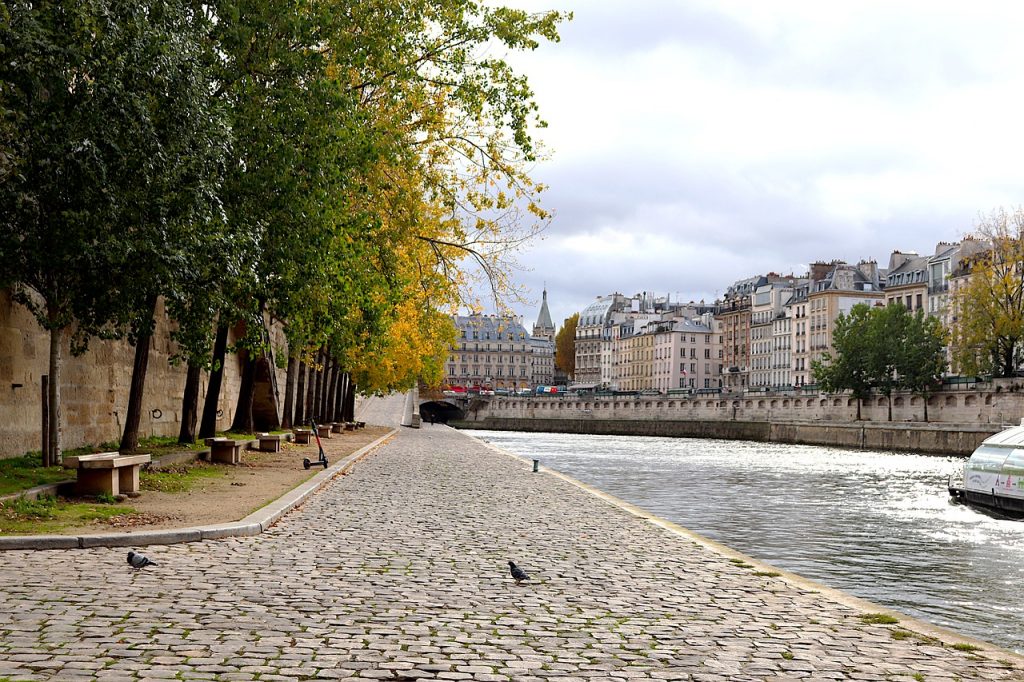 The Latin Quarter of Paris is a nice mix of contradictions: young and lively, but also historic and somber. You can enjoy vibrant Parisian nightlife, and you can also visit the crypt where preeminent figures in French history are buried.

It’s the 5th arrondissement of Paris — almost in the center of the city — on the Left Bank of the Seine. It’s perhaps what makes the area so attractive to locals, students, and tourists alike. It’s probably the neighborhood I spend the most time in, so I’m biased. I’m a regular at a few coffee shops and bars here.

Like most neighborhoods of Paris, the entire area is an open history book. Here why you shouldn’t skip the Latin Quarter on your visit to Paris.

You’ll be amazed at the grandeur of the Panthéon.

This massive neoclassical crypt actually started out as a temple. In 1757, French architect Jacques-Germain Soufflot initially designed the structure as the Church of Sainte-Geneviève. During the French Revolution, however, the Panthéon became a place consecrated to great French men and women. Marie Curie, Voltaire, Rousseau, and Alexandre Dumas are among the notable names who rest at the Panthéon.

Outside the monument, its high dome, Corinthian columns, and triangular pediment still impose the prestige and grace of Roman architecture today. Inside, you’ll find mosaics and paintings that depict French history.

The best way to get there is via the RER Luxembourg station. You’ll find ticket information on their website.

The Great Mosque of Paris is tranquil and inviting.

Another must-see is the Grande Mosquée de Paris, which you’ll find a short walk from the Place Monge metro station on Line 7. The elegant house of worship, constructed in the 1920s, welcomes visitors to admire its Moorish architecture and 108-foot minaret.

The tiled courtyard and fountain are beautiful, but I made the mistake of going to the mosque during the winter, when the fountain is dry. I recommend going in summer to see the mosque in all its splendor. I’d also suggest you check out the restaurant at the mosque, though I have yet to give it a try. When I went I accidentally mistook the restaurant entrance as the mosque entrance, and the enticing smells almost tempted me to stay. Entry for most adults is €3, but you’ll find more ticket information on their site.

The Jardin des Plantes, or “Garden of the Plants,” is a local botanical garden that serves as the main patch of green in the Latin Quarter. The garden spans more than 6 acres and has been part of the city landscape for 400 years.

The Jardin des Plantes also includes a zoo with paid entry, but if you’re lucky you can still spot the animals outside the zoo section in the free public area.

All in all, it’s a good spot to jog or set up a blanket. But I personally like to walk around and see if I can spot some of the cute red pandas.

A short walk from the Jardin des Plantes is the Arènes de Lutèce. The ancient arena is a remnant of the Gallo-Roman period, dating back to the first century. In those days, they could hold some 15,000 spectators. Today, you’re much more likely to see locals playing a game of pétanque.

If you’re ready for more gardens, head to the Luxembourg Gardens. While technically just outside the Latin Quarter, it’s a great place for a picnic, a truly Parisian pleasure.

I’ve already had a few picnics here, admiring the gardens’ perfect pairing of plants and sculptures while savoring a baguette and cheese. Another highlight for me is the rose garden. Make sure to plan your visit in spring when they’re in bloom.

Like before, just hop off at the RER Luxembourg station to get there.

You can step back in time at the Cluny Museum.

The Cluny Museum – National Museum of the Middle Ages boasts an impressive collection than any art-lover should see. The museum’s works span from the 6th century BC to the 16th century and even include a medieval garden. Some of their prized displays include the golden rose and a tapestry series known as The Lady and the Unicorn.

There are several ways to get to this museum (in French, you’ll be looking for the Musée de Cluny – Musée National du Moyen Âge). The RER line B at Cluny – La Sorbonne or RER C at Saint Michel are good stops to get off at. You can also take metro line 10 to Cluny La Sorbonne, metro lines 4 or 10 to Odéon, and metro line 4 to Saint-Michel.

This is the neighborhood to let loose and experience Paris nightlife.

The Latin Quarter isn’t a bad place to start if you want a night out in the City of Lights. The lights in this neighborhood are bright neon once the sun sets. Just go down Rue Mouffetard or Rue de la Huchette, and you should find a variety of clubs and bars to choose from. I’m more of a bar person myself, and I’ve gone to several in the area.

If you’re looking for an international scene, check out The Wall on Rue Lacépède. The cocktails and general atmosphere of the place will remind you of your average college bar in the U.S. I say that because when I went there I tried their neon blue AMF cocktail, a staple in any university joint.

If you want to mingle with the locals, try the very affordable beers at 2 Bis Café on Rue des Écoles. At €3 a pint, it’s no wonder people flock to this location. The only problem you’ll run into is finding a seat during happy hour. I’ve already gone twice with friends only to find the place completely full.

For the Goldilocks choice — a local and international crowd — I suggest Le Piano Vache, a mellow bar not far from the Panthéon with good drinks and a cool, eclectic rock ’n’ roll décor. You can’t go wrong with a pint of their house beer. My friends and I are regulars here and like to check out the local music act on Thursday nights. A band has even played a few songs we requested.

Finally, I thought I’d throw in a late-night eats suggestion: Au P’tit Grec. It’s not a classic Parisian brasserie, but it is a popular creperie among locals for quick (although maybe not the healthiest) food after a late night out. They serve both sweet and savory crepes. I used to never like savory crepes until I tried their “Savoyarde” crepe, complete with cheese, ham, potatoes, lettuce, onions and tomatoes.

Answers to Your Questions About the Latin Quarter

So now you’re excited about visiting the Latin Quarter — you should be! It’s a great place to experience a different side of Paris. Here are a few answers to questions tourists sometimes ask about this exciting corner of the city.

Is the Latin Quarter in Paris safe?

Yes, the Latin Quarter is safe to explore. The district is filled with students, locals, and tourists at all hours. Still, since Paris is a big city, keep an eye on your cell phone and wallet or purse.

Why is it called the Latin Quarter?

First, you should know the neighborhood itself is older than most countries, dating back to the Middle Ages. The Latin Quarter has been a hub of learning for centuries. It was a university district where teachers and students spoke Latin until 1789, hence the name Latin Quarter or, in French, “Quartier Latin.”

It remains a student neighborhood today as home to the Sorbonne, France’s oldest university. Over the years, the neighborhood has housed different intellectual and philosophical movements from theological studies at the Sorbonne to the Existentialism wave in the 1940s and ’50s.

When I think of the Latin Quarter, I see cobblestone streets, hilly winding allies, and pedestrian roads that light up at night. I hear the mellow sound of jazz clubs, like the famous Caveau de la Huchette, amidst the louder pop clubs. I hear the country band at one of my favorite bars. I smell the tempting aromas from late-night crepes. I feel the breeze on the terrace of packed bars filled with young people.

The Latin Quarter: A Neighborhood You Can’t Miss

My list could go on. I could tell you about the anglophone bookstore Shakespeare and Company, a favorite spot for literature lovers. I could mention Columbus Café & Co., one of my go-to spots to drink coffee while working on my laptop. And how could I forget the sweet and fluffy cream puffs from the Parisian pastry shop Odette? If you walk up the stairs of the shop and get the table by the window, you’ll get a beautiful view of Notre Dame.

You should explore all this neighborhood has to offer during your Paris visit. It will come as no surprise that the Latin Quarter is one of my favorite parts of the city — and it’s likely to work its charm on you, too.