A Complete Guide for Visiting the Sagrada Família in Barcelona – Blog
Welcome! 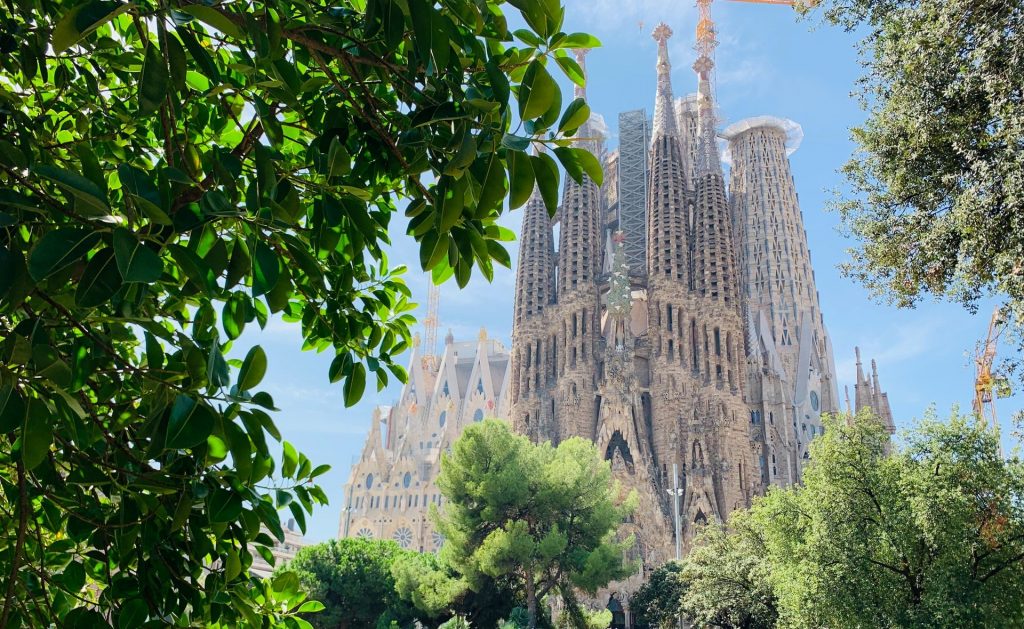 One of the most visited places in Barcelona is the ornate Roman Catholic basilica la Sagrada Família aka the Basilica of the Holy Family. And rightfully so. This still unfinished but incredible church was designed by the famous Catalan architect Antoni Gaudí and is both a representation of his imagination and a reflection of his thoughts on faith and religion.

In this post, I’ll share some insights into the architecture of this building, some interesting facts about the basilica, and helpful pointers on how to prepare for your visit to the beautiful Sagrada Família.

A work in progress

It might surprise you to find cranes and scaffolding surrounding the church. Although construction on Gaudí’s masterpiece began in 1882, only a quarter of the work had been completed at the time of his death.

Since then, there have been nine architects who have taken on the project only to walk away due to its complexity. However, even with this turnover, the project has remained faithful to Gaudí’s original plans and will be completed. The original completion date was set for 2026 to mark the 100th anniversary of the architect’s death, but construction was delayed due to the pandemic, and a new completion date hasn’t been set.

Did you know? Originally, the project was financed by private patrons, but these days, most of the funding comes from the entrance fees. So if you visit, your ticket will contribute to the building of this masterpiece!

No one can deny the grandiose feel of this basilica. With its colorful stained glass windows, countless towers, chapels, and façades, the Sagrada Família feels more like a dreamy fairy-tale castle than a Catholic church. Storytelling can be found in every corner of this structure with an emphasis on nature.

The Sagrada Família’s many symbols

There are three intricately designed façades to the Basilica, and each has detailed motifs that reflect a moment in Christ’s life.

The Nativity façade has animal and human figures while the Passion façade is much more dramatic with pillars that appear to have skeletal sculptures. The Glory façade is one of the most striking, featuring scenes of the Last Judgment, including both heaven and hell. It also grants access to the Basilica’s central nave.

There are 18 towers in total. The tallest and most majestic symbolizes Jesus Christ and, once completed, will measure 566 feet. That will make it the tallest church in the world — surpassing the Ulm Cathedral in Germany. The other towers represent the Virgin Mary, the apostles, and the evangelists.

Interior of the Sagrada Família

For the interior of the church, Gaudí kept with the nature theme by avoiding straight lines. Instead, he created an environment with winding tree-like columns and a symphony of colors.

Towering stained glass windows dominate the interior of the Sagrada Família with ever-changing shades depending on the time of day and even the weather. A sunny day will produce dynamic explosions of bright color while a cloudy day will reflect soft and soothing hues.

Fun facts about the Sagrada Família

Here are seven fascinating facts about the Sagrada Família you might not know. Of course, you’ll learn many more on our guided tour of Barcelona’s best architecture.

How to plan your visit to the Sagrada Família

I highly recommend taking public transit here instead of a car so you don’t have to deal with parking.

Here are the public transportation networks that serve the Sagrada Família.

La Sagrada Família is open Monday through Friday from 9 a.m. to 6 p.m.

COVID-19 note: Opening dates and times could change depending on the COVID-19 situation, so be sure to check before your visit. If you’re visiting with our tour, we’ll take care of this for you. The Sagrada Família follows the COVID-19 rules established by the Ministry of Health. Currently, masks are required to enter. For the most updated information, check here.

Where to buy tickets for the Sagrada Família

You can buy tickets on the official site or on the app and then present the voucher either in printed form or on your phone.

If you have a change of plans, you can request a refund 48 hours before your visit. Don’t forget that part of the entrance fee helps with the costs for completing the church!

You can also join a walking tour to visit the outside of the basilica, with its multiple façades, plus other landmarks such as Casa Amatller, Casa Batlló, the Recinte Modernista Sant Pau, and more. Get tickets here to explore some of Barcelona’s best architecture, including La Sagrada Família basilica. If your plans change, you can request a refund up to 24 hours before the start of your tour.

How to dress for the Sagrada Família

Remember you are entering a place of worship. Visitors should dress appropriately, meaning tops that cover the shoulders and shorts and skirts that come down to at least mid-thigh. Hats are not allowed.

The Sagrada Família is a moving and mystical place — there’s a reason it draws millions of visitors a year.

But it’s just one of many Modernist gems in Barcelona. There are more masterpieces by Gaudí and his contemporaries, several found along the lovely Passeig de Gràcia.

To learn more about La Sagrada Família and other architectural treasures in Barcelona, join us for our Best of Barcelona Architecture Walking Tour.

The volume of artworks in Rome is overwhelming. You could spend an entire week just in the Vatican museums alone. But once you’ve seen the greatest hits like…

Guide To the Colosseum: How To Visit and What To See

Conquering the test of time, the Colosseum is a majestic symbol of a past civilization that still awes visitors today. It reflects the engineering genius and strength of…

When To Take a Guided Tour (and When Not To)

As a tour guide, I will be the first to admit that there’s a lot of stereotypes about guided tours that are true. Good and bad. They definitely…