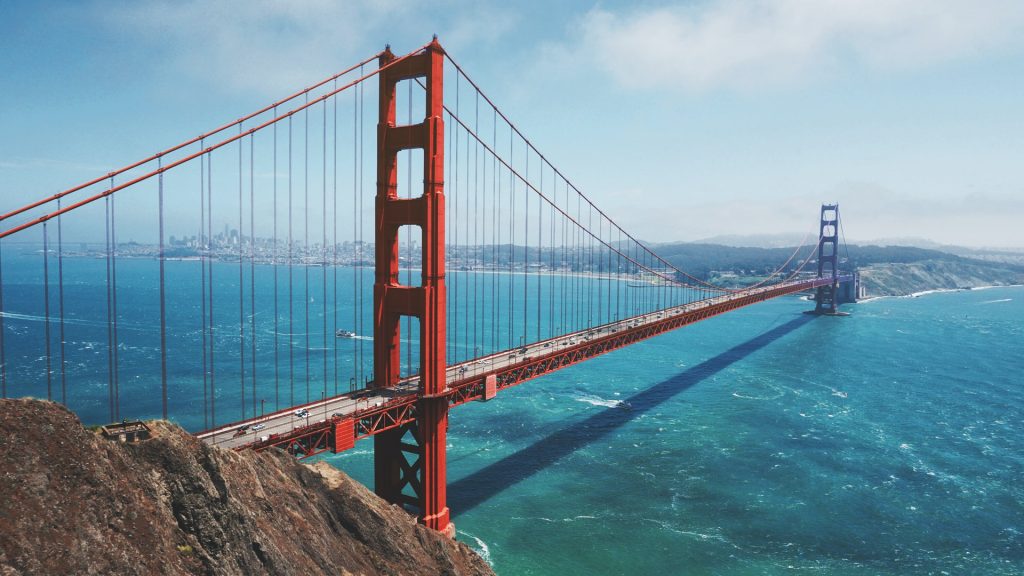 Growing up in the Bay Area, I remember visiting the Golden Gate Bridge one time in high school when we had exchange students from England staying with us. It was their very last day here, one of those days in SF that starts out glorious and sunny and ends gloomy and gray.

As we made our way from downtown to the west side of the city, it seemed like the day turned to night in about 30 minutes. But we persevered. I took them down to Fort Point where you can get one of the best views of the bridge. When we got there, all we could see was a cloud of billowing fog — the bridge was almost invisible.

Don’t let that story discourage you. Experiencing the Golden Gate Bridge, whether from a distance or just barely peeking out of a cloud, is an essential San Francisco activity. In this guide, I’ll share what makes this bridge so special, how it got here, and how you can enjoy it on your trip to SF.

Why I Love the Golden Gate Bridge

The bridge is more than a piece of infrastructure. It’s something magical.

I’m a bit spoiled because I was raised here, but that bridge truly deserves all the acclaim it gets. It’s the most photographed bridge in the world — and for good reason.

How San Francisco Got Its Golden Gate Bridge

The Golden Gate Bridge runs almost 2 miles over the Pacific Ocean connecting the city of San Francisco with Marin County to the North.

It was officially opened to the public in 1937 and was the brainchild of a man named Joseph Strauss (no relation to Levi of jeans fame).

Nowadays, it’s hard to think of SF being separated to its neighbors in the north and east, but for much of the first part of the 20th century, that was the case. Neither the Bay Bridge or the Golden Gate Bridge existed until the very late 30s. Dreams of connecting the two had been around since the Gold Rush, but they never came to fruition until much later.

The original concept of the bridge was met with some resistance for a couple reasons:

A man named Leon S. Moisseiff proposed an idea for a suspension bridge that could swing more than 2 feet in strong winds (or something worse). And an architect from nearby Oakland, Irving F. Morrow, brought the idea to life with the iconic orange and art-deco style of the towers you see today.

Construction began in 1933. As you can imagine it was an immensely stressful jobs. The workers on the bridge called themselves “The Halfway to Hell Club.” Yet despite the incredibly perilous conditions the crew was subjected to, there was only one casualty in the first four years of work on the bridge. They had a safety net below that saved 19 lives. Unfortunately, in February 1937 — two months before the opening of the bridge — a scaffold fell through the net, killing 10 workers.

The bridge officially opened to the public on April 19, 1937. The next day, Franklin Roosevelt officially declared it open to traffic.

The Golden Gate Bridge is a marvel of engineering and an American icon. It was named one of the Seven Wonders of the Civil Engineering in the world in 1994. That puts it on par with the Channel Tunnel and the Panama Canal, in case you’re curious.

When you’re in San Francisco, seeing this bridge is one of those bucket-list items you can’t skip. You can see it at plenty of spots around the city. Here are just a few:

Of course, you can drive across the bridge or bike it, but there’s nothing quite like riding by it on a Golden Gate bay cruise. Part of the reason we offer the bay cruise as an optional way to end your walking tour of Fisherman’s Wharf is because it offers you a closer look at this landmark (great for photos) and a way to really experience it. As you ride, you’ll learn more about the bridge as you enjoy the beauty that’s enchanted millions for the last eight decades.

Sure, the Golden Gate Bridge might seem like one of those attractions that’s simply a photo op, but there’s more to it than that. It’s truly as majestic in person as it appears in pictures.