Ride and Dine at the Historic San Francisco Ferry Building 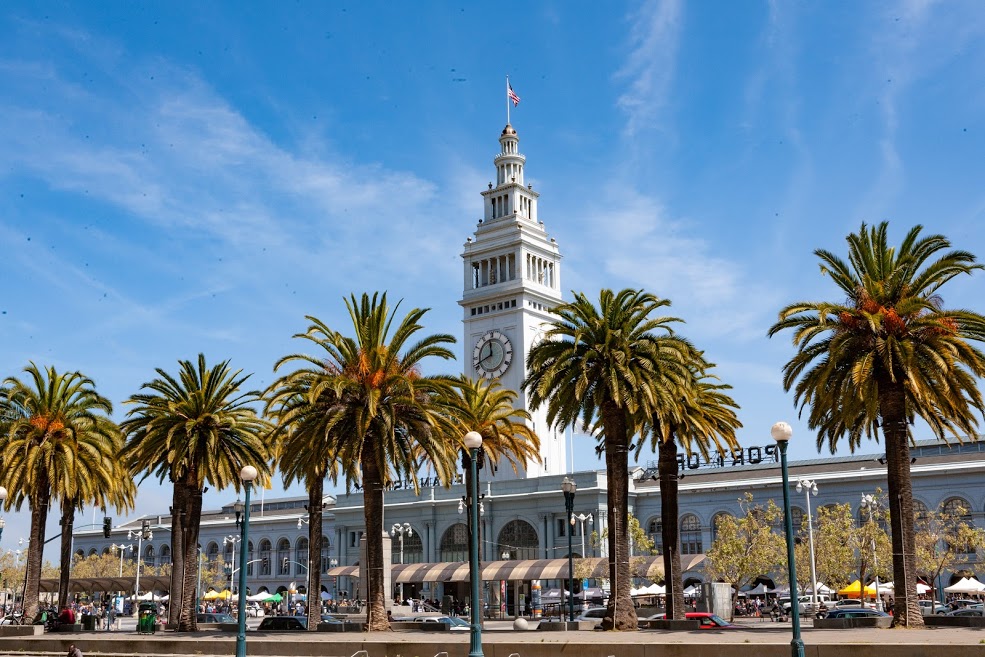 The Ferry Building is one of San Francisco’s oldest and most beloved landmarks.

Built in 1896 at the terminus of the city’s grand boulevard, Market Street, the Ferry Building was the central transportation hub for almost four decades. In its heyday in the 1930s, over 50,000 people a day passed through its portals.

The ferry building survived two major earthquakes before being converted into an array of markets and retail shops with an inviting front plaza lined by palm trees. Today, people love to visit the Saturday Farmers Market to enjoy the fresh California produce or other regional treats. Stroll along the waterfront to admire the ships coming in and out of the port. You can even hop on one of many ferries and imagine a time before the bridges — when San Francisco could only be reached by water or from the peninsula.

From the history to the entertainment to the food, the Ferry Building is really a must-see for anyone visiting here, especially if you have limited time or are on a budget.

Let me tell you why.

The Ferry Building: Main Point of Entry to SF

Designed by A. Page Brown, a young New York architect known for classical Beaux-Arts style, the ferry building was inspired by a combination of classic Roman architecture and the Giralda bell tower of Seville, Spain.

Since the building opened in 1897, people have considered its gorgeous facade as the perfect grand entrance to San Francisco from the water.

Fun fact: It’s one  of the only remaining buildings left in San Francisco that was constructed prior to 1906.

The structure survived the 1906 earthquake and subsequent fires thanks to the U.S. Navy and city fire boats that doused it with salt water pumped from the bay. Saving the ferry building was considered vital because it offered an escape route from the burning city and preserved the gateway for incoming supplies and relief being sent in.

As the city rebuilt after the earthquake, traffic increased well into the mid-1930s. In 1930, there were 43 boats carrying some 47 million passengers and more than 6 million vehicles over a dozen routes. Between the network of ferries, cable cars and street cars, the ferry building was at the heart of this workingman’s city, even during the Great Depression.

Then automobiles came, spelling the end for the Ferry Building’s glory days:

How to Make the Most of Your Ferry Building Visit

Dine at the Ferry Building Marketplace

The Ferry Building Marketplace is a huge dining hall inside the main building, featuring several specialty food vendors and local merchants from all over the Bay Area under one roof. One of my perfect days in San Francisco is to grab lunch at the marketplace and take a ferry to Sausalito or Angel Island.

At the Ferry Building, you’ve got plenty of dining options. Here’s a sampling of some of the cuisine you’ll find:

Whatever you end up choosing, you can always get it to-go, and take it aboard the ferry to enjoy on the water.

Once at Sausalito or Angel Island, take a couple hours to enjoy the sites and views of the San Francisco skyline. Depending on your mood, you can get in a workout on a strenuous cliffside hike or do some leisurely window-shopping and take in a few art galleries.

I generally aim to take the return ferry around sunset. Admire the Golden Gate Bridge in the background, and watch the fog rolling in. You really can’t ask for a more iconic day in the bay, and you don’t have to break the bank to do it.

Guide tip: Bring a wind-breaker! Even if it’s a warm day, I promise you it will be cold on the water, and the extra layer will help.

Getting to the Ferry Building

The Ferry Building is located where Market Street meets the water on the Embarcadero. It’s easy to get to via public transport (MUNI or BART) at The Embarcadero station just across the street or you can opt to take the ferry in from one of the surrounding cities, such as Oakland, Alameda, Berkeley, and Larkspur.

Guide tip: Parking can be difficult and pricey downtown, but I find it’s easiest at Pier 3, just north of the ferry building, or the parking structure at the Embarcadero Center on Clay Street in between Battery and Davis streets.

Valet parking is also available at the Ferry Building Monday through Friday if you don’t mind spending the $15 per hour.

The Women Who Saved the Bay

I have a little more history I want to share with you. This is especially fascinating since it shows how women played an important role in shaping San Francisco at a time when women often weren’t at the forefront of the public sphere.

In the early 1960s, a woman named Sylvia McLaughlin began noticing that the San Francisco Bay was shrinking due to the wetlands being filled in. She and her wealthy mining magnate husband lived in Berkeley Hills, and she was accustomed to looking at the window and admiring the view of the water when she noticed the water was disappearing.

She shared her concerns with her two friends, Kay Kerr and Esther Gulick, and together with some investigation, they discovered that the city of Berkley was planning on filling almost 2,000 acres of the bay without any community input.

So they formed an organization called “Save The Bay” and met with several environmental agencies to see what could be done.

The three women sent out hundreds of letters calling attention to the destruction of the bay and requesting $1 contributions to join their group. The response was overwhelming and contributions poured in. When the media started to notice, powerful politicians came forward to join their cause as well.

By 1965, the San Francisco Bay Conservation and Development Commission was formed to safeguard the bay. Today, nothing goes into the bay without the BCDB’s approval, and the ferry service is no different.

Think about what almost happened!

Had the city of Berkeley been able to fill in those 2,000 acres, we could have lost the ferry system entirely, among many other things. The San Francisco Bay is a meeting of freshwater and saltwater unlike any other and hosts over a hundred species of fish, a huge sea lion population, and several pairs of migratory birds.

Thanks to these three women, they both saved the bay and helped launch the American environmental movement.

Where can I find the ferry schedule and how much does it cost?

There are two ferry agencies that depart from here, and you can find the rates and schedule information on their respective websites:

Average cost is around $11 each way, depending on where you go. Be sure to pay attention to the weekday vs. weekend schedule.

Do the ferries have an audio tour included?

Commuter ferries do not have audio tours included to identify sights along the coastline, but these ferries are much less expensive than the sightseeing cruises that depart from Fisherman’s Wharf.

What are the hours of the ferry building and is there an admission to get in?

The ferry building and marketplace are free and open to the public seven days a week. Hours for individual businesses may vary, please check their website for specific merchant hours.

Guide tip: Admission is only required if you ride the ferry or purchase food. You are welcome to bring your own food and enjoy the waterfront seating without any charge.

A Perfect View of the San Francisco Ferry Building

Bay Area residents adore their ferry, and I certainly agree!

It’s the one thing I recommend to everyone who visits this city no matter the season. It’s truly one of the best ways to take in all the beauty the Golden Gate Bay has to offer.

And while the Ferry Building’s tall blue clock tower can be seen from several points in the city, the best view, in my opinion, is from the water when you approach the port at night. I love the way the city skyscrapers tower in the background, shrouded in white fog.

It’s beautiful and haunting at the same time and makes for some great Instagram photos. (Remember to tag @KarlTheFog. Yes, the fog here has a name.)

Even if your schedule doesn’t allow the time for a ferry ride day trip, the building itself is still worth visiting. Whether you wander along on your own or take a guided tour with us, this building and market is a celebration of local culture and cuisine that should not be missed.