The Griffith Observatory: Where to Find LA’s Biggest Stars 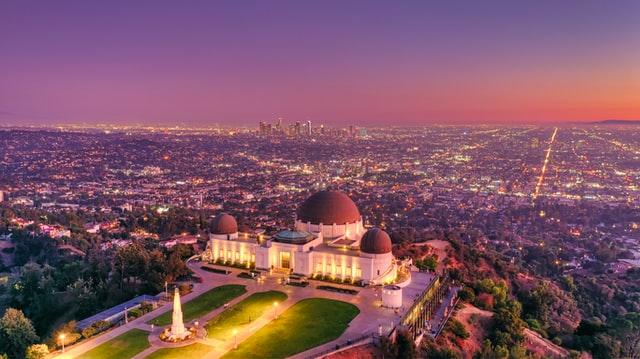 When you think of LA, the first things that come to mind are probably movies, celebrities, the Hollywood Walk of Fame, and the surfers of Venice Beach.

But Los Angeles has a fascinating history that goes beyond movie-making and beaches. One of LA’s historical jewels — beloved by locals and frequented by tourists — is the Griffith Observatory. This 1930s Art Deco structure sits over 1000 feet above sea level, wedged between the famous Hollywood sign behind it and the picturesque Los Feliz neighborhood below.

Its location and the views it affords are as much a destination as the observatory itself. Before you visit this (free!) attraction, let’s learn a little bit more about why it’s so special and what you should see when you go.

From Ranches to Riches: A History of the Griffith Observatory

The Griffith Observatory exists today because of one man’s love of science and astronomy and his desire to make LA a more beautiful place for its residents.

Today, it’s the crown jewel of LA’s Griffith park — one of the largest municipal parks in the United States, at over 4,210 acres. In the 18th century, the Spanish governor of California presented the land that is today Griffith Park to Corporal Jose Vicente Feliz, as a gift for safely bringing the first Spanish settlers to California.

In those days, the land was known as Rancho Los Feliz. Today, the neighborhood the park sits in is still known as Los Feliz. The Los Feliz neighborhood is loved for its charming cafes and restaurants, pedestrian-friendly streets (a rarity in Los Angeles), and its eclectic mix of residential architecture.

It wasn’t until 1882 that Rancho Los Feliz became Griffith Park. That year, Welsh immigrant Griffith J. Griffith purchased the land after striking it big in the silver mining industry. A philanthropist and lover of his adopted city, Griffith gave the land to the city of LA as a Christmas present in 1896 so it could be used as a public park.

But there was a catch. Isn’t there always a catch?

Griffith’s will left a fund with specific instructions to use the park to build a Greek amphitheater and “an observatory and hall of science.”

In his own words:

It must be made a place of recreation and rest for the masses, a resort for the rank and file, for the plain people. I consider it my obligation to make Los Angeles a happier, cleaner, and finer city. I wish to pay my debt of duty in this way to the community in which I have prospered.

Per his wishes, the Greek Theatre was constructed in 1930, and the Griffith Observatory followed in 1935.

What Makes the Observatory So Incredible

Since it opened on May 14, 1935, the Griffith Observatory has offered free admission to the public and remains free to this day. This includes free public telescopes on the grounds with guidance from demonstrators so you can learn more about our galaxy. Inside, the observatory features two main exhibits: Hall of the Eye, which focuses on human exploration and the continuing discovery of space, and Hall of the Sky, which features a more in-depth look into the science of the solar system.

Beyond that is the crown jewel of the Griffith Observatory — the Samuel Oschin Planetarium — a state-of-the-art, 290-seat planetarium showcasing interactive scientific lectures presented by experts in the field. While admission to the observatory is free, planetarium shows range from only $3-$7 — probably the cheapest night out in Los Angeles.

And if you’re an architecture buff, the observatory building itself is a breathtaking example of the Art Deco style. Some key features include the mural painted on the ceiling of the central rotunda, the sundial in front of the observatory’s entrance, and the six statues surrounding it, depicting six of the greatest astronomers in history.

Star Party at the Griffith Observatory

If your stars — and travel plans — align with the observatory’s most special night of the month, you might even be able to attend a star party. Nicole Kidman and Meryl Streep probably won’t be there, but you’ll see plenty of other stars.

On one Saturday of each month from 2 p.m.-9:45 p.m., the Griffith Observatory invites you to an afternoon and evening of gazing at the sun, moon, and thousands of stars, led by expert astronomers on the open lawns of the observatory. It’s a pretty epic way to spend a day in Los Angeles.

Things to Do in the Neighborhood

As it happens, the Griffith Observatory is located in one of the most beautiful and pedestrian-friendly neighborhoods in Los Angeles: Los Feliz.

Los Feliz has two main streets running through it which are parallel to each other, running north and south. They are Vermont Avenue and Hillhurst Avenue. Vermont Avenue leads directly north to Griffith Park from the Vermont–Sunset subway station and is peppered with cafes, vintage shops, an old movie theatre, and restaurants. Stop here for a leisurely stroll and a bite to eat before or after your visit to the observatory. Just a couple of blocks east is Hillhurst Avenue, which also features some fantastic restaurants where locals like to hang out.

Planning Your Visit to the Griffith Observatory

Ready to visit? Here are some answers to commonly asked questions for travelers looking to visit the observatory for the first time.

What is the best time to go to the Griffith Observatory?

The observatory is always busy. In the evenings, the conditions are of course better for stargazing, so it can get pretty packed. During the day, people flock to take pictures of the Hollywood sign and see the views of Los Angeles below. However, if you go during the day, you can do more. During the day you can not only see the exhibits inside the observatory, but you can also hike through Griffith Park, which cannot be done at night.

Is the observatory completely free?

Admission to the observatory is always free and you can also explore the grounds without having to go inside. Lectures at the Samuel Oschin Planetarium are between $3-$7.

How do I get to the Griffith Observatory?

The Griffith Observatory is located east of Hollywood in Los Feliz and is very easy to get to. You can go by car directly through Griffith Park and up to the observatory where there is a small paid parking lot as well as street parking. If you prefer to avoid searching for parking (as the observatory can get very busy) another option is taking the DASH shuttle bus from the Vermont–Sunset Red Line Metro station directly to the observatory. It runs throughout the day, every day and the fare is only $0.50.

If you’re feeling adventurous, you can also hike up to the observatory from Griffith Park. If you use the Vermont Street entrance, it only takes about 30 minutes from the bottom of the hill to the observatory.

The Griffith Observatory: An Otherworldly Night Out

If you’re planning a trip to LA, there is more to this city than celebrity sightings and beachside lounging. Los Angeles has an incredible architectural history and some amazing neighborhoods, and touring the Griffith Observatory lets you experience all of that and more in just a few hours.

Plus, with great views of the stars in the sky and perfect vistas of Los Angeles itself, this free attraction is too good to miss.