Guide to Visiting the Chrysler Building 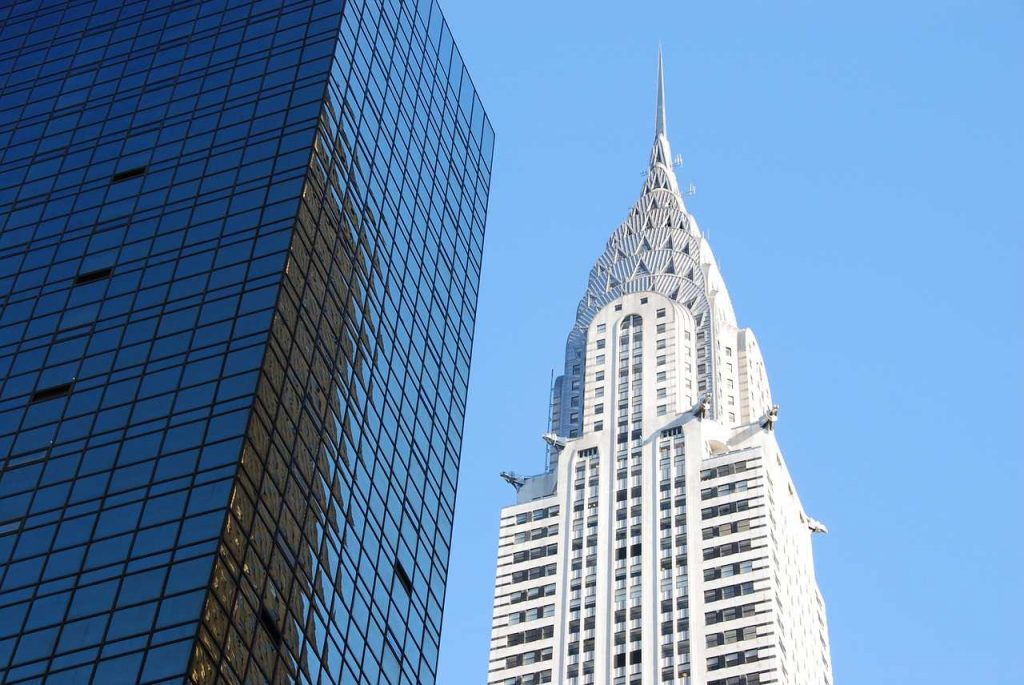 This post is a guide to visiting the Chrysler Building. You’ll learn a little history, where it’s located and what to do there. While this is one of the most iconic buildings in NYC, other than the lobby, it’s not open to the public. However, I’ve got an inside tip on how you can actually go up the building and get terrific views for free.

The building was opened by Walter Chrysler, the head of the Chrysler Corporation and served as their headquarters from the 1930’s to mid-50’s. It was built as part of an ongoing building boom that resulted in NYC having the world’s tallest building from the early 1900’s to the 70’s.

The Chrysler Building is well known for its distinctive Art Deco architecture with its crown and spire at the top. William Van Alen, the architect, wanted to not only maintain the visual signature of art deco, but also create striking visuals that would symbolize the Chrysler Corporation as well.

Each corner on the exterior of the 31st floor, has steel embellishments that are reminiscent of gargoyles on gothic cathedrals. These embellishments resemble hood ornaments installed on Chrysler vehicles at that time.

For even more in depth history, make sure you read about the History of the Iconic Chrysler Building.

Tip: We cover the outside of the Chrysler Building in our 1 Day 6 hour Tour, where you’ll explore many more iconic landmarks like this as well.

At the time construction plans began in 1928, the Woolworth Building was listed as the world’s tallest and Walter Chrysler wanted to make sure his building surpassed it.

However, that same year, a new office building on 40 Wall Street downtown had plans to start construction and they too wanted to not only surpass the Woolworth Building, but the Chrysler Building as well, and the “Race into the Sky” began.

After both buildings were completed, the 40 Wall Street Tower wound up surpassing the Chrysler Building in height by a few feet. Knowing this would happen, William Van Alen, secretly hid a 125 foot spire inside a hidden elevator shaft.

On May 26, 1930, the 40 Wall Street Tower was opened. Then one day after, Van Alen hoisted the spire on top of the Chrysler Building, enabling it to now surpass 40 Wall Street. Walter Chrysler was able to fulfill his dream of having the tallest building in the world.

Where is the Chrysler Building?

It is located at 405 Lexington Ave in Midtown Manhattan next to Grand Central Terminal. It can best be reached by taking the 4,5,6 train (green line) or 7 train (purple line) to Grand Central and take a 2 minute walk.

You can find it here on google maps.

Be sure to read our blogs about Ways to Travel New York City and How to Buy and Choose Your Metrocard. Those are helpful guides to show you how to make your way around.

While for most people, taking pictures of its beautiful art deco design from the outside is enough for most. However, some people may not realize that you can actually enter the lobby.

When you first enter, you’ll notice the dim lighting that is intended to give it a subdued quality, creating an intimate atmosphere and ability to highlight the place. There are 4 elevator banks, each with a different look and digital clocks with futuristic designs.

The biggest attraction though is the giant, beautiful mural painted on the ceiling. It’s named Transport and Human Endeavor, an homage to the Golden Age of Aviation and the Machine Age. There is also a wall panel with fifty different figures modeled after the workers who participated in the building’s construction, such as masons, carpenters, plasterers, and builders.

Up until 1945, there was an observation deck on the 71st floor called “The Celestial”. Visitors would pay 50 cents to go up there and enjoy the views. However, people had to look through small triangular windows created at strange angles that made the experience difficult and unenjoyable for most.

When the Empire State Building opened with 2 observatories at higher levels, guests flocked over there and fewer and fewer came here. Once the observation deck closed, it was used to store radio and television broadcasting equipment.

There was once a private restaurant called the Cloud Club on the 66th to 68th floor for New York’s wealthiest executives. It was a men’s only club and was held mainly for lunch. Opened it 1930, it later closed in 1979. Walter Chrysler himself had a 2 story apartment on the 69th and 70th floor with a fireplace and a private office.

Nowadays, there is still no observation deck, but if need some teeth cleaning you can actually make your way up as high as the 69th floor and book a dentist appointment. The only way the public can go up the elevators is to see a dentist in one of the offices up there.

Tip: You can just do a simple google search and you’ll find several dentist offices on the 69th floor and 70th floor. Perhaps, getting your teeth crowned isn’t so bad when you’re hundreds of feet up in the air, overlooking gorgeous views of NYC.