A Walk Down the Passeig de Gràcia: Everything to See and Do
Welcome!

A Walk Down the Passeig de Gràcia: Everything to See and Do 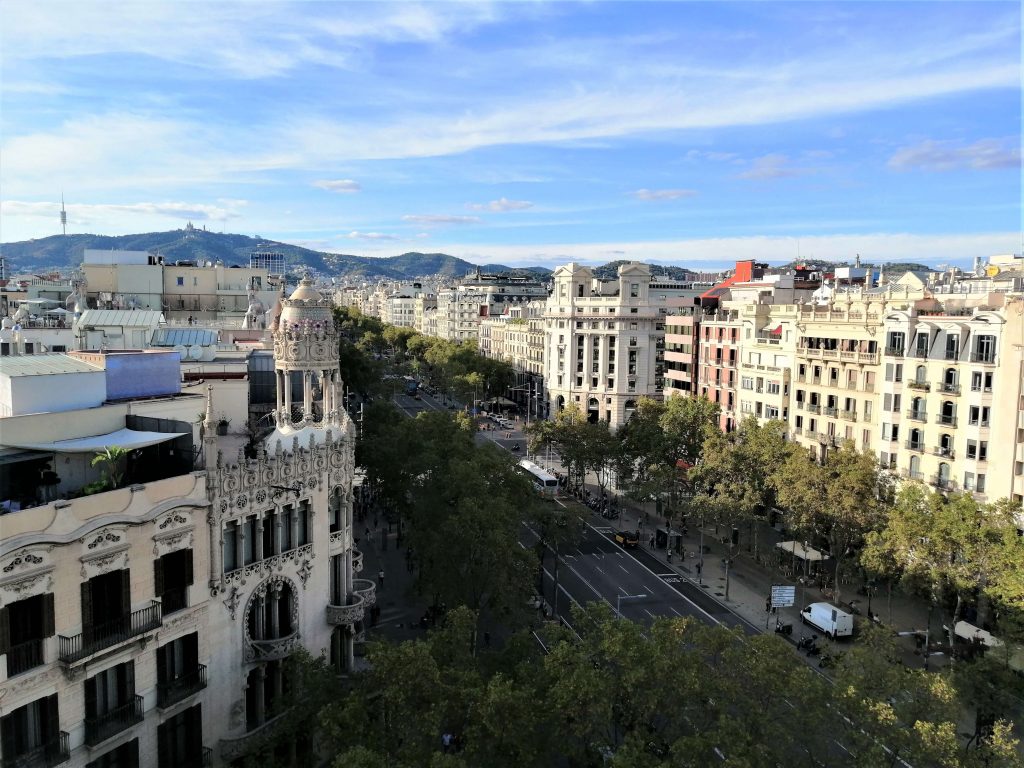 “Here we come to the Catalan Champs-Élysées!” That’s what most tourists think when they see the Passeig de Gràcia for the very first time. But this avenue has a totally different charm — and also a different story — that will enchant you, wherever you start your walk from.

I’m a local guide here in Barcelona, and it will be a pleasure to show you my personal walk down Passeig de Gràcia. I’ll be starting in the north and heading south. This avenue, developed in 1827, was originally created to connect Barcelona to the ancient town of Gràcia, which was not part of the city until 1897, when modernist architecture was reaching its highest point.

As a consequence, Passeig the Gràcia became the heart of the Catalan bourgeoisie, who could afford nice modernist mansions designed by the most famous Catalan architects, even by Antoni Gaudí himself!

Come along as we explore the many different things to do on the Passeig de Gràcia in Barcelona.

This neoclassical palace can easily go unnoticed among the many over-decorated houses of Passeig de Gràcia, but if you give it a chance, you’ll be happily surprised. Once the residence of the rich Robert Robert i Surís, the Palau Robert is now home for many exhibitions you can visit for free!

And the surprises aren’t over. The exhibitions change depending on the time of year, so there’s always something new to see.

Guide tip: If you take a look behind the palace, it’s highly likely you’d find a photo exhibition in the back garden. Don’t miss it!

This last Gaudí’s masterpiece is a declaration of love to nature. Inside, the king of Catalan modernism meant to sum up all the characteristics of his previous works, where nature was the star.

If you decide to enter la Pedrera and go up to the terrace, you’ll feel like you’re climbing a mountain and swimming in the sea at the same time. The “waves” will take you to the beautiful rooftop. And the view is priceless! From here, you can see the center of Barcelona, the Sagrada Familia and even Tibidabo hill.

3. Find a book in your native language at La Casa del Llibre

Are you in Barcelona and want to read a book, but you don’t know Spanish or Catalan? Don’t worry, because La Casa del Llibre — translated as The House of the Book — is there for you. In the heart of the Passeig de Gràcia, this bookshop has plenty of English volumes to offer.

And if you want to read about Barcelona in French, German, Italian or in many other languages, it’s here too. In La Casa del Llibre, there’s an entire section for travelers who want to know more about Barcelona and its history.

4. Ponder the meaning of beauty at the “The Apple of the Discord” block

Want to hear a story?

Once upon a time, in ancient Greece, the future parents of Achilles got married and they organized a big wedding without inviting Eris, who got really angry about being left out. So she went to the wedding holding an apple addressed “To the Most Beautiful.”

No one knew who deserved the apple between Hera, Athena and Aphrodite, so Paris, a Trojan prince, decided to give it to Aphrodite, who had offered him the most beautiful woman on earth. And that’s how (they say) the Trojan War started.

Now, imagine that Hera, Athena, and Aphrodite are the three most famous houses of the block of the discord: Casa Amatller, Casa Batlló, in the picture above, and Casa LLeó i Morera, in the picture below.

Which one would you give the apple to? Is it hard to decide?

Barcelonians agree. We call the block the La Manzana de la Discordia because manzanas (apples) is the name for blocks in the Eixample district.

Would you like to know more about those Barcelonian apples? Do you want to know the story hidden behind those buildings? Then, come walk with us!

Just outside Casa Lleó i Morera our walking tour starts. As we tour the Eixample district and stroll along part of the Passeig de Gràcia, you’ll learn the secrets of these marvelous modernist architectural treasures in Barcelona.

See Barcelona's Modernist treasures, all on one tour

If you decide to join us, we’ll bring you from the three houses of the Block of the Discord right up to Sant Pau Hospital, passing by other modernist houses, such as Casa de Les Punxes and Palau Macaya, along the way. And, of course, we’ll see the unmissable Sagrada Familia!

6. Capture the beautiful details of the Passeig de Gràcia

While walking down the Passeig de Gràcia, don’t forget to glance at (and photograph) the many modernist details of this magical avenue.

They were designed by Pere Falqués i Urpí at the beginning of 20th century.

These lampposts, which you can see in my photo above, totally match the modernist style of this avenue. They are made of wrought iron, the most commonly used material during that period. You’ll see the same wrought iron used for the balconies of La Pedrera.

If you look down from the lampposts, you’ll notice benches made of ceramic pieces. They were put together with the trencadis technique used by Gaudí to create decorations made of broken pieces of different materials

Even if the tiles are a bit worn, due to many people walking on them every day, you can still see the details of the walking path’s tiles designed by Gaudí.

If you think the Passeig de Gràcia is one of those expensive places where, if you want to enjoy the view, you need to buy a pricey drink on the terrace of a bar, you might be wrong.

Here are two viewpoints I suggest you visit.

Just go up on the last floor of H&M to enjoy this view while sipping a coffee.

On the last floor of this hostel — located in the corner with Carrer del Consell de Cent — you can enjoy the beautiful view you can see in the photo above.

In my opinion, this is the best view of Passeig de Gràcia and you can even glimpse both Tibidabo hill and the sea!

Savings alert: You can enter the terrace for free, but if you want to enjoy the view with a coffee or a beer, you can buy it at the second floor’s bar, which belongs to the hostel.

8. Take a look at the latest works of art at Villa del Arte

The Villa del Arte is a very young art gallery, opened in 1999, where you can find the latest creations from emerging national and international artists. Everyone can enter the gallery for free, but buying a piece of art is a tad pricier.

Guide tip: You can find two more branches in the Gothic Quarter, plus in the entrance and in the garden of the Mandarin Oriental, a very luxurious hotel located in Passeig de Gràcia.

On the left side of the art gallery, you’ll come upon this huge restaurant that will leave you speechless. If you like a wide selection of delicious dishes, this is the place for you.

In El Nacional, you’ll find many different kinds of food and drink depending on where you decide to sit. There is an area that specializes in seafood, one in meat, a tapas corner and four different types of bars.

In this avenue, even cinemas have a long story. In fact, the Comedia cinema, located in the corner between the Passeig de Gràcia and the Gran Via de les Corts Catalanes, was first a private house  —  called Palau Marcet  —  and since 1941, a theatre for Spanish and international contemporary plays. In 1960, the Comedia Theater became a cinema where people still go today.

Would you like to go, but you’re afraid of ending up watching American movies dubbed in Spanish? Don’t worry, this won’t happen. In the Yelmo Cines Comedia, you can enjoy movies in their original language with subtitles.

What to see near the Passeig de Gràcia

If you get away just a couple of blocks from Passeig de Gràcia, there’s much more to see nearby. Here are a few of my favorite places to visit. If you have time, you should definitely add them to your list.

A Contemporary Art Gallery, just behind the Seat House, where Passeig de Gràcia meets the Avinguda Diagonal, one of the longest Barcelonian streets.

An entire modernist building dedicated to the Catalan artist Antoni Tapiès, this foundation is part of the many buildings you can visit for free during the 48H Open House Barcelona at the end of October.

Art hunt: There are a couple of other buildings in Barcelona with the same exposed bricks texture. Where can we find them?

The Egyptian Museum is a great place for anyone interested in Egyptian history and art. It offers many exhibitions for a reasonable price. Be sure to check them out!

Basilica of the Immaculate Conception

One of the least known basilicas of Barcelona, this Gothic church is what is left of the ancient Convent of the Holy Mary of Jonqueres.

When I found it, I was really surprised, the inside is astonishing and totally underestimated.

This market was built in the late 19th century, during the golden period of Barcelonia’s covered markets. It stands out for its location — on the right side of the Eixample district — its entrance full of beautiful flowers and its roof made of ceramic pieces. Gaudi’s echo again!

Discovering the Passeig de Gràcia and Beyond

There’s so much to see along the lovely Passeig de Gràcia. If you walk down this street following the route I suggested above, you’ll end in Catalonia Square. This huge square was (and still is) the link between the old and the new Barcelona.

This square is located exactly in the middle between Passeig de Gràcia, La Rambla and Portal del Angel, which leads you to the Gothic Quarter.

Want to keep going? From here, you can start another walk that will let you dive into a totally different story. And if you’re looking for more stories, walks and insider secrets of this beautiful city, you can always join us on a guided tour of Barcelona.

If you want to jump from one century into another with just a few steps, the Gothic Quarter in Barcelona is the place for you. Here, you can…