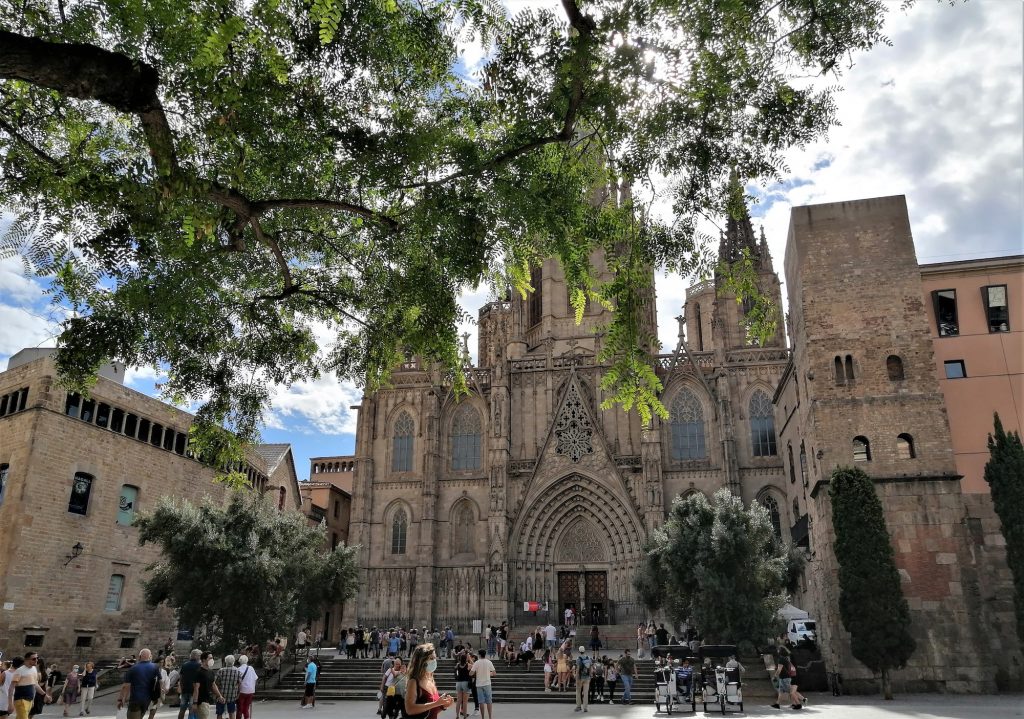 If you want to jump from one century into another with just a few steps, the Gothic Quarter in Barcelona is the place for you. Here, you can find contemporary art, the square where Catalan politics was born, a church that has lived as many lives as a cat and, of course, a whole museum that can tell you all about that and more.

I’m a local guide here in Barcelona and excited to share with you the secrets of my city. Come along as we explore Barcelona’s breathtaking Gothic Quarter.

Why is it called the Gothic Quarter?

First, what exactly is the Gothic Quarter and why is it called that?

The Gothic Quarter is located in the historic center of Barcelona. You’ll find it between two streets: the famous La Rambla (sometimes called Las Ramblas) and Via Laietana. You can easily get there by metro from the Liceu or Jaume I metro stations.

Despite its old age, it was named the Gothic Quarter, or Barrio Gótico in Spanish, only a century ago. The reason? To attract more tourists, particularly with a little help from its beautiful neo-Gothic cathedral.

Before that, back in the Middle Ages, the true heart of this quarter was the Jewish neighborhood — El Call — named like this after the Jewish word for community (“cahal”).

Want to see everything this historic corner of Barcelona has to offer? Let’s dive in together to every spot you can’t miss while visiting Barcelona’s Gothic Quarter.

1. Cathedral of the Holy Cross and Saint Eulalia

The stunning Cathedral of Barcelona, also called the Cathedral of the Holy Cross and Saint Eulalia, is a must visit in the Barrio Gótico. If you decide to start this itinerary from Plaça de Catalunya, the central square of Barcelona, you’ll come by way of Via Laietana or Portal del Ángel.

The cathedral dates back to the 4th century, but it’s been renovated many times over the years, including for the Universal Expositions in 1888 and in 1929. As a result, it’s had a number of styles through the ages. You might think of it as different lives through different eras: Paleocristian to Visigoth to Romanesque.

If you want to visit the cathedral, check the hours before you go. You can get your entrance ticket online or at the church.

Guide tip: Count the geese! According to the legend, Saint Eulalia, the saint protector of Barcelona, was a geese shepherd who died as a martyr when she was only 13 years old. That is why you can now find 13 geese in the cloister of the cathedral. The legend also says that if only one goose is missing the entire cathedral would fall down. Better keep an eye on them!

The Royal Artistic Circle was founded in 1881 by several Catalan artists as an institution to promote artistic creations. Due to the historical period, this has been the place where many ideas about modernism began.

The museum is now a place dedicated to temporary exhibitions. Be sure to check them out during your visit to the Gothic Quarter.

Undoubtedly the youngest building of Plaça Nova, the presence of the Association of Catalan Architects makes us feel we are in a completely different district, but we are just outside the cathedral on the opposite side of the Royal Artistic Circle.

The interesting fact about this building is the origin of the sand-cast friezes, done by the Norwegian artist Carl Nesjar in 1962. The designs gave new life to one of Picasso’s original drawings.

Guide tip: During the third weekend of October, thanks to 48H Open House Barcelona, you might have the opportunity to visit the COAC — and many more buildings — for free.

4. The kiss mural of Barcelona

“El món neix en cada besada” — translated from Catalan, “A world is born in every kiss” — is the title of the giant kiss you’ll find if you head one block to the right just of the COAC.

This mosaic was created in 2014 to commemorate the 300 years of the siege of Barcelona that put an end to the War of the Spanish Succession in 1714.

This work is a collage of thousands of pictures on tiny tiles that people from Barcelona were asked to take, anonymously, during a moment of total freedom.

The kiss mural, sometimes called the Kiss of Freedom, by artist Joan Fontcuberta is definitely the most Instagrammable spot of the Gothic Quarter. Don’t leave without taking a picture!

5. The History Museum of Barcelona (MUHBA)

The History Museum of Barcelona (MUHBA) is one of the best museums you find in the city. Whether you want to know something about Barcelona or see where all the archeological remains ended up, this is the place.

Even though it has many different branches all over the city, the one that is located in King’s Square is the official and the biggest one. You can enter the museum from the door of Padellás House, an old house in King’s Square now used for the history museum. Then you can dive into the beautiful and very old story of this amazing city.

Savings alert: If you decide to visit this museum on Sunday afternoon after 3 p.m., entrance is free.

The Plaça Sant Jaume, or Saint James Square, has long been the bureaucratic center of Barcelona. Both City Hall and the headquarters of the Catalan government are located in this square, which is named after the first king of the Aragonese dynasty.

Here, you often see people trying to make their voice heard by protesting laws they might find unfair. That is also a place where people of other nationalities stand up against any injustices occurring in their country. As such, this square isn’t only a place for Catalan politics, but also for global affairs.

The sight you can’t miss here is the gorgeous Palau de la Generalitat. This historic palace, built between the 15th and 16th century, has the first renaissance facade of Catalonia. What’s more, just above the main door, we find the statue of Saint Jordi, or Saint George, the saint protector of Catalonia, celebrated with roses and books all over the city every April 23rd.

There are many legends related to this bridge. One of these tells that if you look at the skull under the bridge and make a wish, that wish will come true.

This is the saddest story of the Gothic Quarter.

The Plaça de Sant Felip Neri is located in the heart of the Jewish neighborhood. As you can see in my photo above, the Church of Saint Philip Neri (Iglesia de Sant Felip Neri in Spanish) still has signs of a bombing that occurred in 1938 during the Spanish Civil War. At the time, the church was being used as a shelter for evacuated children. Two bombs dropped by the Nationalist party, led by Francisco Franco, who ultimately won the war, exploded in front of the church, killing dozens

For many years this story was unknown to most tourists. But in 2018, exactly 80 years after that event, the Council of Barcelona finally posted a sign at the entrance of the square to commemorate what happened here.

9. The Church of Holy Mary of the Pine

This church, found between La Rambla and Sant Felip Neri Square, might have been built where the Roman Barcino (that’s the name of the former Roman colony that became Barcelona) began to expand. And it’s there where the first Holy Mary of the Pine was born in 987 AD. Later on, in the 14th century, the church became one of the first examples of Catalan Gothic architecture.

It is said that this church has survived the plague, an earthquake, the siege of the War of the Spanish Succession and a fire during the Spanish Civil War. We should definitely call it a survivor!

Where does the name come from? The most famous legend related to this church tells this story. Many years ago, faithful locals decided to plant a pine tree just outside of the church because the face of Mary, mother of Jesus, was found in the trunk of a pine tree.

The Royal Square is where you can easily find many Barcelonians and a lot of tourists at the same time.

Still part of the Gothic Quarter, but just next to the famous Rambla street, this square is the place to go for a drink with your friends while listening to many different languages.

While you’re there, have a look at the modernist lampposts. They are unusual because they were designed by Antoni Gaudí at the beginning of his career. In the photo above, you can see how he added Mercury’s helmet to the very top. Why? The symbol celebrates Barcelona’s role in Mediterranean trade. (Mercury was the Roman god of merchants — and travelers too!)

Guide tip: You can find another of Gaudi’s lampposts in Pla de Palau, a square located just behind the Barceloneta metro stop.

There are many ways to soak up the charm of the Barrio Gótico. Whether you start from La Rambla or from Via Laietana, you can explore plenty on foot. That’s part of why we love walking tours so much!

If you want to do more than just see this beautiful quarter at a glance but truly get to know it, try a walking tour with someone who daily lives, loves and admires this city. Our Barcelona Ancient Markets Walking Tour includes the Gothic Quarter, the long-running Mercato de la Boqueria, La Rambla and much more.

Top 8 Barcelona Markets and Foodie Experiences You Must Try

Whether you were drawn to Barcelona by the city’s sun-drenched beaches or its spiraling architectural wonders, chances are you happened upon the Catalonian capital to indulge your senses.…