Bye! You have logged out from ExperienceFirst.
Blog · New York · 7 Places to Spend New Year’s Eve in NYC
January 12, 2017 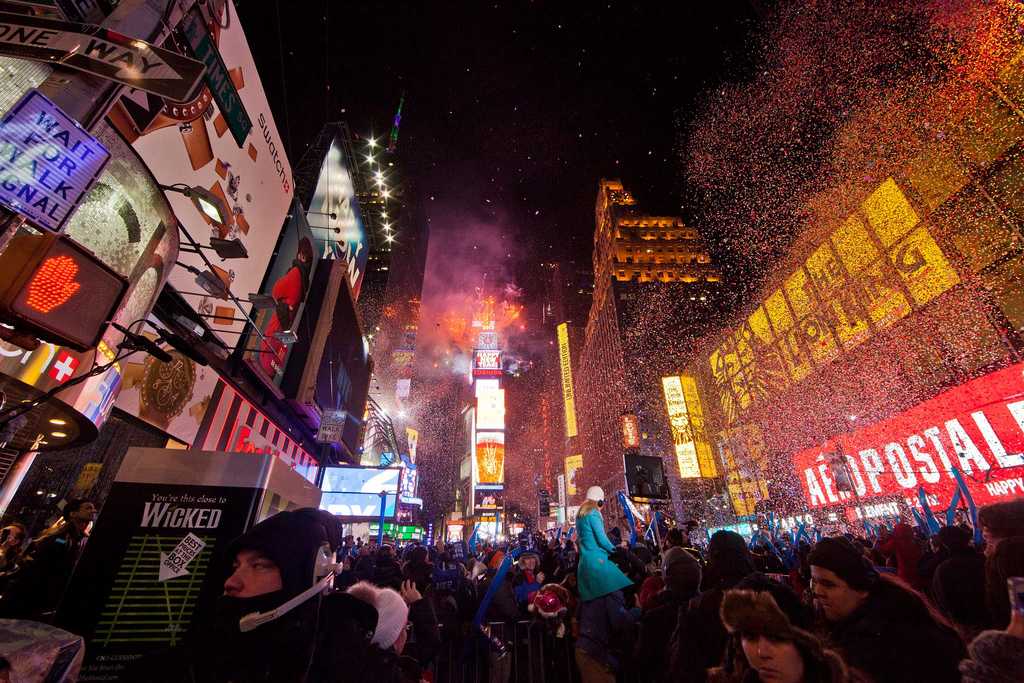 It’s that time of year again! Time to party, time to reflect, time to set new goals…but, mostly, time to celebrate. New Year’s Eve is an exciting event and there are SO many things going on in New York to help you celebrate. Sure, you could just stay inside and watch the festivities from your T.V., but why not end the year with some style? If you’re at a loss for new ideas or just aren’t entirely sure what is happening around the city, not to worry. Here is a list of exciting and fun places to spend your New Year’s in New York City:

If you’re unfamiliar with the Times Square New Year’s Eve celebration, where have you been the past 100 years?? Still, you may know about it, but have no idea how to prepare yourself. Well, first off, expect a lot of people… A LOT of people. The event is completely free, with no tickets involved and it’s estimated that over 1 million people come out every year. Also, expect a very very long night. If you want any chance at all of getting a good view, your best bet is to arrive before noon on the 31st. However, some people show up as early as 6 a.m. If for some reason you can’t make it that early, when you arrive enter from the north to avoid the denser crowd and you might still be able to squeeze your way to a good view. The best place to stand is the intersection of Broadway and 7th Avenue. Also keep in mind, once the event is over, exiting will also take some time. Just be patient and be prepared. Finally, bring snacks and clothes. There won’t be an opportunity to grab some food without risking your spot. And it’s better to have more clothes and a need to remove some items than be freezing for 12 hours. Also, WATER! Stay hydrated. But not too hydrated…as there are no bathrooms in the area, so be ready to hold it. All this in mind, you will have an eventful, unforgettable night and be of a tradition that is a phenomenon around the world.

Any good celebration calls for fireworks, and New York offers the best fireworks from two vantage points in the city. For a fun and educational night, consider taking a Brooklyn Bridge walking tour. This walk into the new year features an introduction with tidbits about the history of the bridge, all leading to the grand finale- a stop on the bridge to take in the skyline and lookout for fireworks. It’s a fun event that offers amazing views and a chance to do something a bit different. If you’re feeling up for it, head out to Prospect Park in Brooklyn. A beautiful park worth exploring on its own, New Year’s Eve will be celebrated with fireworks and live music. Starting at 10:30 at Grand Army Plaza, check out some music and grab some hot chocolate. At midnight the fireworks will begin, celebrating the new year in a festive, laid-back setting.

There are a large number of music events taking stage this year, from Phish at MSG to Cardi B at Knockdown Center in Queens. The Concert for Peace is an annual tradition at the Cathedral for St. John the Divine. This celebration features music, dance and prayer while thousands of guests hold up candles to illuminate the church. For something more swanky, head to Edison Ballroom for the New Year’s Eve Celebration at the Swingin’ Ballroom. Featuring Joe Battaglia and the New York Big Band, each ticket includes a four course meal and the opportunity to show off your dancing skills. Barge Music is hosting a New Year’s concert beginning at 5 and 7 pm out at the Brooklyn Waterfront. This year’s show will feature works by Vivaldi and Bach. Finally, while not technically a concert, Big Apple Circus also has performances that the whole family can enjoy, beginning at 9:30 p.m. New Year’s Eve.

Yearning for a never ending night of drinking and dancing? Grab a ticket for one of these massive, exciting, flashy parties taking place in NYC. For something a bit less pricey and more casual, head to The Ditty in Astoria for a three hour open bar with a champagne toast at midnight. For those of you looking to dance the night away, head to BangOn!NYC’s Time + Space NYE located inside a giant warehouse in Williamsburg or celebrate the 90’s with Y2K at The House of Yes. These huge events are sure to be very energized, filled with wall to wall dancing and music. Each one has it’s own exclusive features and activities. Looking to be a little more glamorous? Head to the Tiki Disco at Le Bain located in the Meatpacking District. This event features Eli Escobar, plus amazing views of downtown, posh drinks and a unique, black-tie meets hipster atmosphere. For something truly one-of-a-kind, celebrate the legend of Prince at the Purple Rain Dance Party. Syndicated Bar & Restaurant in Brooklyn will be restyled with projections of 1984’s Purple Rain and unforgettable classics.

One of the more extravagant experiences, a boat cruise on New York harbor is a fun activity any day of the year, even more so in the hours leading into 2018. There are many cruise lines making trips on December 31, but fair warning, most tend to be quite expensive. For something a bit less expensive, check out New York Water Taxi New Year’s Eve Cruise. The open air top allows for amazing views of the city skyline and maybe even a glimpse at some fireworks. Featuring music, a dinner buffet and a cash bar to keep you entertained while waiting for the big moment. Once the time comes, you can watch the ball drop via live feed from Times Square and set forth on the beginning of a (hopefully) happy and healthy new year.

Exercising through the night isn’t usually how one would spend the holiday, but of course New York turns it into a night of memories and joy. Head to Central Park for the annual New York Runners’ four-mile Midnight Run. The night commences at 10:00 with music and dancing, followed by the kickoff right at midnight with hundreds of other joggers. While you’re running, admire the fireworks and celebrate the camaraderie of a fun run with fellow New Yorkers. Running not your sport? Maybe biking is! Sign up for New Year’s Eve Ride, a free event in which you bike from midtown to the Lower East Side. Starting point is either the Plaza Hotel or Madison Square Park at 9:30 and 10 p.m. respectively. The event is followed by an after-party at the Museum of Reclaimed Urban Space to help you celebrate your ride.

Ring in the new year at one of New York’s most beloved attractions- Coney Island. The New Year’s Eve Celebration at Coney Island is a relatively new tradition, but just as entertaining nonetheless. The famous summertime playground will be reopen for one night only. Take a spin on the ferris wheel, brave the Thunderbolt, watch the fireworks over the boardwalk- it’s an exciting night full of amusement and play. You can even make a stop at the New York Aquarium which will be open until 9:00. Spending the evening at the beach might not have been your idea of ringing in the new year, but the Alliance for Coney Island has established a new and spectacular tradition that will have you coming back for many years to come.