Neighborhood Guide to San Francisco’s Presidio (By a Local) 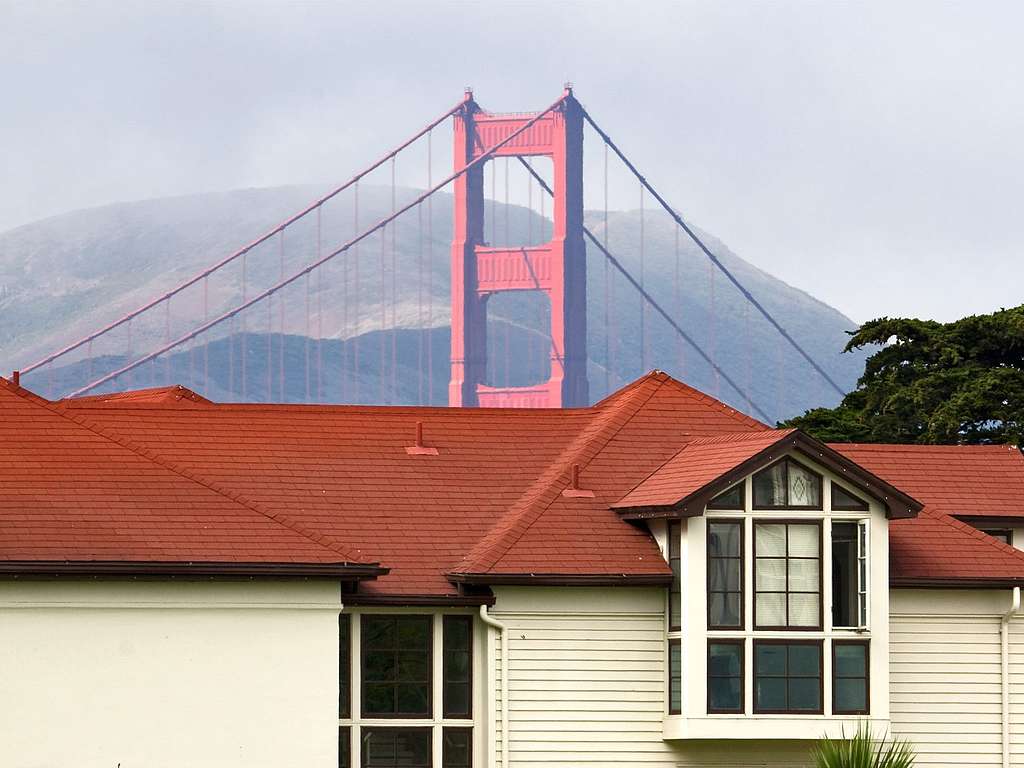 San Francisco’s Presidio is the ultimate success story: a former army base-turned-national park site at the southern foot of the Golden Gate Bridge. Brimming with hiking trails, beaches, restaurants, and museums, it’s one of the city’s most unique treasures. As a local, it’s also one of my favorite spots in the city. Here’s what not-to-miss on your next visit to the Presidio.

The Presidio became a military post in 1776, first for Spain, and then for Mexico before the U.S. seized it for themselves in 1846, at the start of the Mexican-American War. Over the years it played a part in the many military engagements of the Pacific Rim and served as headquarters for the U.S. Army Western Defense Command during World War II. Congress decided to close the still-active army installation in 1989, at which time it was the oldest operating military base in the country.

The U.S. National Park Service acquired the land in 1994, and it’s now a part of the Golden Gate National Recreation Area (GGNRA), 82,116 acres of non-continuous parkland that includes everything from Muir Woods National Monument in nearby Marin County to Alcatraz Island.

A first-of-its-kind, non-profit federal agency called The Presidio Trust oversees the Presidio’s interior and the majority of its 700-plus structures, earning the funds to manage the park through overseeing its businesses, leasing its homes (approximately 4,119 people reside within the Presidio), and providing special permits for such activities as races and outdoor gatherings.

Today, the Presidio is one of San Francisco’s greatest natural and cultural assets, with everything from hiking and cycling trails to a bronze statue of the great Jedi master, Yoda. It’s home to the new 14-acre Tunnel Tops attraction and a museum dedicated to the life and legacy of the “man behind the mouse,” Walt Disney. It’s also one of the best examples of large-scale adaptive reuse around. You’ll see things like a former airplane hangar converted into a trampoline park, and a once-barracks transformed into a historic boutique hotel.

What to do in San Francisco’s Presidio

Whether it’s a game of bowling at the 12-lane Presidio Bowl (there’s also “Glow in the Dark” bowling Friday and Saturday nights) in the park’s Main Post, or taking a spin on the trampolines at the House of Air, the Presidio offers a wealth of activities and attractions for everyone.

Play a round of golf at the 18-hole Presidio Golf Course, a more-than-century-old, 6,500-yard course once reserved for elite players like former U.S. president Teddy Roosevelt and former pro-golfer Arnold Palmer. Or take a stroll through San Francisco National Cemetery. Not only is it the oldest national cemetery on the West Coast, but it’s also one of only four remaining cemeteries that officially exist within San Francisco city limits.

Start off your Presidio excursion at the newly opened Visitor Center in Presidio’s Main Post, the heart of the former military base. Along with information pertaining to the park, including exhibits on its history, there’s a model of the Presidio with its own interactive touch screen that highlights the park’s must-see stops and attractions.

Another resident of the Main Post is the Presidio’s Walt Disney Family Museum, a 40,000-square-foot space telling the story of Walt Disney through 10 permanent galleries ranging from “The Early Beginnings” to “Disneyland and Beyond,” temporary exhibits like “The Jungle Book: Making a Masterpiece,” and displays that include a 12-foot diameter model of Disneyland and Disney’s plethora of Oscars, including a specially made Oscar for his work on the film, “Snow White and the Seven Dwarves.”

Although he traditionally resides on the swamp-covered planet of Dagobah, the legendary Jedi master Yoda also lives on in San Francisco’s Presidio. You’ll find his “life-sized” bronze figure perched atop a fountain in front of Building B, which is part of the 23-acre Letterman Digital Arts Center. This is the city headquarters for Lucasfilm LTD, as well as LucasArts and the motion picture visual effects company Industrial Light and Magic. While the center is a working campus, thousands of Star Wars fans flock to the fountain annually to pay homage to the Grand Master himself. Don’t miss out!

Local tip: The lobby of Building B is open to the public during weekday work hours and is filled with Star Wars memorabilia, including life-sized models of Boba Fett, Darth Vadar, and a Stormtrooper. Stop in, browse, and take as many pics as you like.

The Presidio is also home to four site-specific sculptures by British artist and environmentalist Andy Goldsworthy. The most prominent is Spire, a sculpture consisting of 37 large Monterey cypress trunks — all felled onsite and fastened together to create a towering 100-foot-tall piece in the middle of the Presidio forest. It’s easily accessible on foot via the park’s portion of the Bay Area Ridge Trail.

His other pieces include the squiggly Wood Line in the park’s eucalyptus grove and Earth Wall (a shout-out to the park’s ongoing archaeological digs) inside the Presidio Officers Club.

The Presidio’s home to 24 miles of trails for hiking and/or bicycling, as well as 25 miles of bikeways. One of its most scenic pathways is the Land’s End Coastal Trail, a pedestrian-only 4.4-mile coastal trail that runs from the parking lot above the Sutro Bath ruins (another part of the GGNRA, southwest of the Presidio) to the Golden Gate Bridge.

Along the way, the trail skirts clifftops, meanders beneath cypress and eucalyptus canopies, and provides access to sandy stretches down below. These include Mile Rock Beach, a secluded cove brimming with rocky pools of marine life, and the hugely popular Baker Beach, stretching for a mile below the Presidio’s cliffs. Along with spectacular views of the Golden Gate Bridge and the Marin Headlands, the beach also has a clothing-optional section on its northernmost end.

The Presidio’s newest attraction is its Tunnel Tops, a free 14-acre parkland atop two tunnel portions of Doyle Drive. It features everything from a campfire circle with ranger talks to a cliff walk sporting benches carved from felled Presidio trees. The Outpost playground, equipped with play structures made from boulders and fallen tree trunks, is a kid favorite.

Where to eat in San Francisco’s Presidio

The Presidio offers plenty of places to whet your appetite and quench your thirst, whether it’s pairing Wagyu steak tartare with barrel-aged cocktails at the Presidio Social Club, a casual old-school restaurant housed inside a refurbished army barrack, or sampling craft brews alongside sustainably sourced, shareable plates in the modern and industrial Sessions at the Presidio gastropub.

Located within the Presidio Officers’ Club, which once served as living quarters for both Spanish and Mexican soldiers, Colibri Mexican Bistro serves up authentic Mexican dishes (think mole poblano and chile relleno) and specialty tequila cocktails, while Cafe RX offers a counter selection of coffee, salads, and sandwiches weekday mornings and early afternoons.

Thing to do near the Presidio

Located at the southern foot of the Golden Gate Bridge and along San Francisco Bay, the Presidio occupies the city’s northernmost point. To its east is the Marina district and, just south of it, Cow Hollow. Both are filled with Art Deco-style structures built largely in the 1920s and ‘30s, and are home to ample restaurants and shopping, especially along streets like Chestnut and Union.

On the east end of the Marina is the Fort Mason Center for Arts & Culture (aka Fort Mason), a 13-acre stretch of renovated military structures that house nearly two-dozen nonprofit and arts organizations, including BATS Improv and the Magic Theatre, as well as cafes and restaurants such as Equator Coffees Cafe and Radhaus, a modern Bavarian beer hall.

Southwest of the Presidio is the Legion of Honor, a prominent San Francisco art museum showcasing European works like Renoirs, Monets, Rembrandts, and more.

How to get to the Presidio

The PresidiGo Downtown Shuttle offers free roundtrip service to the general public on weekdays (outside of main commuting hours), beginning from downtown San Francisco’s Transbay Terminal and Embarcadero BART. There are no other city stops outside the Presidio.

SF Muni buses that go directly to the Presidio include the Muni 30 bus (which serves Union Square and Chinatown) and the Muni 43 bus, accessible via neighborhoods like the Haight-Ashbury and San Francisco City College.

Another great way to get around the Presidio is via bicycle, though be prepared for steep hills!

Whether it’s military history, adaptive reuse, cultural attractions, or the great outdoors, San Francisco’s Presidio has a little something for everyone. As any SF local can tell you, it’s one of the city’s top gems. A trip here should be a must on every traveler’s list.

6 Outdoor Adventures Near San Francisco to Escape the Crowds

The weather in San Francisco has a certain reputation. Even Mark Twain acknowledged our summertime temps can be a chilly letdown. Sure, there’s…

A Neighborhood Guide to the Tenderloin in SF

It may not have the best reputation, but San Francisco’s downtown Tenderloin district is home to a bevy of noteworthy attractions and a…

San Francisco’s Chinatown is one of the city’s most quintessential attractions — a neighborhood filled with unique architecture, delicious dim sum joints, and…