A Neighborhood Guide to the Tenderloin in SF

It may not have the best reputation, but San Francisco’s downtown Tenderloin district is home to a bevy of noteworthy attractions and a hub of local history. Whether you’re chowing down on banh mi sandwiches in the two-block stretch of Little Saigon or joining in the Sunday chorus of Glide Memorial, you’ll find the real San Francisco in this often gritty, always intriguing neighborhood.

As a long-time local, I’m here to show you the best of what SF’s Tenderloin has to offer.

A brief background of the Tenderloin

Located in downtown San Francisco between Union Square to the northeast and Nob Hill to the north, the Tenderloin butts up against some of the city’s most tourist-friendly neighborhoods. Despite the close proximity to tourist hotspots, this 50-or-so-square block district doesn’t always feel so welcoming itself. That’s because homelessess, drugs, and crime run pretty rampant here. But if you look past its rough edges, you’ll also find a community rich with theaters, LGTQB+ history, and artists leaving their marks.

This largely working-class neighborhood has been a part of San Francisco lore since right after the 1849 Gold Rush. Though restaurants, hotels, and brothels were a part of the Tenderloin’s fabric before the 19th century, it wasn’t until after the earthquake and fire of 1906 that the district as we now know it came into being. These devastating events took a toll on the Tenderloin, essentially destroying it. However, San Francisco quickly rebuilt. The district soon filled with gambling halls, boxing gyms, and speakeasies — as well as theaters, the same kinds that still draw visitors today — making the neighborhood quite prosperous into the 1950s.

Despite its new wealth, the Tenderloin kept its seedy underbelly. By the 1930s, the name “Tenderloin” was a generic term for an area known for crime and corruption. While there are many theories of how this term came into being, most people believe that it was a police captain, Alexander S. Williams, who first coined the moniker while referring to an area corrupt with vice in New York City. “I’ve been having chuck steak ever since I’ve been on the force,” said Williams, “and now [with these increased bribes] I’m going to have a bit of tenderloin.” For many years it seemed every major U.S. city had a nefarious area known as the Tenderloin. San Francisco’s is the last to retain the name.

Over the years, the district has been home to some famous residents, including Dashiell Hammett, who penned hard-boiled detective novels — like The Maltese Falcon — from his studio at 891 Post Street. It’s the same address that he gave to the book’s main character, Sam Spade. Famed jazz musicians like Miles Davis and Thelonious Monk also lived in buildings in the Tenderloin and also performed in its clubs.

In 1966, the Tenderloin became site of the Compton’s Cafeteria Riot, where a cop grabbed and tried to arrest a transgender woman. The event marked the beginning of transgender activism in the city. By the 1970s, the neighborhood became a major refuge for immigrants from Southeast Asia, including Laos and Vietnam. This created what a local police officer termed “vertical villages,” a handful of immigrants packing into one studio apartment at a time to make ends meet.

While the neighborhood has always resisted gentrification, it has allowed smaller “pocket districts” to thrive. This include Little Saigon along Larkin Street, San Francisco’s overlapping Theatre District, and the Transgender Cultural District — the first legally recognized transgender district in the world.

Today, San Francisco’s Tenderloin has one of the city’s highest densities of affordable housing, including single-room-occupancies (SROs), studios, and one-bedroom apartments. Many of them are located in the neighborhood’s Uptown Tenderloin Historic District, which became a part of the National Registry of Historic Places in 2008.

Along with its many architectural wonders, the Tenderloin is home to an incredible art scene and acts as a hub for social services, including the Tenderloin Housing Clinic—providing permanent housing to formerly homeless single adults — and Raphael House, the city’s largest family homeless shelter. Despite its unfavorable reputation, the Tenderloin has plenty of great offerings that are well worth exploring.

What to do in San Francisco’s Tenderloin district

From browsing art to catching a show, there are many ways to experience this underrated neighborhood.

The Tenderloin is home to a continuously evolving art scene. Prominent examples include murals — like Erlin Geffrard’s massive depiction of working class people — that decorate the sides of residences, storefronts, and office buildings. The redwood trees of Tenderloin National Forest, an unofficial San Francisco park that overtakes Cohen Alley with floral and community artworks, are also worth a look.
There are spaces like Book & Job, dedicated to showcasing the works of new and established artists, and The Luggage Store (they don’t sell luggage), which hosts rotating art exhibitions as well as creative music like improvisational jazz. The Luggage Store website also provides detailed info on the district’s many murals and where to find them.

San Francisco’s Theatre District overlaps with the Tenderloin, making the neighborhood one of the best in the city for catching a touring live show or musical. You’ll find both at places like the Golden Gate Theatre and the Curran Theater. Indie entertainment (think local stage productions, modern dance and sketch comedy) is the norm at spots like PianoFight, CounterPulse, and the EXIT Theatre.

Known both for its live shows, like Misfit Cabaret, and for its art gallery, the Tenderloin’s Alcazar Theatre is also a stunning example of Exotic Revival architecture. The building was originally constructed as a Shriner temple in 1917 and features alcoves, arches, and geometrical moldings that make it look like an Islamic temple.

First opened in 1930, GLIDE Memorial Church is today one of the most liberal churches in the country. This is largely due to its former pastor, Rev. Cecil Williams, who served from 1963 until 1999.

But the church’s Sunday Celebrations is where everyone, from practicing Christains to agnostics, get into the act. Its musical performances are legendary, featuring the approximately 100-member Glide Ensemble, complete with its own house band. Singing, swaying, and clapping along are encouraged and expected. Just be sure to arrive early to secure a seat.

Delve into the neighborhood’s rich, complicated, and insightful history at the Tenderloin Museum.

This is the place to learn about places like the legendary Black Hawk Club, where iconic jazz singers and musicians, such as Billie Holiday and Charlie Parker, often performed.

You can also learn about Wally Heider Studios, the recording site of albums such as The Grateful Dead’s American Beauty and Creedence Clearwater Revival’s Bad Moon Rising. In addition to exhibits, the museum hosts events ranging from film screenings to poetry nights.

Another place to learn about neighborhood history is from the Tenderloin’s many landmark plaques decorating its sidewalks and buildings. Along with at least 100 structures sporting historic markers, they are also sidewalk plaques documenting some of the district’s most significant lost history. One such spot is the site of the first Original Joe’s — an iconic SF eatery — and site of the Compton’s Cafeteria Riot.

In addition, the Tenderloin is home to about a third of the city’s historic neon, like the blinking martini glass hanging outside of Geary Street’s HA-RA Club.

Inventive (and exciting!) culinary and drink offerings are alive and well in the Tenderloin. These include La Cocina Municipal Marketplace, an all-women food hall that’s grounded in opportunity and affordable meals. Dine on cumin chicken sandwiches at Kayma Algerian Eatery, pupusas at Estrellita’s Snacks, or opt for Seneglease peanut stew at Teranga.

The marketplace’s La Paloma serves up beers, wines, and spirits to accompany whatever meal you choose. Other popular restaurants include Brenda’s, known for its French soul food, and Saigon Sandwich, a tiny Larkin Street shop in Little Saigon that serves up some of the best banh mi sandwiches in town.

If you’re after a drink, favorites run the gamut from Aunt Charlie’s Lounge, the neighborhood’s last queer bar, to Zombie Village Tiki Bar, which has a selection of unique cocktails that celebrate both the South Pacific and the Carribean alike. For North America’s largest selection of gin in a Victorian-themed venue, don’t miss Whitechapel. For another hotspot, check out Black Cat Supper Club, which offers artisanal foods, craft spirits, and live jazz all in one.

One of the neighborhood’s swankiest spots is Bourbon & Branch, a 1920s speakeasy-style bar that requires reservations and a password to enter. House rules forbid photos and the use of cellphones. Its adjacent (and aptly named) Library bar allows walk-ins. Just use the  password “books.”

North of the neighborhood is Nob Hill, home to Top of the Mark, a 19th floor landmark and bar that boasts extraordinary views of the city.

Explore the highlights of San Francisco

San Francisco in a Day Tour

How to Get to San Francisco’s Tenderloin

In the heart of downtown, the Tenderloin is easily reachable via both MUNI’s market street buses and trains, and BART. Depending on where in the neighborhood you want to go, you can disembark at either the Civic Center or Powell Street Stations and then walk northeast or northwest accordingly.

Buses such as the Fulton 5 and the Geary 33 also access the district.

Reputation aside, don’t be afraid to experience the Tenderloin’s many good qualities, from its craft cocktail bars to its incredible history.

Want to discover more cool neighborhoods in SF? Read about everything to do in Chinatown, from exploring its alleyways to indulging in dim sum. 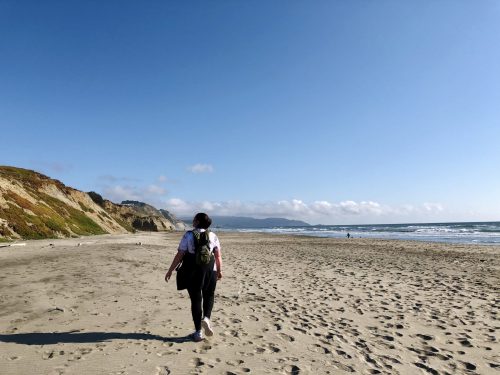 6 Outdoor Adventures Near San Francisco to Escape the Crowds

The weather in San Francisco has a certain reputation. Even Mark Twain acknowledged our summertime temps can be a chilly letdown. Sure, there’s… 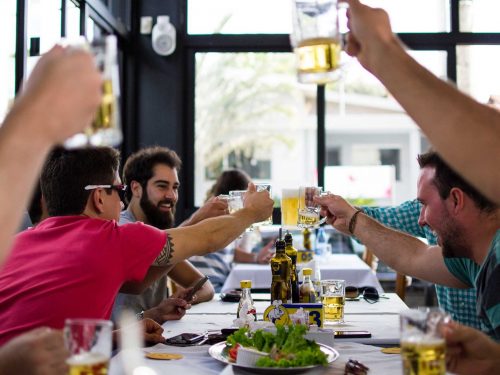 4 Vegan/Vegetarian Restaurants in San Francisco You Have to Try

San Francisco is known for its diverse array of food, from fresh Dungeness crab to delicious bay shrimp. But, you don’t need to…

Among the many neighborhoods in San Francisco, The Castro is one of the most famous. You’ll find it in Eureka Valley, overlooked by…