A Room-by-Room Guide to the Paris Catacombs for Tourists 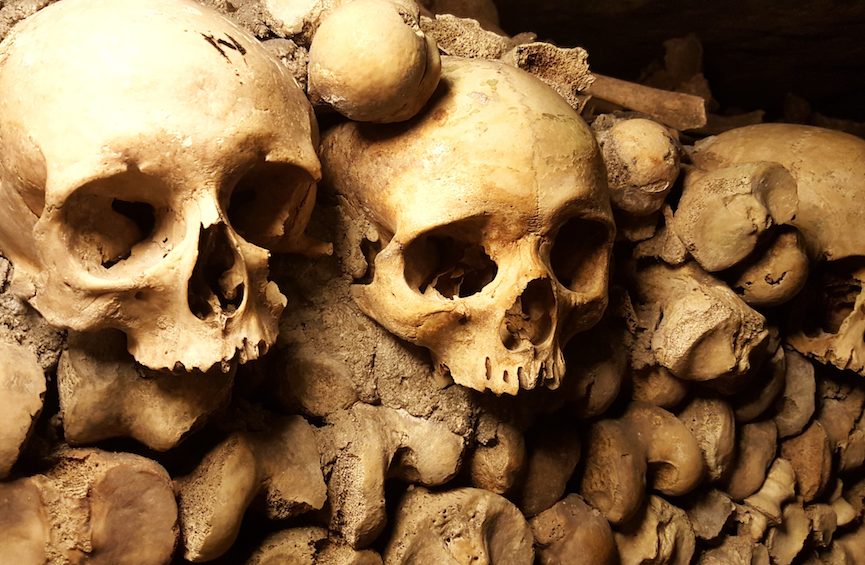 Paris is one of the great medieval cities of Europe. Like Rome, it has vast underlying passageways and quarries, called catacombs. This labyrinth of tunnels is thought to cover around 800 hectares — that’s nearly 2,000 acres — beneath the city, though only a small part is explored and open to the public. Years ago, the government sectioned off a safe, small part of the 200 miles of passages for visitors to explore. The Paris Catacombs attract visitors from around the world, inviting them to experience the dark side of the beautiful City of Light.

This tourist attraction, formally called the Denfert-Rochereau Ossuary or, more commonly, the Paris Catacombs, is a great experience anyone seeking an unusual experience, but it’s a must on your tour of Paris. Here’s what you’ll discover when you visit the Paris Catacombs.

As you might expect, there’s a lot of buried history here.

The Catacombs weren’t always a global attraction, though they first opened to the public (by appointment) back in 1809. Before the French Revolution, the Catacombs were used for burial grounds to limit the spread of disease that arose from overcrowded cemeteries in the 1700s. The city’s solution? Move the remains underground — far underground.

Then during the French Revolution, guillotine victims and others were buried directly here, including notable leaders such as Robespierre, Lavoisier and Danton who were beheaded in 1794. Remains of around 6 million Parisians lay buried in the underground tunnels, many of their names lost to time.

Originally the Paris Catacombs site was known as the Paris Municipal Ossuary, but it was renamed, thanks to the fascination with the discovery of the Roman catacombs.

Here’s what you can see in each section of the Paris Catacombs.

During my trip to Paris in 2018, I bought skip-the-line tickets for €30 to descend into the darkest part of the city. I was so excited because I’d heard of the walls stacked high with human skulls. I wasn’t expecting the many reservoirs, crypts, and vaults, let alone the immersive feeling of experiencing history.

Here is a room-by-room guide to the various sections of the underground chambers (and stairways and corridors) of the Paris Catacombs, so you can get an idea of what you’ll see in each part of the exhibit.

A Stairwell to the Depths of Paris

The first part of the experience is unlike anything you’ve done before. It’s a spiral staircase descending into the earth, with triangular steps and walls that seem to get slightly more moist the farther down you go. Think of it like climbing a tower — just going the opposite direction. And yes, there’s a railing to hold on to each step of the way.

Once you’re finally finished with the stairs, you navigate a few narrow corridors with the group of visitors you were let in with. Don’t worry — you’re never alone down here.

Entering the First Section of the Catacombs 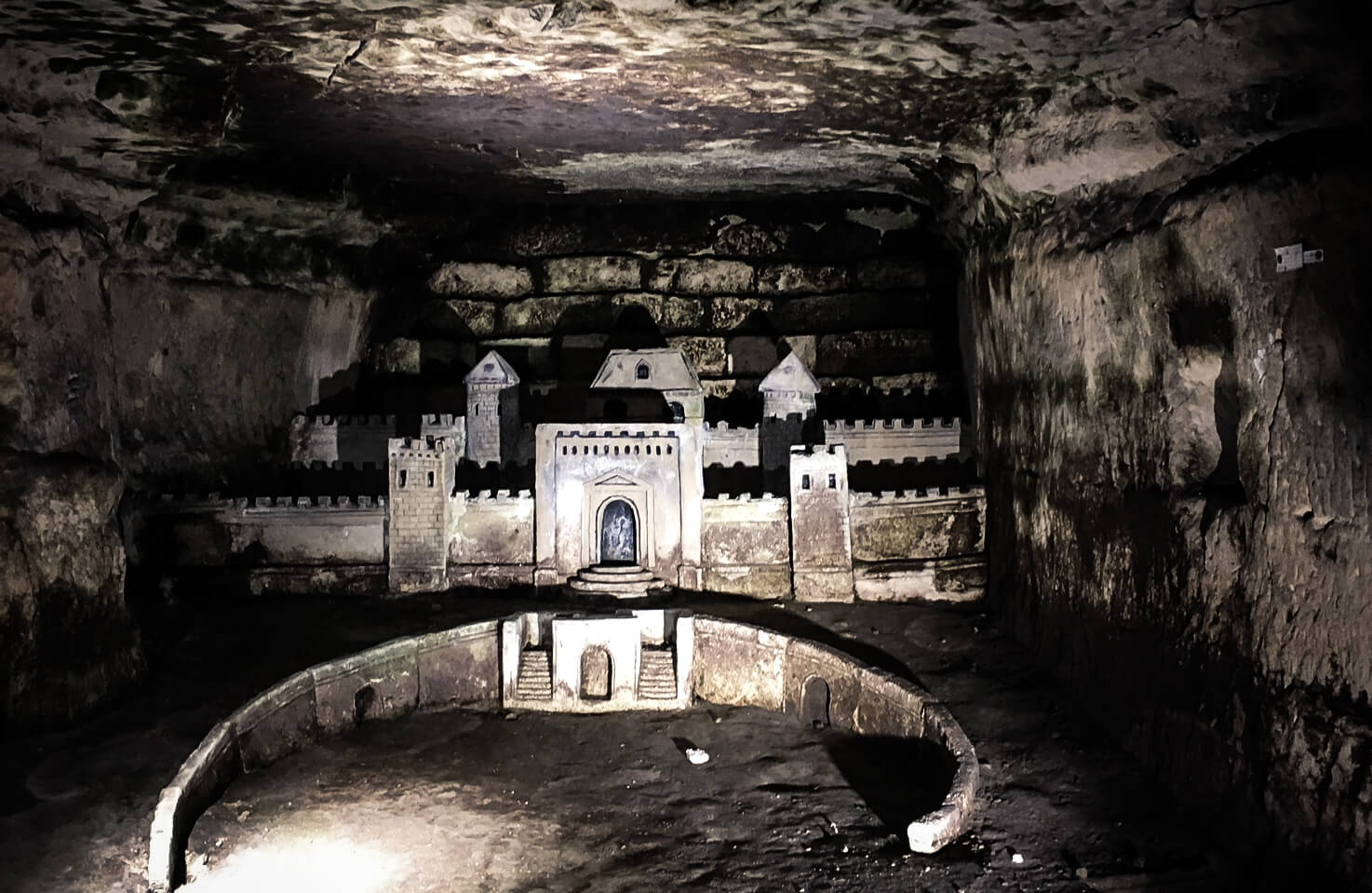 The walls and the ground feel like a cave. It’s hard to believe you’re still in Paris, one of the most luxurious capitals in the world.

The first part of the Catacombs acts as an exhibition explaining a bit of the history with images on the walls and complementing text panels translated in various languages. From here, you will navigate through a few more tunnels with varying ceiling height — so tall visitors should watch their heads!

On the walls, you will see markings from when the Catacombs were used as quarries. These markings were helpful so workers would get lost on their way through the tunnels. No need to worry about getting lost now though, as there are security guards and gates to usher you properly through the right corridors.

In this section of the Catacombs, there are no bones yet. That exciting part of the journey will come soon.

Next, you will go through the Port-Mahon corridor, which displays magnificent sculptures erected by a French quarryman, named François Décure.

After you enter, you will be face to face with Décure’s beautiful replica of the fortress of Port Mahon of Minorca. He sculpted it by memory, as he was once imprisoned there. The art piece is known as the Beauséjour sculpture.

After the Port-Mahon corridor, you will find a part of the Catacombs that resembles a wishing well. This is the “Quarryman’s Footpath,” originally used by quarrymen working in the Catacombs to get access to water for mixing cement and to clean themselves before returning to ground level after work.

Once you’ve gone through this first section of the Catacombs, you’re finally in one of the larger rooms full of arrangements of skulls. Intermixed are plaques, tombs, and altars that commemorate the dead.

You will know you’ve made it to the Ossuary when you stop at a plaque that says in French, “Stop — this is the empire of death.”

I remember feeling so spooked at the sight of all these skulls, piled tall and wide. I was overwhelmed with the idea that these bones were part of history and, at one point, connected with real Parisians with their own lives and secret histories. This section, called the Ossuary, is definitely my favorite part. If you’re here to see skeletons and disassembled bones, this place delivers.

In this room, you’ll also see a lamp that used to be lit with oil to signal that there was oxygen in the air and that it was safe for workers in the quarries to continue. When this “sepulchral lamp” was no longer lit, the workers had to exit the Catacombs, as there was no oxygen. This isn’t an issue for the current attraction, thanks to plenty of air vents.

Other sites you’ll find in the Ossuary include the Fountain of the Samaritan, a spring, and Gilbert’s tomb, featuring a poetic verse in French. The part of the Ossuary that struck me the most, though, was the barrel-shaped column of ankle bones and skulls — the Crypt of Passions.

Remember the daunting stairwell down to the underground world of Paris at the beginning of your visit? Well, lucky for you, all the narrow corridors and sections of the Catacombs were leading you (slightly) closer to the surface the entire time.

So for your final return from the dark, you will only need to climb 112 steps, a bit faster than your descent.

And this is Paris, so of course, you exit through the gift shop! 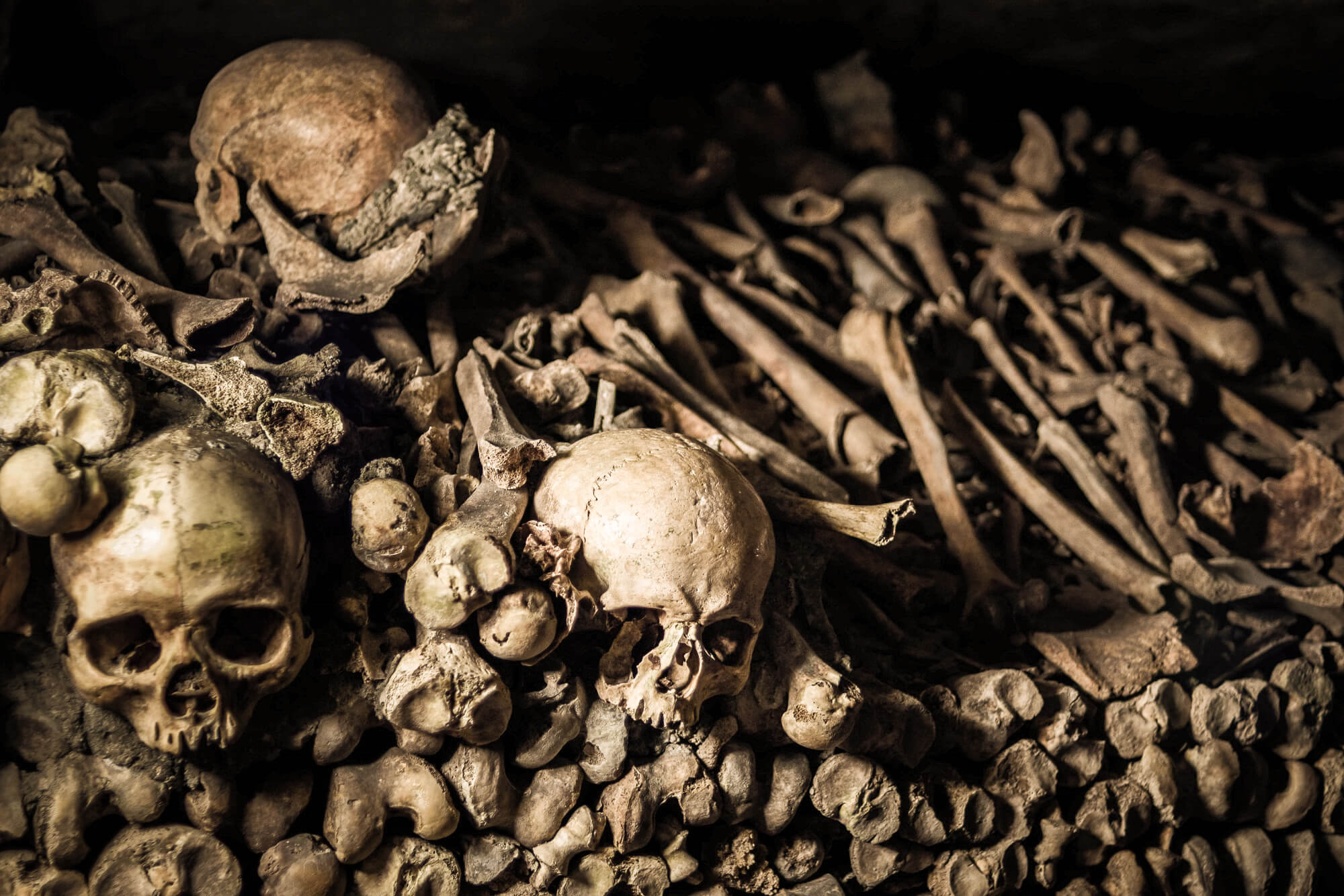 The Paris Catacombs are better when you go with the right company. They’re popular with visitors, so of course, you can go on on your own, but visiting with a group makes it that much more fun. Bring your friends and family for a special bonding experience. After all, it’s still the City of Love, even if you’re underground.

A professional guide helps make this subterranean tour even better. I highly recommend opting for a guided tour of the Paris Catacombs to help you make sense of everything you’ll see while you’re down there. I visited without a tour, and yes, it was immersive, but I missed out on a lot of the history and lesser-known stories. And there was a lot of guessing about what something meant or why it was there.

A few workers are scattered around the various rooms in the Catacombs, somewhat like docents in a museum. However, their main job is to keep the bones safe, so you won’t really be able to ask them all your questions. There’s just too much down here to discover.

Here’s how to get special access to areas off-limits to the general public.

With a tour guide, you can get VIP access to deeper sections in the Catacombs that are off-limits to the general public because of too much potential destruction. One part that you get to see with our tour guide is the Church of the Innocent, the oldest part of the Catacombs containing the most ancient bones.

Note: Some of the earlier mentioned attractions mentioned above are restricted to tour-access only, which means you will have to visit under the leadership of a tour guide. These include the Beauséjour sculpture and Quarryman’s Footpath, which has a bath that is too deep in elevation to reach even with a tour group, but you can view it sealed off from a distance. These attractions have already suffered some damage from the masses who have visited before, which is why there are strict rules for preservation to respect and can only be viewed by tours accompanied with a professional guide.

Answers to Your Paris Catacombs FAQs

Here are answers to some of the questions we get asked most about visiting the Paris Catacombs, but if you have others, hit us up on Facebook or Instagram. We love hearing from fellow travelers!

How expensive are tickets?

Prices for base-level tickets typically range from €5 for a child’s ticket without an audio guide to €29 for an adult’s ticket with an audio guide. However, these tickets don’t include a guided tour. Prices for guided tours can vary, but many have admission to the Catacombs as part of the package, so make sure you check before booking your tickets.

How long is the line to get in?

The line can get long, sometimes wrapping around the building and lasting for hours. I recommend getting there early and avoiding peak hours, especially during summer.

If you choose a guided tour, make sure they offer a skip-the-line option. You want to make the most of your time while you’re here, and avoiding the hassle of the line is a huge plus for busy tourists.

Is the attraction too scary for young children?

This isn’t a haunted house. The attraction is dimly lit, though, so kids who are afraid of the dark might not enjoy this one. Something else to consider, if you have any family members prone to claustrophobia, there are some parts of the site they may be uncomfortable, such as the stairs going down

How far down are the Paris Catacombs?

The Catacombs are about 65 feet deep, roughly the height of a five-story building if you turned it upside down. It takes 131 steps to get to the bottom of the Catacombs, so wear your walking shoes.

Looking for extra tips before going?

Here’s one more: Wear layers so you’re warm and can add or remove them as needed. The average temperature of the underground site is around 57 degrees Fahrenheit.

The Catacombs of Paris are a great spot on your Paris itinerary for the whole family. The only rule you have to remember while visiting is to avoid disturbing the site in any way. Don’t take any bones, but do take lots of photos (without flash). I feel confident guaranteeing that this is one of those rare experiences you’ll remember forever.

The first time I strolled through the Marais, it was clear that this was the district that embodied a new-bohemian — and slightly…

Paris is arguably the fashion capital of the world. And for the past 125 years, one particular shopping center (more like shopping experience)…

Experience the Eiffel Tower With Climbing, Dining, and Views

Many say that the Eiffel Tower offers the best views in Paris — and who could really argue? But there is so much…