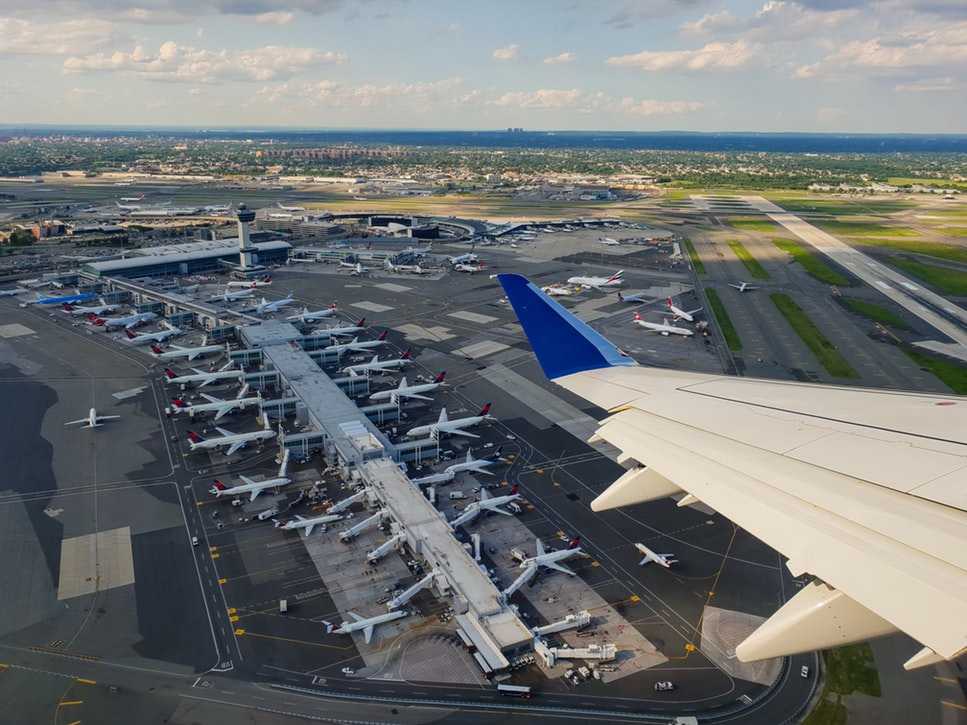 The history of the airport starts from 1948 when it was originally established as New York International Airport (also referred to as Idlewild Airport). To honor the 35th president of the United States, the airport was renamed after the assassination of John F. Kennedy in 1963.

Currently, JFK airport comprises 6 functional passenger terminals, numbered from 1 to 8 but skipping Terminal 3 and Terminal 6 that were demolished in 2013 and 2016, respectively.

Opened in 1962, the Trans World Flight Center (or TWA Flight Center) is one of the former terminals at JFK that is currently operating as a charming hotel. The building features a wing-shaped roof and floor-to-ceiling windows allowing visitors to enjoy the views of departing and landing planes. Due to its eye-catching and futurist exterior design, the former TWA terminal building has been considered as one of the NYC’s landmarks.

As we have already discussed some background details regarding JFK airport and its former terminal, let us continue with some historical aspects and fun facts about the former flight center and current hotel.

In 1955, the idea of building a TWA Terminal was transferred into an actual plan. Eero Saarinen and his crew were assigned to work on planning and designing the TWA Flight Center building. The terminal was completed in 1962 and the construction has been considered as one of the innovative and futurist buildings since then. Even though the terminal was among the first flight centers to include enclosed jetways for passengers, closed-circuit TV, baggage carousels and scales, it was closed in October 2001 due to constant financial difficulties.

Shortly after the closure of the terminal, several ideas were proposed, which implied converting the building into a restaurant or conference center. Moreover, the conversion plan included the alteration of the building exterior by enclosing it with another terminal(s). Since this would have made the mesmerizing building completely invisible, the idea was denied by the members of art society and various architects.

Since then, the former terminal building had been hosting a variety of exhibitions promoting artists from other countries. Due to its unique design representing 20th-century futurist architecture, the TWA Terminal was acknowledged as NYC’s landmark and listed on the National Register of Historic Places (NRHP) by National Park Service (NPS) in 2015.

The history of the flight center continues with the emergence of a new JetBlue Airways Terminal (also known as Terminal 5) through the construction of a new facility which was opened in October 2008. Terminal 5 is connected to the former TWA Terminal building through Eero Saarinen’s alluring flight tubes.

JetBlue and its hotel developer partner proposed a plan to convert the head house of the former TWA Flight Center into an on-airport hotel, which would incorporate the landmark building as its centerpiece. Later that year, it was confirmed that the former terminal building would be converted into the TWA Hotel.

From Terminal to an On-Site Hotel

As mentioned earlier, the plan to convert the terminal into a hotel for JFK passengers was confirmed by the officials, and the construction of the TWA Hotel began in late 2016. Reborn in May 2019, the luxury hotel complex comprises 512 guestrooms, covers 50,000ft2 of meeting and event space, and 10,000ft2 of a fitness center. Along with that, the hotel territory includes the Paris Café, the Sunken Lounge, a cocktail lounge, Food Hall, a rooftop infinity pool, an observation deck, a twister room, a photo room and a classic Solari message board.

What makes the hotel even more unique is that the design of the former flight center created by Eero Saarinen is preserved through the careful redevelopment of the building. Restoration of the building was and performed extremely accurately not to lose the original appearance and 20th-century features.

Regarding the interior of the lobby area, almost everything is exactly the same as in the original flight center except for ticket check-in for passengers that was converted to hotel check-in for customers.

There are no square corners in the entire building. Therefore, it has been quite challenging to achieve such complex geometries. The only way to do so was to utilize flexible or very small materials. The Beyer Blinder Belle team decided to use tiny penny tiles that were extremely popular in the 1960s. The use of such material made the building even more historic since it represents some popular patterns from the time it was originally built.

These tiny penny tiles are especially thematic for the Sunken Lounge area. The lounge area seems as if it was sunken in the pool and the small tiles make it even more striking.

With the aim to tell the history of former TWA Flight Center, TWA Hotel comprises various museum exhibits through the partnership with the New-York Historical Society. The museum incorporates clothing items from the 1960s along with other vintage accessories, equipment, handbags, and suitcases. The combination of the colors perfectly suite the hotel interior and make the museum area even more appealing to the visitor’s eye.

The domination of red color not only throughout the lobby territory but also in the hotel hallways makes the interior design very luxurious and unique. The balance of the colors is so accurate that you will find the place very attractive, even if red is not your favorite color. Since the building was constructed in the way that there are no corners, the curved appearance of the hallways makes the hotel even more fascinating.

One of the most appealing areas in the hotel is the 50,000ft2 space for a wide variety of event and meetings. Even though red and brown colors are dominant in the design, the ceiling and some other details are represented in white, which creates an illusion of even larger space.

Along with the tempting interior design of common spaces within the hotel territory, the TWA Hotel is renowned for its luxury guestrooms. The hotel offers 16 different types of rooms featuring distinct views of JFK’s runways or Historic TWA. Although the theme of all guestrooms is somewhat the same, the interior comprises some unique elements which make the hotel even more appealing for the visitors.

Every room is considered ultra-quiet with floor-to-ceiling windows and blackout shades which make the views unbelievably beautiful. Furthermore, each room is equipped with a 50- to 65-inch HDTV, free local and international calls, wireless charger with two USB ports, a mini-refrigerator, and custom bath amenities.

For the guests enjoying a healthy lifestyle, there is a huge 10,000ft2 space for a fitness center that is considered as the largest hotel gym in the world. The center incorporates a cycling studio, 12 treadmills, 10 ellipticals, and a full yoga studio. Customers can hire a personal trainer or join group classes depending on their preferences. Moreover, the gym is characterized by extra large lockers and changing rooms equipped with all necessary supplies.

Last but not least, the hotel territory comprises a heated rooftop infinity pool that is accessible for the visitors all year round. There is an opportunity to close the pool and observation deck and host a private event at the pool. Along with that, a winter-themed getaway – the Runway Chalet at the pool bar – is a vintage spot serving cocktails that creates a warmer atmosphere with a thematic fireplace. Therefore, this is a perfect spot for TWA Hotel visitors to relax and spend some time with colleagues, friends, or families.