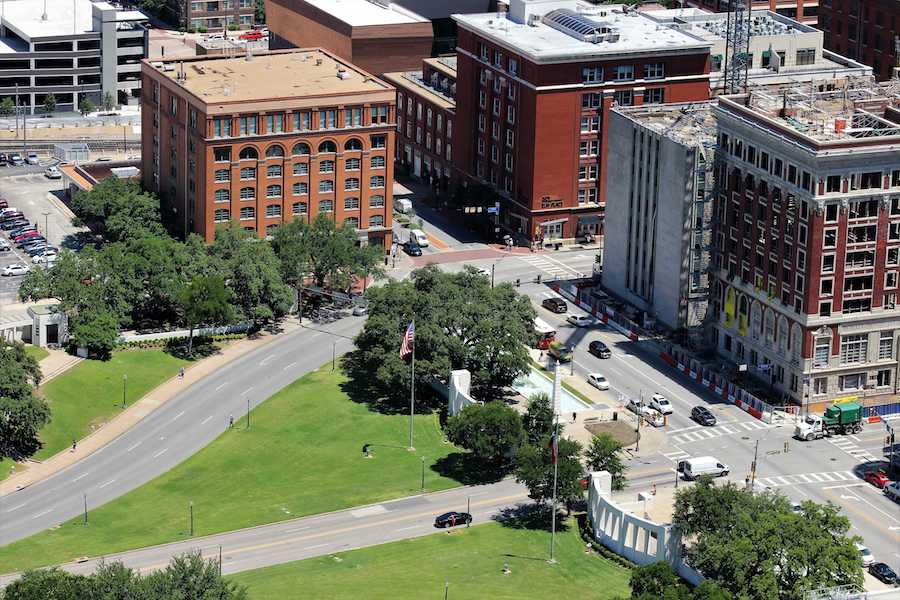 The Dealey Plaza National Historic Landmark District in Dallas might be most associated with the JFK assassination, but there’s a lot more history here than what happened in 1963. It’s also the city’s only national historic district and one of only five such districts in the state.

Located just a few blocks from downtown and easily walkable, the district is a great addition to your Dallas city tour. In this article, I’ll share why it’s called Dealey Plaza, perfect spots for a photo opportunity, and why it is the most visited heritage site in Dallas.

A Little Texas History: How the Front Door of Dallas Got Started

Built in 1890, Dealey Plaza was the western gateway to downtown, often called the “birthplace of Dallas” or “the front door of Dallas.” But Dealey Plaza’s roots go back even further to the 1840s. That’s when John Neely Bryan picked the best spot along the Trinity River for a trading post. It eventually became a town charter. And by 1872, Dallas had one of the first railroad crossings in the country.

Nearly a century later, President John F Kennedy was assassinated from within yards of the very spot of this former trading post. Another 30 years later, Dealey Plaza became a national historic landmark district to preserve the buildings, structures, and streets associated with these events.

There's more here than JFK history here. Join us for Halloween as we explore the murders and mysteries associated with Dealey Plaza with a pop-up event designed especially for locals. It's safe, socially distanced outdoor fun — but come prepared to be shocked!
Get event info

Today, Dealey Plaza is a popular tourist attraction for travelers exploring Dallas. There are quite a few buildings and sites included in the district, but it’s not too large, making it a perfect fit for a walking tour.

Here’s a quick look at some of the places you can visit in the district.

First up is the Texas School Book Depository. Now the Sixth Floor Museum, this building is the most famous spot on the plaza, so you can’t miss it. The warehouse-looking building is where Lee Harvey Oswald fired those fateful shots in 1963.

The Union Terminal Company Interlocking Tower is the rail yard for the Texas School Book Depository. It is painted stucco white, so it will certainly stand out.

The Dal-Tex Building and Annex is located directly across the street from the Sixth Floor Museum. The name, Dal-Tex, is short for “Dallas Textile” — a textile company occupied the building in the 1960s during JFK’s visit.  Some conspiracy theorists believe that the fourth floor of this building served as another firing position during the assassination.

When you visit, you’ll notice a new addition to the Records Building roof, sticking up from the large cube that makes up the original structure. But it’s been carefully restored over the years so it appears largely the way it did back in 1928. The annex is similar, with the right side of the building (as you face it from the reflecting pool) less built up, but the building as a whole carefully restored. Both of these buildings are still in use today.

Across from the Old Red Museum, on the other side of South Houston Street, you’ll find two shallow reflecting pools. The long pools are divided by Main Street with an obelisk on one side and a statue of George Dealey (more on him below) on the other. A bronze plaque near the obelisk details the events of Nov. 22, 1963, when Kennedy was shot during a presidential parade and later died at Parkland Hospital.

There are a few trees here so you might be able to escape the Dallas sun for a bit, but this park is less a place for picnicking and more a spot for quiet reflection and some beauty in the urban landscape.

Near the courthouse and the reflecting pools is a recreation of Bryan’s original log cabin, built in the early 1840s, that once stood here. The one-room structure pays homage to the man who founded the area, and there’s a plaque so you can learn more about Bryan and his former home.

Next up, you’ll see the United States Post Office Terminal Annex. It was built in the 1930s, pretty impressive if you recall that’s around the time of the Great Depression when money was tight.

The building is plain from the outside — essentially a large square block made from brick, granite, and limestone — but don’t let that fool you. It conceals two lovely murals in the lobby. However, the inside isn’t open to the public, so you’ll need to use your imagination or check out this blog post.

Finally, you’ll come upon the stunning Kennedy Memorial. As the video above shows, this isn’t your average memorial.

The memorial was designed as a cenotaph, or open tomb, and symbolizes the freedom of John F. Kennedy’s spirit. It’s roofless and over 30 feet high with walls of 72 white concrete columns that almost seem to float. It’s a must if you visit Dealey Plaza.

Where to Take Photos in Dealey Plaza

Since I just mentioned the Kennedy Memorial, I think it’s the perfect place to sit and reflect on what has happened here and definitely to snap a photo to remember it.

The infamous “grassy knoll” is another spot to photograph, even if you’re not a JFK assassination conspiracy follower. It’s on Elm Street, a small, sloping hill just inside the plaza, not far from the “X” marks in the street and the Sixth Floor Museum. By the way, if you’re wondering what those “X” marks in the middle of Elm Street represent, they’re the two places bullets were fired during the JFK assassination.

The best JFK-related photos here, though, are in (or from) the Sixth Floor Museum. You can look out from the sixth-floor window as Lee Harvey Oswald did and see the street below where the presidential cavalcade passed through.

The log cabin, even though it’s not original, is another great photo spot since it’s so different from the surrounding buildings — and not at all what you’d expect to find in the middle of the big city.

For something a bit more scenic, try in front of the reflecting pool with the Old Red Museum in the background. This spot perfectly captures the beauty of today mixed with the history of yesterday.

Dealey Plaza: FAQs for Your Visit to Dallas’s Only National Historic District

Where can you eat near Dealey Plaza?

If you get hungry, I recommend grabbing a bite at Tutta’s Pizza, a funky spot in the west end of the historic district. They serve delicious pizza, sandwiches, salads, and wings. Or if you feel like a bit more of a splurge, try Ellen’s. Their nonstop brunch, served from opening to closing time, is legendary.

If you want a sampling of a few places, including Tutta’s, while learning more about the local food and culture scene, try a Dallas food tour. Warning: Please come hungry!

Why is it called Dealey Plaza?

The plaza is named after George Bannerman Dealey, a civic leader and early publisher of “The Dallas Morning News.” He’s remembered because he wanted to clean up Dallas — even going so far as to place trash cans around the plaza. He also hired a city planner, and pushed for reform near the plaza.

Reminder: You can see his statue near the reflecting pools along South Houston Street.

Can you visit Dealey Plaza and downtown on the same trip?

Dealey Plaza is in the West End area of Dallas, but it’s only a few blocks down Main Street to get to the heart of downtown Dallas. The famous Giant Eyeball art piece, for example, is only a half mile away, and you can get to another popular downtown attraction, Thanks-Giving Square, with just a 15-minute walk.

Since it’s so close to downtown and such a central part of Dallas history, Dealey Plaza is definitely worth a visit. There are informational plaques and even a map at various spots around the plaza, making a walking tour here a natural choice. Visit Dealey Plaza with a local and you’ll get the full history of the plaza and its many landmarks, then and now.

The star of Dallas’s only national historic district is certainly the Sixth Floor Museum, but even if you don’t have time to visit the museum, there’s a lot to discover outdoors. From the x-marks-the-spot locations on Elm Street to an 1840s-style log cabin to the statue of the man who started it all, Dealey himself, there’s a wealth of history to unpack.

If you want the history to really come alive, it helps to do a little research beforehand, join a guided Dallas city tour, or stop by the Sixth Floor Museum. Otherwise, just bring your camera — and please, your sunscreen (it’s Texas, y’all) — and enjoy an hour or two exploring.