Top Five Foods you have to Try when Visiting Paris! 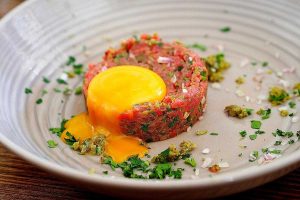 French onion soup, or Soupe à L’oignon is such a great starter, its cheesy, crispy, warm, and delicious, what’s not to love! It is also a very traditional dish that dates back to the 18th century… Fancy!

One of the best parts about traveling to a foreign city is trying the local delicacies and OH MY GOSH, Steak Tartare is the BEST! If you are turned off by the idea of eating raw beef, don’t be. The combination of flavors, spices, and herbs makes this an absolutely mouthwatering dish! 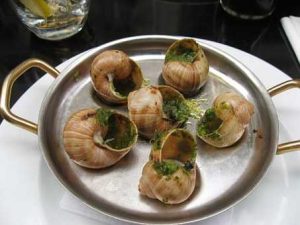 I know… Snails! But one of the most amazing things about the French culinary world is that they can take even the most uncommon things and make them absolutely delicious. Snails are also so stereo-typically french, haven’t you always been curious about trying them at the very least? My suggestion, have a beautiful glass of white wine to accompany them.

Is there such a thing as too much cheese? Well I guess that depends on who you ask, but I am telling you absolutely not! 😉 Cheese making is a longstanding tradition that dates back thousands of years, and the French takes great pride in their cheeses. In fact, there are specific laws that go into how a cheese is meant to be aged, and labeled. With that much care and attention put into the production, the reward is enormous in the enjoyment of it. And here is a bonus for you that you may not be familiar with: Raclette!! It is literally the best thing ever!  Raclette parties are an event, and because this dish brings people together, that is the best part. There are also plenty of Raclette Restaurants throughout the city and I highly recommend you  check one out, just make sure you bring your appetite! 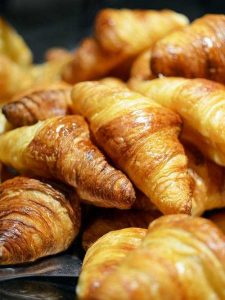 Before visiting Paris, someone once told me that even the worst croissant you can get in Paris, is better than the best croissant you can get anywhere else. And guess what, it’s true. Legend has it that the tradition of the french croissant was brought to France by the legendary madame herself: Marie Antoinette of Austria , from Vienna, who would have officially introduced it in 1770. 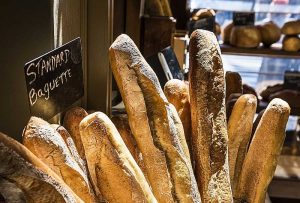 While visiting Paris you have to stop by a Boulangerie and try fresh, handmade Baguettes. There is this image that is synonymous with french culture and that is people walking down the street munching down the street and it is true! The reason being that the baguettes are so good, that it is almost impossible to make it home without biting into one, so make sure you grab two!

And of course, no list would be complete without mentioning everyone’s favorite dessert, Macaroons! They are so good, that you can eat a hundred of them! In fact I encourage that, because it is a great way to try them all and pick out your favorite flavor 😉

For more recommendations and to learn more about French food and the care that goes into them, join us on our Montmartre Walking Tour where we unravel Paris’ Best Art, Culture and Food!