Tradition! Up your Boulangerie IQ 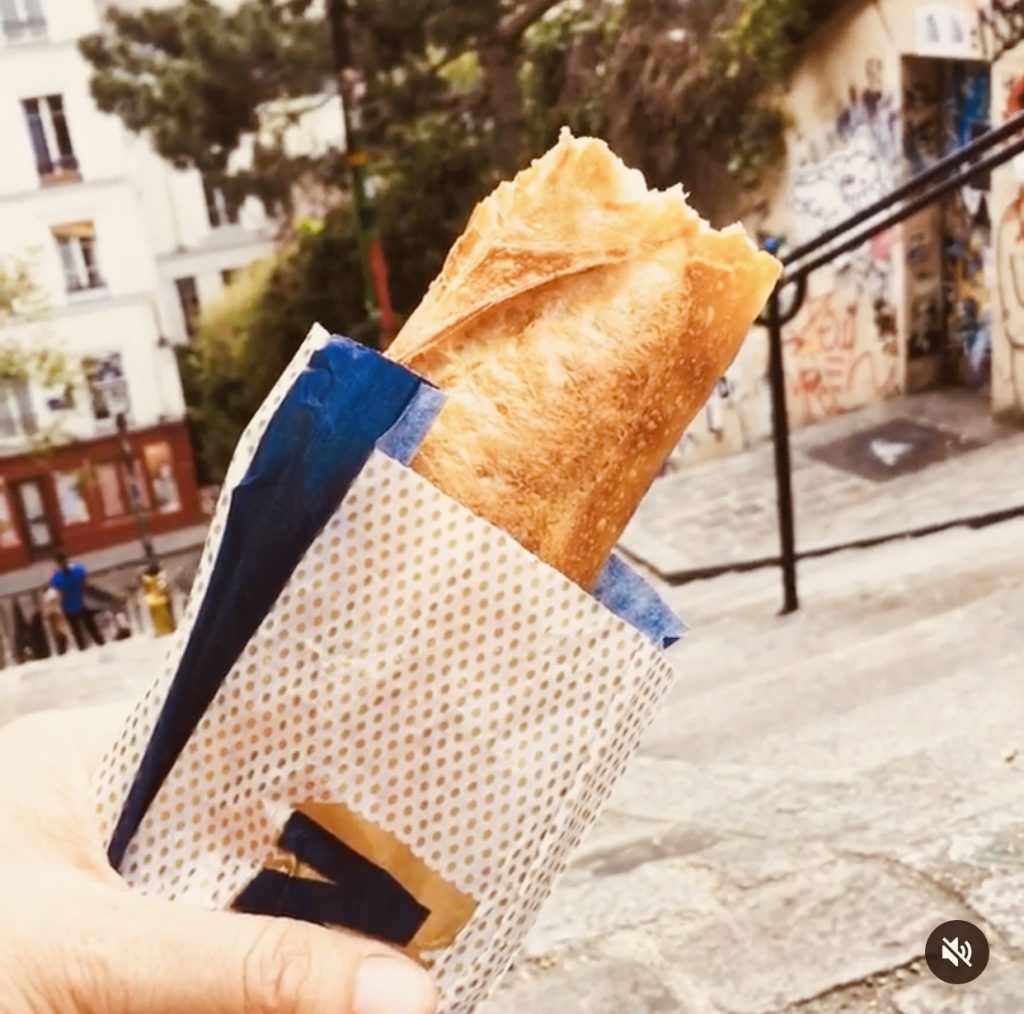 Maybe the first thing to know about buying a baguette, is that you must first look for a Boulangerie — and you will find one around almost every corner so you’re safe. The indication that it is a Boulangerie means that the bread is being made in-house. When the bread products are made off-premises, the establishment is considered a dépôt de pain. Of course, that doesn’t mean the bread isn’t good, but for a novice bread hunter, you’re better off buying from a true bakery with an onsite artisan. There are a number of boulangeries ‘by’ named bakers. Maison Keyser is a well-known one with a number of storefronts throughout the city and Pain Pain Boulangerie & Patisserie par Sébastien Mauvieux in Montmartre is quite the salon of sweets and treats with one of the best baguettes I’ve ever had.

Certainly, you’ve heard the rumor that Parisians take their bread incredibly seriously. Food dispersion to the homeless gives away baguettes de rigeur. Parisian pigeons are fat and lazy due to living off of torn baguette portions. So fat that they often can’t even get out of the way of oncoming bicycles. Let it be stated that the cliche of the Parisian walking home with a baguette tucked under their arm is not a stereotype. It’s not a word of a lie that Parisians are extremely picky about the boulangeries they choose to solicit. There is a yearly competition to crown the best baguette and it is, by far, a more exquisite and socially correct undertaking than any, frankly eye-roll-inducing human beauty pageant. Le Concours de la Meilleure Baguette de Traditional Francaise de la Ville De Paris  is no joke. Reputations are made. A medal is earned. Money is awarded. The champion de la baguette becomes a supplier to the Élysée for one year and, in true French-style, the winner receives invisible but tangible bragging rights for a lifetime.

Now when entering a boulangerie, be prepared for some snoot. I have asked locals about this and what I’m officially told, is that Paris is not particularly a ‘service-oriented culture’. Translated to mean that you should be prepared to receive a fair amount of indifference when ordering anything from a bakery, restaurant, bar, etc. Hopefully, you won’t take offense to this indifference and being prepared to order can help allay this. Who knows, you could luck out and encounter a warmer-than-usual personality at the counter, but brush up on the following items and you’ll rattle off your order quickly enough to avoid the Parisian sigh.

The word baguette encompasses a variety of breads that are iconically French. Long and thin, made of flour, water, yeast and salt, it would seem that there wouldn’t be much diversity in the final product but boy-oh-boy, nothing could be further from the truth.

I haven’t even touched the pastry section available at boulangeries, but remember that a boulangerie isn’t always a patisserie and the treats there might not have been fashioned in-house. Don’t be hesitant to give most anything a go, especially because you’ll quickly notice that these delights are almost always extremely affordable. Some may be misses, but you won’t be out an arm and a leg and they’ll generally still be pretty yummy.

So grab a baguette…and tuck it.