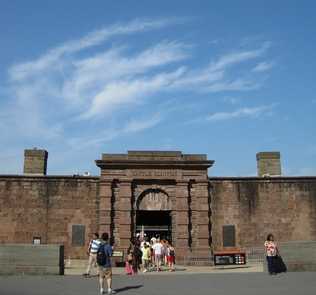 If you asked any local New Yorker, 90% of them would probably have no idea where or even what Castle Clinton is. Standing at the foot of Battery Park, this monument’s history is as long and compelling as that of the city which it calls home. Read on to discover some of the many roles Castle Clinton has played throughout its’ lifetime.

Construction of the circular sandstone fort began in 1808 and took approximately 3 years to complete. Originally known as the West Battery, the structure was renamed Castle Clinton in 1815 in honor of the NYC Mayor at the time- DeWitt Clinton. The design of the building was created by the architecture team of John McComb Jr. and Jonathan Williams (grandson of Benjamin Franklin). While today the fort sits at the base of Battery Park, what we know as the park did not exist back then. So Castle Clinton became essentially its own land mass, built on a small artificial island just off the shore. It was connected to the mainland by a 200 foot wooden drawbridge.

Originally, the fort was built to accompany Castle Williams- the three story fort on Governors Island. Both were intended to defend the city of New York from the British, in the tense years that led up to the War of 1812. However, the British never attacked New York harbor during the War of 1812, meaning neither fort saw any type of action.

By 1821, Castle Clinton was no longer being used by the U.S. Army, so the city made the decision to turn it into a space for public entertainment. It re-opened officially as Castle Garden in 1824. Originally an open-air structure, the decision was made to built a roof in order to accommodate the theatre. For any of you movie buffs out there, you might be familiar with a movie entitled The Greatest Showman. The 2017 film stars Hugh Jackman as P.T. Barnum and features a scene where Barnum invites Swedish soprano singer Jenny Lind to sing in the United States for the very first time. That concert actually happened, and took place at none other than Castle Garden, in 1850.

Shortly afterward, landfill expanded Manhattan into Battery Park and Castle Clinton was incorporated into the mainland of Manhattan.

The second half of the 19th century brought yet another change. Prior to 1855, most of the immigrants arriving in NYC would land at the docks on the east side of Manhattan. But on August 1, Castle Garden began to function as the New York State immigrant processing center, an official emigrant landing depot. It was the first of its kind in the country. Millions of people from around the world entered through the gates of Castle Clinton as their first steps toward a new and better life in America. Some noteworthy immigrants include Nikola Tesla, Harry Houdini and Joseph Pulitzer.

Unfortunately, the center was plagued with scandal over immigration workers cheating and stealing from immigrants. Until eventually, by 1890, the federal government took control of immigration processing and decided to move the center to Ellis Island. The great Ellis Island fire of 1897 destroyed most of Castle Clinton’s immigrant passenger records. But it is estimated that over 8 million immigrants were processed during its time of operation.

Once Ellis Island was opened, Castle Garden was transformed, once again, into the site of the New  York City Aquarium. Drawing thousands of visitors each and every year, it eventually became one of the city’s most popular attractions.

Enter Robert Moses. It is rare to hear a historical tale about New York without hearing his name. Nicknamed the NYC “Master Builder” of the 20th Century, Moses was known for favoring sensible transportation over historical artifacts. As Triborough Bridge and Tunnel Authority Commissioner, Robert Moses stated he wanted to completely tear down the structure in 1941 in order to complete construction of the Brooklyn-Battery Tunnel. Luckily, preservationists opposed to Moses’s plan were able to grant an injunction against demolition and rally enough public outcry in order to further prevent his efforts.

While the building itself was saved, the aquarium was eventually closed and reopened in 1957, at its current location in Coney Island.

Following the incident with Moses, there were six more attempts to demolish the structure, all of which were eventually denied. In 1950, the federal government obtained the property, and by 1966 Castle Clinton was given the title of National Monument and listed on the National Register of Historic Places.

The building was rehabilitated for the final time in the 1970s. Today, it is run by the National Park Service and is the official ticketing office for the Statue of Liberty and Ellis Island.

Interested in learning more about Castle Clinton? See it in person on our Statue of Liberty and Ellis Island tour!