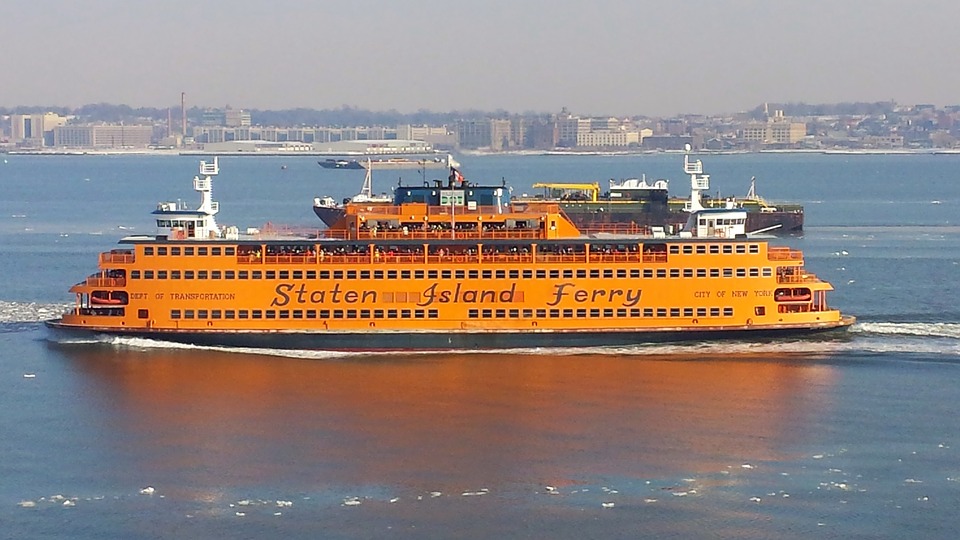 How can an attraction be both famous and a best-kept secret? When it comes to the Staten Island Ferry, although people on Staten Island have been using it for decades, most of New York City’s residents and visitors fail to take full advantage of this phenomenal aquatic service. The nine-vessel fleet shepherds 22 million people every year, or roughly only one third of all the people who reside in and visit NYC.

With 117 daily trips that showcase views of New York Harbor, the Statue of Liberty, and Ellis Island, the ferry serves not just as a journey but also a destination unto itself. And best of all, it’s free of charge.

Here’s a little Staten Island Ferry history to get you started.

In the early 1800s, before our modern bridges and tunnels existed, residents traveled between the boroughs on private two-masted sailboats called periaugers. Then, in 1810, a young entrepreneur decided to start his own ferry service. At the age of 16, Staten Island native Cornelius Vanderbilt (yes, those Vanderbilts) used his birthday money to purchase his own periauger to carry cargo along the river during the War of 1812. He would later go on to finance the construction of Grand Central Terminal and Vanderbilt University, but everyone has to start somewhere.

In 1817, the Richmond Turnpike Company started the first motorized ferry service from Manhattan to Staten Island. That company was later owned by Vanderbilt himself until the City of New York assumed control in 1905. By that time numerous private companies had also operated ferry routes from Staten Island to both Manhattan and Brooklyn, most famously the Tompkins & Staples Ferry and the New York & Staten Island Ferry Company. Due to the popularity of a new invention — the automobile — the early 1900s saw a decrease in ferry use, and all routes from Brooklyn would end by the mid 1960s.

Almost all ferries in NYC had closed down by 1967 due to the competition from automobile traffic. But there was one promising exception for New York’s ferry future.

The line that continued to thrive was the ferry from St. George terminal, Staten Island, to Whitehall, Manhattan, the same route that still operates today. There are two bridges off of Staten Island — the Goethals Bridge through New Jersey and the Verrazzano-Narrows Bridge through Brooklyn — but the ferry remains the fastest, most direct route to Manhattan.

The Staten Island Ferry boasts a 24-hour schedule. That’s right: it never stops. It takes trips every half hour on the half hour, and every 20 minutes during rush hour. Each ferry has a capacity of around 5,000 people, and daily ridership frequently tops 70,000 passengers a day.

It also played a crucial role after the 9/11 attacks at Ground Zero. Emergency responders used the ferries to evacuate attack victims from the World Trade Center and downtown Manhattan. In the wake of the attacks, the Staten Island Ferry only closed for one week before reopening to passengers. For safety reasons, however, vehicle traffic on the ferry was banned.

What You’ll See From the Staten Island Ferry

Assuming you’re not riding with someone who has been on the ferry before, you might need some instruction to make sure you see all the sights. Departing from Manhattan, the first awe-inspiring views will be off the port side to Brooklyn. The Brooklyn Bridge dominates the scene, framing the neighborhoods of DUMBO and Brooklyn Heights for a fantastic panorama.

After about five minutes, the ferry clears Manhattan enough that One World Trade Center (also called Freedom Tower) makes an impressive debut, and the Hudson River starts to form up the west side of Manhattan. If you maneuver to the starboard side you can look across the river to gain impressive views of New Jersey. Whatever you do, be patient, and don’t give up your spot. After about 10 minutes the ferry cruises right by Ellis Island and the Statue of Liberty for one of the best views in New York City.

Guide tip: The action isn’t over after you pass the statue. Keep your eyes peeled for all of the activity around the shipyards in New Jersey because you never know what kind of cool freighter might be sailing by.

On the Brooklyn side, you can also see views of the Verrazzano-Narrows Bridge, which is one of the longest suspension bridges in the world and part of the NYC Marathon route.

Keep in mind that New York Harbor is a salt-water harbor and an extremely active port. Naval vessels and world-famous ocean liners frequently visit the bay. It’s almost impossible to miss the seagulls in the air, but don’t forget to check out what’s under your feet as well. It’s not uncommon to spot the occasional dolphin, and people have even glimpsed a blue whale as far up as the Hudson River.

FAQs About the Staten Island Ferry

Now you can see why I might call the ferry a “best-kept secret” for travelers. It’s not that people don’t know it exists — it’s that most tourists (and certainly locals) wouldn’t think of it as an attraction. But it is.

Here are a few answers to questions we get asked the most as guides.

Why is the Staten Island Ferry free?

This is kind of a long story but a good one.

For most of its history, the Staten Island Ferry cost a fare. In 1990, this was around $0.50 for a one-way trip. This caused some understandable irritation for Staten Island residents, because they had to pay a fare for the ferry and additional subway or bus fare once they arrived in Manhattan. Tensions grew, and Staten Island actually threatened to secede from New York City. That motion unexpectedly made it all the way to Albany, the state’s capital, where legislators almost voted it into law.

Luckily, Mayor Rudolph Giuliani stepped in. As part of an MTA transfer scheme in 1997 (“one-city, one-fare”), Giuliani declared that Staten Island transit riders could pay the single fare on a Staten Island bus or train and get a free transfer to a Manhattan bus or train by taking the ferry at no additional cost, and vice versa. In response, any other competing ferries went out of business, and the Staten Island Ferry cemented its role as king of the hill.

Can you ride the Staten Island Ferry round-trip?

Yes, but no. When departing from Manhattan, the trip to Staten Island takes about 25-30 minutes. Once arriving in St. George terminal, the ferry docks and all passengers have to exit the ferry. So you can’t stay on it.

If you want to take a full round-trip, walk through the terminal to the departure gates on the Staten Island side, and you can board the next ferry back to Manhattan. With some skill and luck, you might be able to time it perfectly and eliminate a layover. However, sometimes it’s out of your control, so budget an additional 30 minutes just in case.

Layovers aren’t the worst thing in the world — the Staten Island terminal boasts concession stands, restrooms, and frequent live entertainment by locals. But maybe don’t drink out of the water fountains, which are popular with a different kind of New York local: pigeons.

Today, the Staten Island Ferry is the single busiest ferry route in the United States of America, and the busiest passenger-only ferry system in the entire world. Its importance to the city cannot be overstated, and it’s definitely a don’t-miss addition to your tour of New York.

Officials have proposed numerous alternatives — bridges, express ferries, a tunnel from Staten Island to Manhattan that was never built. Despite this, the Staten Island Ferry still emerges as the quickest, most reliable, and probably most scenic way to commute between the two boroughs. From transporting cargo during the War of 1812 to rescuing people during one of our nation’s most intense disasters, the ferry has stood proud for more than a century. New York truly wouldn’t be New York without it.