Little Italy in NYC: Top 6 Reasons (and Places) to Visit 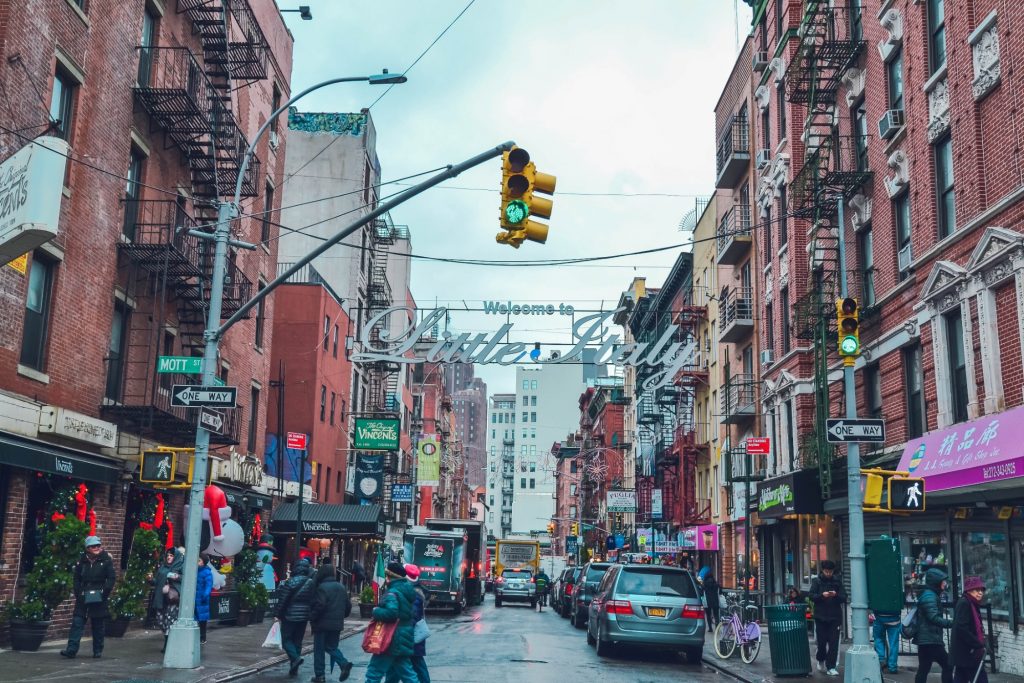 When the moon hits your eye like a big pizza pie, ask for a cannoli and a glass of red wine to go with it. The best — and only — place to indulge in such a fantasy is New York City’s Little Italy, one of the most charming neighborhoods in Manhattan.

Thanks to the waves of immigrants coming through Ellis Island in the late 1800s, New York City welcomed hundreds of thousands of new citizens from Naples and Sicily, who brought with them their customs, language, currency, and a host of family recipes. The Old World vibe still lives on today, by way of a neighborhood that is sadly shrinking and a way of life that is becoming rarer and rarer.

Don’t worry, though — the Little Italy of your imagination still lingers on the corners around Mulberry and Grand. The neighborhood still celebrates restaurants that used to be the haunts of mobsters and mafiosos, Frank Sinatra tunes fill the air, and red and white checkered tablecloths form tapestries that seem to line entire blocks.

Here are six reasons you have to visit Little Italy while you’re in New York City.

1. The cannoli at Ferrara Bakery is legendary.

Every restaurant in Little Italy claims to have the best cannoli, but the only one with the line to prove it is Ferrara Bakery.
Established in 1892, this bakery and espresso cafe has been operated by the Ferrara family for more than 120 years. The menu features more than 200 Italian specialties, ranging from world-famous cannoli and espresso to gelato, cookies, cakes, and savory treats such as lasagna.

2. The pizza at Lombardi’s is the oldest in the country.

Lombardi’s claims to be the first pizzeria in the country. I mean, just look at their URL: firstpizza.com. Since 1905, they have been serving up delicious pies according to the recipe that Gennaro Lombardi brought with him from Naples. Their coal ovens give the crust the perfect amount of crunch to complement the zesty tomato sauce and chunks of whole-milk mozzarella on top.

Lombardi’s is where NYC pizza really got started. It’s one of my favorite pizza places, and my other favorite, Grimaldi’s, is a direct descendant of this pizzeria. If you’re in the mood to walk the Brooklyn Bridge, you can visit Grimaldi’s on the Brooklyn side, too. Yes, I’ve had both on the same day. No, I’m not ashamed.

3. You can party at the Feast of San Gennaro Festival.

Every September, Littly Italy comes alive in a celebration that you simply can’t miss. During the Feast of San Gennaro Festival, joyous citizens take to the streets for an entire weekend of music, feasting, and general revelry. I’ve been a few times and can tell you from personal experience, it’s pretty cool. And it’s the perfect excuse to indulge in all of your Italian culinary cravings.

San Gennaro of Naples was the Bishop of Benevento, Italy, who was martyred in 350 A.D. After being tortured, he was executed at the hands of Emperor Diocletian for staying faithful to Christianity. For more than 90 years, Little Italy’s residents have celebrated their beloved Saint, culture, and traditions with this block party festival in his honor.

4. The cheese at Di Palo’s will melt in your mouth.

Di Palo’s has been run by the same family for four generations, and the fifth generation runs a wine store next door. If you want to see the real Little Italy, this is it. Though the storefront has changed, the family has operated on Mott Street for more than 100 years.

Every year, Lou Di Palo travels back to Italy and brings back the finest meats, cheeses, and specialty foods for his shop. Rumor has it Di Palo’s even played a role in “The Godfather.” As the story goes, Lou’s mom gave notes to Francis Ford Coppola while he was filming outside.

5. You can visit the Church of the Most Precious Blood for free.

With a name like that, why wouldn’t you want to check it out? The Shrine Church of the Most Precious Blood is the cathedral dedicated to San Gennaro, and the start of the San Gennaro feast every year.

Even if the festival isn’t happening while you’re visiting NYC, it’s worth it to tour the church to see items that are important to the feast. To kick off the festivities, parishioners carry a statue of San Gennaro from its home in the cathedral on a procession throughout the entire neighborhood. You can also see the church’s pipe organ, crafted by Henry Erben and installed right after the Civil War.

More recently, the church has merged with Saint Patrick’s Old Cathedral, allowing them to continue operating as an important community and neighborhood center.

6. It’s close to other cool stuff.

Little Italy’s location makes it the perfect stop while you’re exploring other neighborhoods downtown like Chinatown and SoHo. After you chow down on some cannoli or pizza, you can cross Mulberry and Canal streets heading south to venture into Chinatown for some NYC knickknacks or authentic dim sum, one of the many iconic meals of New York City.

If you’re in the mood to shop or try to spot a celebrity, cross Broadway to the west to explore the fashion houses and architecture in SoHo.

Answers to All Your Most Pressing Little Italy Questions

What is the main street in Little Italy?

Little Italy used to stretch about five blocks in every direction, but sadly, as NYC has been built up, parts of Little Italy have disappeared due to development and gentrification. It’s becoming harder for the residents to keep their traditions alive, but you can still see them thriving on the main strip of Mulberry Street that runs through Little Italy.

Little Italy used to have a reputation for being a hangout for mob bosses, but those days are long gone. Now, friendly shop owners line the sidewalks, inviting you in for a plate of spaghetti or scoop of gelato.

Where should I eat in Little Italy?

I briefly covered this above with recommendations for cannoli, pizza, and cheese, but I’ll add a few more to the list, backed up Eater’s list of the best places to eat in Little Italy.

Not only do they agree with me on Lombardi’s, Ferrara, and Di Palo’s, they include classics such as Parm, where I got the best chicken parm sandwich I’ve ever had. I also agree with their recommendation for Umberto’s Clam House, which — along with serving up reliably fresh seafood — is the site of an actual mob hit four decades ago.

Little Italy: An NYC Neighborhood for Food, a Festival, and Culture

Although Little Italy isn’t as big as it used to be, the culture and spirit is as strong as ever. It’s a neighborhood that has deep roots that live on today. If you’re in the mood for some Old World charm, Little Italy still feels like it was plucked from the pages of Old New York, where the restaurant owner knew your name, the pizza was extra cheesy, the espresso was piping hot — and you didn’t have anywhere else to be.

On my first trip to NYC when I was 15, taking a taxi down to Little Italy for a heaping plate of lasagna was an important event for me. Of course, now I know I could have taken the yellow N, Q, R, or W subway lines to Canal Street and saved myself $25.

However you decide to get there, a journey to Little Italy, especially in combination with SoHo and Chinatown, can be the perfect itinerary for a morning or afternoon downtown.