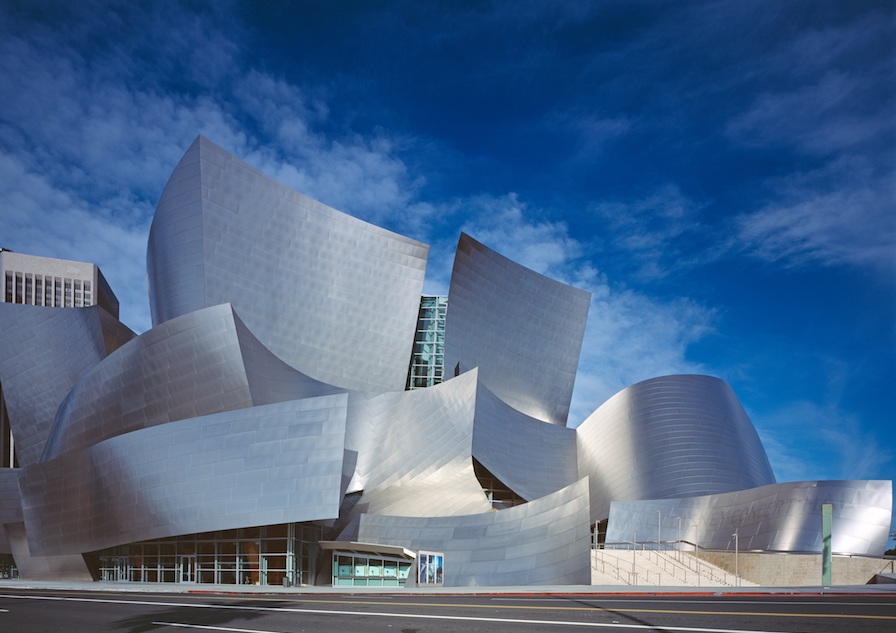 The newest home of the Los Angeles Philharmonic, the Walt Disney Concert Hall is now one of the landmark buildings in the city. Since the concert hall is only one block away from The Broad (to the south) and Grand Park (to the north), you can easily combine the three destinations on your cultural tour of downtown LA.

In this article, I’ll share a bit about the architecture and even some “hidden gems” of the building, including a rooftop garden and little-known gallery. I’ll also cover why you should consider getting tickets to see the LA Phil in action, plus practical tips for your visit, whether you’re attending a concert or not.

What to See Inside and Atop the Walt Disney Concert Hall

There is more to the Walt Disney Concert Hall than simply being a venue for musical performances — though you should try to attend a show here at least once. Beyond the music, here are the things you can expect to see at this famous concert hall.

Boring, this building isn’t. The asymmetrical concert hall is designed by Frank Gehry, the architect famous for his oddly shaped, postmodern buildings. The Walt Disney Concert Hall is no exception, and it’s instantly recognizable as you drive by. Outdoors, the curved all-metal exterior creates the illusion of silver sails.

Inside, the stage and auditorium are created from wood for the best acoustics. Don’t miss the 6,134-pipe organ with a design reminiscent of French fries. It’s hardly traditional, which fits perfectly with the design of this contemporary building. (See the video at the bottom of the post for a visual and some history.)

In LA, we’re all about rooftop fun. So yes, there’s absolutely a rooftop garden at the concert hall. It’s a lush acre that contrasts with the metal exterior of the building. The garden is also free to visit. There is seating available, so if you’re tired after walking around downtown, come up to enjoy a break in the shade among the trees and flowers. You’ll probably run into someone doing a photoshoot here — it’s that gorgeous.

One of the prettiest spots in this garden is the fountain, A Rose for Lilly, shown in the photo above. Gehry created the fountain as a tribute to Lillian Disney, the late wife of Walt Disney. Lillian gave the initial donation to build the concert hall — although it was unfortunately finished six years after her death. The fountain is made from broken pieces of Lillian’s favorite Royal Delft Blue porcelain.

Not many know there is an art and music gallery inside the Walt Disney Concert Hall. The Library of Congress Ira Gershwin Gallery on the second floor of the building features a rotating selection from its permanent collection and hosts special exhibitions such as the recent “L.A. Murals” photography exhibit.

You can visit the gallery while waiting to attend a performance or if you’re taking a tour of the concert hall. You’ll need a ticket to either a performance or a tour to enter the venue. Tour tickets are free.

The best way to experience the concert hall, of course, is to attend a concert here by the Los Angeles Philharmonic (locals just call them the LA Phil).

Lined with Douglas fir and oak, the concert hall is praised for its acoustics. The LA Philharmonic performs a wide range of music from classical to jazz. Commonly, the Philharmonic hosts performances at the Walt Disney Concert Hall from October to June and moves to the Hollywood Bowl in the summer.

Tips for Your Trip

Planning to check out the Walt Disney Concert Hall? Here’s some helpful info that will probably answer any questions you have left.

Can you go inside the Walt Disney Concert Hall?

Other than attending a concert at the Walt Disney Concert Hall, you can also take a tour of the interior. There are self-guided audio tours and guided tours offered most days, and both types of tours are free. You don’t need to reserve the tours in advance for groups less than 15, but do check the schedule, especially for the guided tours. The audio tour is narrated by award-winning actor John Lithgow, so feel free to pretend he’s guiding you on the tour.

While the tour takes you through most of the interior, it doesn’t include the auditorium since the space is constantly used for rehearsals and performances. For that, you’ll need to see a show.

Where do you park for the Walt Disney Concert Hall?

Parking is available underneath the concert hall for a flat rate of $9 and is available two hours before performances (or all day on weekends). Beyond those hours, find parking at one of the paid lots in the neighborhood.

Not driving? Check out our guide on how to take public transportation in LA.

Where can you eat near the Walt Disney Concert Hall?

You’re in DTLA, so there are plenty of options.

Sad to say, one of the most famous dining venues, the upscale restaurant Patina, located inside the Walt Disney Concert Hall for the past 31 years, is slated to close August 2020. You can still visit their sister restaurants around LA, including Ray’s and Stark Bar at LACMA and, close to the concert hall, Kendall’s Brasserie at The Los Angeles Music Center.

If you’re looking for another elegant dinner nearby, try Otium. Next door to The Broad museum, Otium isn’t too fancy to serve chicken and waffles alongside quiche Lorraine — and curated cocktails with everything.

For something more affordable, there’s also Au Lac, which dishes up creative vegan Vietnamese food. Grand Central Market is another downtown LA must-do for local flavor, offering a variety of cuisines to sample, from tacos to Thai.

If you’re visiting downtown LA, the Walt Disney Concert Hall’s unusual architecture is worth spending an hour to check out while you’re exploring the city. Music lovers should consider attending an LA Philharmonic performance here, too, so you can see — or hear — for yourself what makes this place incredible.

Looking for more cultural attractions in Los Angeles that won’t break the bank? Check out our list of top free museums to visit in the City of Angels.