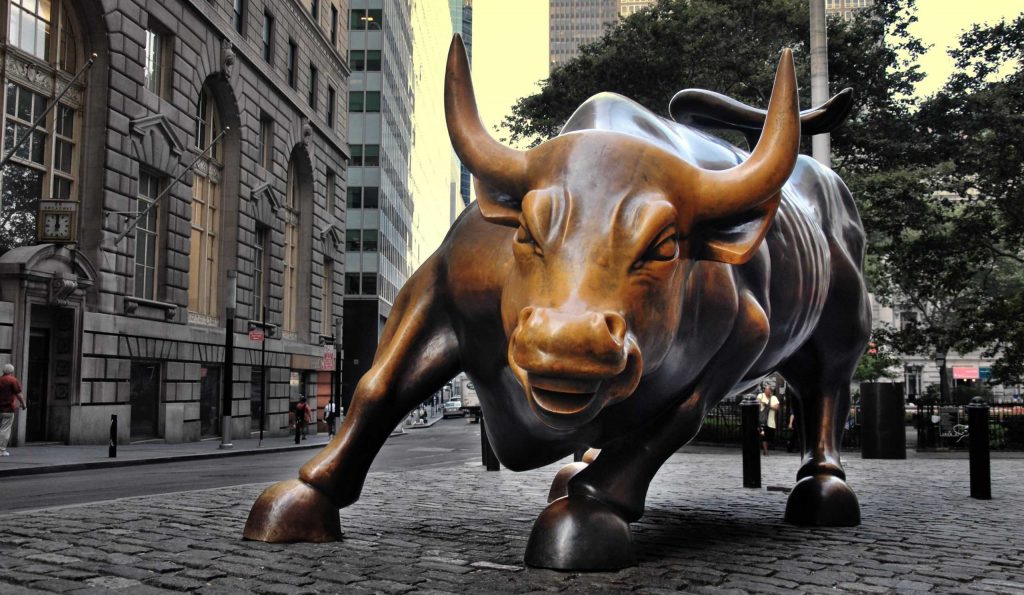 The Charging Bull in Lower Manhattan is a staple of NYC! But how did it get there? What does it mean?

The Charging Bull has been seen as a symbol of the American Stock Market. It is also one of the most popular sights in New York City. Tourists journey from all around to see the bronze beast. They strike poses and snap pictures at all hours. But the inanimate attraction hasn’t always been such a hot spot. In fact, the legendary statue isn’t even in its 30’s!

The creator of the Charging Bull, Arturo Di Modica, is an Italian American artist born in Sicily in 1941. Di Modica started sculpting in his teen years and quickly began to get recognized for it. By the age of 19, he moved to Florence. Within 12 years, he became known throughout Italy for his sculptures. In the early 70’s, Di Modica moved to New York and opened a studio on Grand Street. His work was presented everywhere from Rockefeller Center to Battery Park. Eventually, his (arguably) most famous sculpture would be built.

Di Modica created the Charging Bull using $360,000 of his own money! The sculpture weighs over 7000 pounds and stands a whopping 11 feet tall. You can find the Bull in Bowling Green near Battery Park and Wall St. However, this was not the original location of the Bull. On December 15th, 1989, Di Modica set out during the early hours of the morning to place the statue. With the help of the Bedi Makky Art Foundry, they found a home for the Bull right outside of the New York Stock Exchange on Broad Street. One of the most interesting aspects of the statue is that it was placed there illegally!

The artist’s reasoning for creating the sculpture was a result of the Stock Market Crash of 1987. The world’s economy felt the affects. From New York to Hong Kong and everything in between. To Di Modica, the Bull was a symbol of the ”strength and power of the American people.”. The gift was not as well received by the NYPD. They removed the statue by day’s end. But thanks to the Parks Service, it was soon reinstalled at it’s permanent location.

The Charging Bull still enjoys an immense degree of popularity. Di Modica put the statue up for sale in 2004 under the condition that it remain in the same place. However, he still owns the copyright for the piece. In 2010, during the Occupy Wall Street movement, the Bull was under constant police surveillance.  For a few years, it wasn’t even accessible to the public!

Excited to see the Charging Bull in person? We hope you’ll join us for our Lower Manhattan Tour. It’s one of many sights we cover on this walking tour of Wall Street and Ground Zero.

Wall Street is named after an actual wall.  No, really. When the Dutch first colonized the island of Manhattan, they built a wall to separate their colonies from…

In about 47 seconds, the One World Observatory (OWO) elevator rockets its riders 1,300 feet in the air. As the doors open, visitors find themselves on the 102nd…

So you’re ready to explore New York! Whether you’re planning for a weekend or you’ve been here for years, there’s so much to see that you’d need a…