Guide to the Palais Garnier: How to See the Paris Opera House 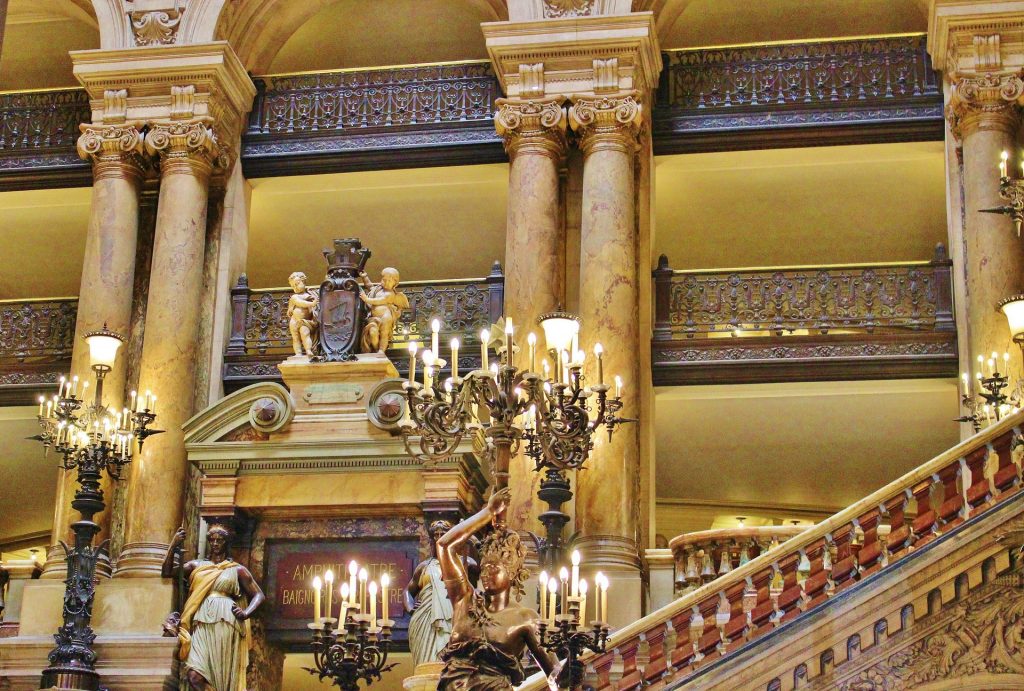 The Palais Garnier, home to the Opéra Garnier, is a place of art, beauty, and even intrigue.

You can appreciate its art and beauty in the live shows and lovely architecture that brightens the 9th arrondissement of Paris. And there’s some intrigue thanks to its connection to the famous Phantom of the Opera, which still draws adoring fans to the opera house today.

Want to see this photo-worthy landmark? Here’s everything you need to know before visiting the Palais Garnier in Paris.

Where to find the Opéra Garnier

The Opéra Garnier is in the busy 9th arrondissement in Paris, right at the corner of Scribe and Auber streets. Appropriately, it holds court at the center of the Place de l’Opéra.

It’s accessible from the metro stop Opéra on lines 3, 7 and 8, or the station Auber on the RER A.

Local tip: If you like shopping, Galeries Lafayette Paris Haussmann is just a short walk away.

The Opéra dates back to the mid-19th century when French architect Charles Garnier designed the building in the Second Empire Style, a term used to describe architecture heavily influenced by the Italian Renaissance. It officially opened on Jan. 5, 1875. And if you were curious, the very first opera performed here was “La Juive,” a five-act libretto featuring forbidden love, vengeance, and plenty of dramatic arias.

And what about that connection to the Phantom of the Opera connection? The famous play is based on none other than the Opéra Garnier in Paris.  The famous tale of a haunting love triangle was a hit on Broadway and in England. While the story is fictional, the setting was inspired by the beautiful maze-like interior of the Paris Opéra. You can take a Phantom-themed tour of the opera house to see for yourself.

The Mysterious Underground Lake of the Paris Opera House

Yes, there’s an underground “lake” at the Opéra Garnier. Unfortunately, no one (guests and employees alike) have access to it.

Rumor has it, French firefighters use it to practice mock rescues here. What we do know is that the eerie subterranean reservoir inspired the French writer behind the “Phantom of the Opéra” novel, who decided to set the phantom’s lair there.

In reality, the “lake” is actually a cistern used to manage the groundwater below the building’s foundations.

What to Expect Inside the Opéra Garnier

The opera house is as extravagant and imposing as the different shows you can enjoy there. It seats over 2,000 in its massive gilded auditorium. But it’s not just a theatre. The architecture and art is an experience all on its own.

Here’s what to see before you take a seat.

When you enter the Palais Garnier, you’ll find yourself at the “Rotonde des abonnés,” a glamorous rotunda with a decorative ceiling. This is where you can buy tickets, but it’s also a great place to snap photos. Look for the sculpture of the Greek goddess Pythia right underneath the grand staircase.

It’s the classic opera house: plush red seats and gold trimming. The auditorium is breathtaking when you see it for the first time, with a structure made of everything from stucco to velvet.

Of course, there are two stars of the theater — and I’m talking about stars on the stage. One is the 8-ton bronze and crystal chandelier, complete with 340 lights. The other is the house curtain. The original, painted according to Charles Garnier’s instructions, was replaced with a replica, first in the 1950s and then in the 1990s.

If you are a fan of awe-inspiring mosaics, don’t skip this section of the Palais Garnier.

The long gallery has a colorful painted ceiling with themes from music history. But the main thing to look out for is the replica of Charles Garnier’s bust near a window looking toward the Louvre.

This means “grand stairway,” and it certainly is a fitting name. The marble double staircase, with various chandeliers lighting the way up each step, leads to different floors of the opera house. And it’s vault is nearly 100 feet high.

This isn’t just a library — it’s an impressive museum in it’s own right with 300 years’ worth of history. Along with books, you’ll find paintings, drawings and set models.

The Palais Garnier library actually falls under the French National Library system and is open to the public 10 a.m.-5 p.m. daily. While the reading room is reserved for researchers only, the museum section of the library is part of the opera house tour.

This famous opera house is too big for one name. You’ll find it referred to as the Palais Garnier or the Opéra Garnier. The name Garnier is a nod to the architect behind the building, Charles Garnier. But the building has had a few names over the years, including “National Academy of Music,” which you can see emblazoned on the front in gold letters as “Académie Nationale de Musique.”

Before going inside, take a moment to admire the exterior. It’s heavily decorated all along the many-columned facade. Besides the sculptures embedded into the front of the palace, you’ll notice gold winged statues on either side of the roof and a central sculptural group at the very top. That’s Apollo, Greek god of music and dance (and the sun and other things), holding a golden lyre with the figures of Poetry and Music by his side.

If you like classical sculptures referencing mythology and ornate, gilded architecture, you definitely should go inside the Palais Garnier.

Fortunately, there’s no need to watch a show to take in all of the Palais Garnier’s glamour. You can opt for a guided or self-guided tour of the Opéra. Group tours happen daily starting at 10 a.m., with the last tour at 5 p.m. Individual tours are offered in the afternoon in both English and French.

On a budget? You can walk inside for free, just to get a glimpse of the lobby. But to get any further and see more of this palace, you’ll need to sign up for a tour or ticket.

But a virtual tour is always free. The Opéra Garnier teamed up with Google Cultural Institute to provide an in-depth look at all the building has to offer, so opera-lovers can take the tour from anywhere in the world.

You can catch a variety of shows at this Paris opera house — not just operas.

There are certainly plenty of classic operas, often sung in Italian, but there are also ballets and concerts highlighting work from composers like Mozart, Bach, and Vivaldi.

Before you book, take a look to see if you can get discounted tickets. The Opéra Garnier offers special pricing for those under 28 and gives another discount for those under 40.

Answers to Your Questions About the Palais Garnier

Is the Palais Garnier open to the public?

Yes, it is. You can tour it for a fee or stop into the lobby where you would buy tickets, just to take a peek inside. The opera house is open from 10 a.m. to 5 p.m.

What can you do nearby?

Hardly a block away from the Palais Garnier is the Galeries Lafayette, a shopping experience with all of the luxury brands you can think of. In fact, if you go to the rooftop of Galeries Lafayette, you’ll get a direct view of the opera house and the Eiffel Tower.

If you have a sweet tooth, you have to go to Fauchon, a high-end pastry shop a short walk away near the Madeleine metro stop on line 12, 14, and 8. They’re known for their gold-encrusted hazelnut tart. You must give it a try.

If you’d like a nice bar, check out Harry’s New York Bar, merely a five-minute walk away. It’s legendary — the bloody mary was invented at this famous cocktail joint.

Why is the Palais Garnier famous?

The Palais Garnier is one of many monuments dedicated to Paris’ rich art history. It’s Second Empire architecture captivates tourists and locals alike.

But one of the main draws — apart from the impressive concerts — are its ties to Andrew Lloyd Webber’s smash Broadway hit, “The Phantom of the Opera.”

Art, Architecture, and History at the Opéra Garnier

Like many Paris monuments, this place packs a lot into one location. It’s an opera house, museum, library, and architectural marvel. With nearly 480,000 visitors each year, the Palais Garnier is one of Paris’ most visited monuments. It has been listed as a historical monument since 1923.

Whether you want to enjoy the architecture from the outside alone, take a tour indoors, or splurge on a show, this is an easy add to your Paris itinerary, thanks to its central location not far from the Louvre.

Looking for another landmark that pulls double (or triple) duty? Check out our guide to the Panthéon, a monument, crypt, and art gallery all in one.