Guide To the Colosseum: How To Visit and What To See 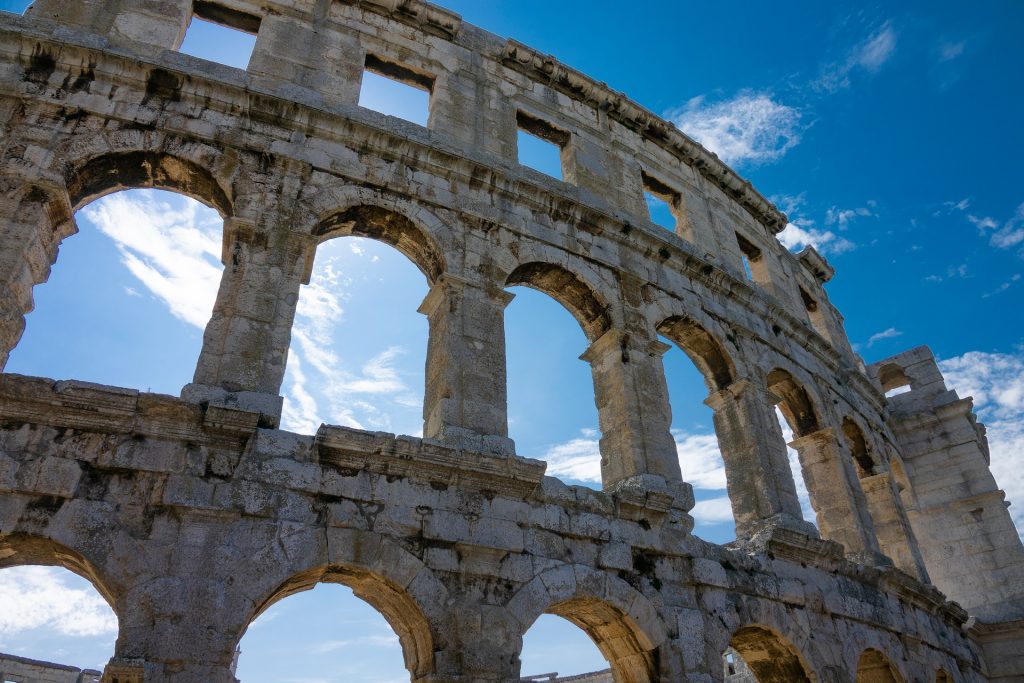 Conquering the test of time, the Colosseum is a majestic symbol of a past civilization that still awes visitors today. It reflects the engineering genius and strength of the Roman Empire while also providing a glimpse into the cultural life of everyday Roman citizens.

The Colosseum, aka the Flavian Amphitheatre, was constructed in only eight years around 70 CE under the rule of Vespasian, who was part of the Flavian dynasty. It was built on the former site of Nero’s villa, which had an artificial lake that had to be drained before the Colosseum’s construction.

This was an important move on Vespasian’s part — a kind of killing-two-birds-with-one-stone situation. He was able to erase the remnants of a tyrannical emperor’s symbol of wealth and decadence while providing something useful for the people of Rome.

These days the Colosseum is a great place to visit to get a sense of what life was like in ancient Rome. So let’s have a look at some of the highlights of this grand and enduring monument.

Why the Colosseum is a cultural landmark

The Colosseum is a showstopping building even by today’s standards, and trying to imagine how the Romans were able to build such an imposing structure is an intriguing subject. But with the labor of around 60,000 Jewish slaves and more than 1 million tons of stone quarried from nearby Tivoli, the Romans were able to pull off this engineering marvel.

This ancient amphitheater could accommodate 50,000 spectators and was meant for all Roman citizens: women, men, rich, poor. But of course, there were seating arrangements according to social status — women and the poor had to sit in the upper decks while wealthy men had the better seats near the arena.

But the Colosseum is not just an important historical monument. It has its place in modern-day @life as well. Its architectural designs are still used for contemporary stadiums. Some of these features include the use of oval passages to facilitate the easy entry and exit of people as well as the placement of arches that are used to support the building. Given our technology, the idea that this 2,000-year-old design is basically the prototype for modern stadiums is pretty impressive.

How the Colosseum was used over the years

Everyone knows the Colosseum was a place for entertainment involving gladiators and fights between exotic animals. Yet over time, as public interest in the games waned, the Colosseum was eventually abandoned. By the 6th century, it was used for housing, animal stalls, a marketplace, and even a cemetery.

In 1349, the Colosseum suffered damage from an earthquake and entire sections of the structure collapsed. Up until the 18th century, it was used as a quarry for other buildings and churches built in Rome. This is why today only part of the Colosseum remains.

The future of the Colosseum

The Colosseum will soon be getting a facelift with a new, retractable floor.

The Italian government has allocated $12 million for this project. It will restore the floor and some of the features of the original arena including replicas of lifts and trapdoors used in Roman times. With the retractable floor, visitors will be able to experience what it was like to stand in the center of the arena, while still having access to the underground labyrinth that we can explore today.

Work is expected to begin later this year and should be completed by 2023.

How to organize your visit to the Colosseum

The public transportation networks that serve the Colosseum are Metro Line B, stop Colosseo; Buses: 51, 75, 85, and 11; Tram Line 3.

Currently, the Colosseum is open daily from 10:30 and you can purchase your tickets online.

For details see the Colosseum’s official site. The Colosseum is always closed Jan. 1 and Dec. 25.

With 2,000 years of history, architecture, stories, and wonder in this global attraction, visiting this amazing place on your own might be a little overwhelming. Our tour of the Colosseum makes sure you don’t miss the incredible experience of seeing this monument with an expert guide. You’ll also enjoy skip-the-line access and an express itinerary that helps you make the most of your time here in Rome.

Why is it called the Colosseum?

Some might think it got its name because of the large size of the building itself, but it really came from a 100-foot colossus bronze statue of Nero that was placed near the amphitheater when the Colosseum was built. Unfortunately, the statue is no longer there.

What is the best time of year to visit the Colosseum?

Speaking of which, make sure to prepare for the weather by wearing light natural fabrics in the summer. And always wear comfortable walking shoes!

What can I bring on my visit to the Colosseum?

You can bring plastic water bottles, cameras, and small bags. If you run out of water, no worries — there are fountains in the arena.

In a world that is constantly evolving, this ancient structure serves as a reminder of what we were able to achieve over two millennia ago and how that history still impacts our modern life. It is a must-see for anyone visiting the Eternal City.

If you’re looking for something to do after your tour, I recommend stopping for a drink at one of these nearby rooftop restaurants and bars with picture-perfect views of the Roman Colosseum.