History of the Haunted Subways of New York City 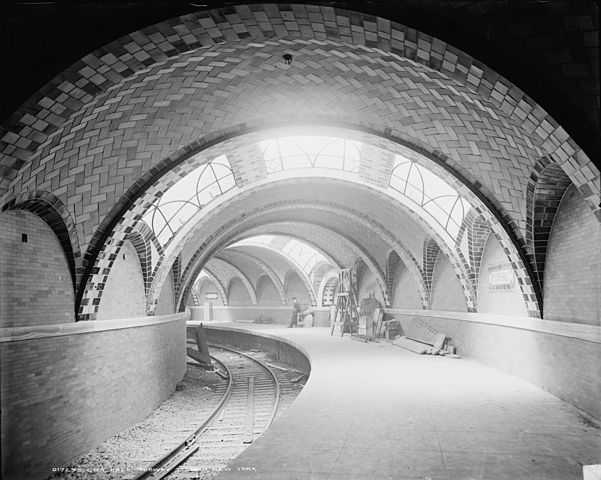 Running deep through the dark underworld of New York City, the subway system is home to its fair share of spooky stories and unexplained occurrences. Swipe your MetroCard and stand clear of the closing doors if you dare to ride New York’s Haunted Subways.

Since the beginning, the MTA tracks have played host to any number of scary stories, real and imagined. We’ve dug up these five strange tales.

The Ghost Train of Astor Place

When traveling alone through Astor Place station, be sure to double check your train before boarding. It may not be the 6 arriving.

Several people claim to have seen a mysterious spectral train, dating back to the opening days of the station, in 1904. Those who have peeked inside say that this strange car is lavishly furnished, with leather couches, silk curtains, and even a wood-burning stove.

One could easily dismiss these claims if not for the uncanny resemblance to the private car of one August Belmont, Jr., the CEO of the company that built the station.

Visitors to Grand Central Terminal have claimed to witness a small Scottish Terrier wandering the building. Try to follow him, however, and you’ll run into seemingly solid walls.

A bit of research reveals the pup’s true name: Fala. Once FDR’s trusted sidekick, Fala wanders the halls of the terminal, still searching for his master. Follow him long enough, and he might just lead you to FDR’s secret train station, deep below the Waldorf Astoria. Long considered legend, this is certainly one of NYC’s most haunted subways.

Once the jewel of the subway system, the beautiful City Hall Station now lies empty and unused at the end of the 6 line. Its’ cavernous ceilings, now mostly silent, once echoed more than just the footsteps of passengers.

During the construction of the station, workers claimed to hear a strange, unidentifiable noise late at night. Once of the workers, a member of the Leni Lenape tribe, recognized the sound as language. The station was being built on the site of an ancient battle, and the moans belonged to the warriors lost that day. These agitated spirits lamented their lack of a proper burial until a shaman performed a ceremony allowing them to rest. Or so the story goes.

A Ghostly Mayor Rides the Rails

The day the subway opened for passengers, New York City changed forever. Everyone was thrilled at the freedom the system provided. Crossing from Harlem to Wall Street went from a two-hour journey to a 15 minute jaunt.

Even the Mayor was swept up in the excitement. George McClellan was so enthralled with the new trains, he asked the conductor if he might take the throttle. Concerned, but unwilling to offend the most powerful man in the city, the IRT officials demurred for a few seconds. Imagine their frustration when Mayor McClellan refused to yield, driving the train most of the way to Harlem before relinquishing the controls.

Even death couldn’t smoother the Mayor’s infatuation with the rails. Many travelers claim to have seen this spectral engineer running the controls on the 6 train to this day.

A Tunnel Of Doom, No More?

We’d like to leave our readers on a brighter note with news from the 191st Street Station. Once a 900ft long terrifyingly dark and dingy hole, the tunnel was perhaps the freakiest place in the entire subway system. It earned the nickname “Tunnel of Doom.”

But now through the efforts of the city and several well-respected artists, the tunnel is a much brighter spot for straphangers. With beautiful colorful murals lit by warm LED lamps, this once gloomy passageway is now much safer from dangers, normal and paranormal.

Come visit NYC in the fall and hear some ghost stories first hand. Our One Day New York tour is an excellent way to see the city, and who knows, we might just wander into a few haunted subways on the way!