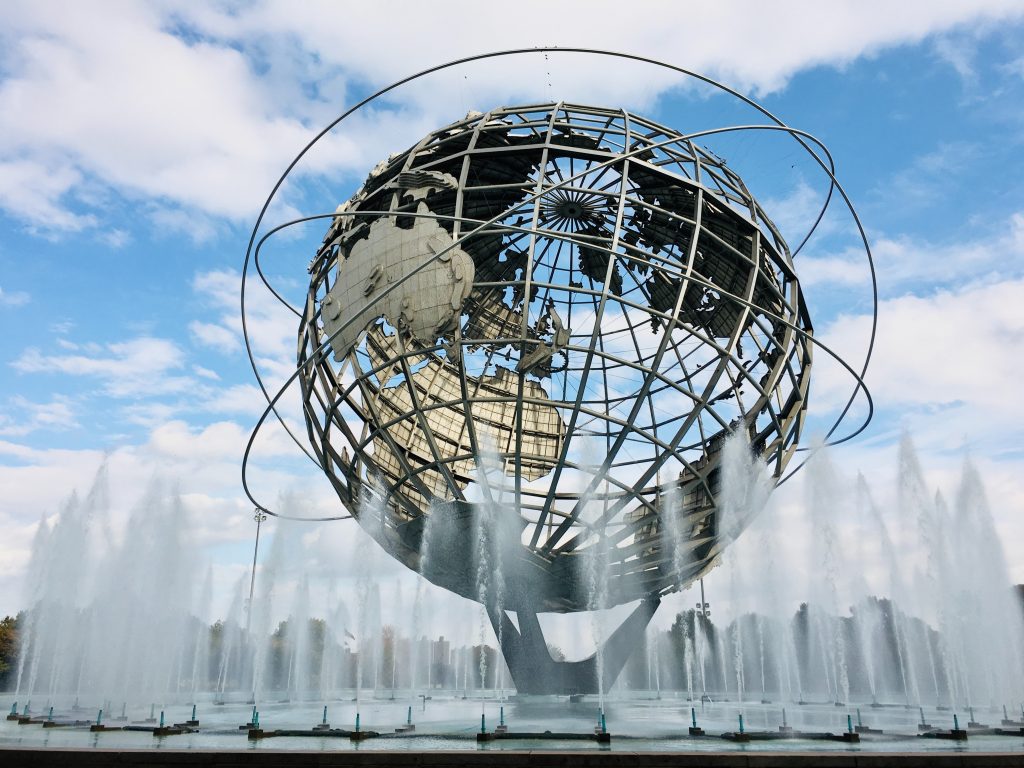 In between the neighborhoods of Flushing Meadows and Corona in Queens, New York is one of the city’s most iconic and historic parks. Flushing Meadows Corona Park was the site of two World’s Fairs in the 20th century and currently hosts the U.S. Open, the Queens Museum, and a beautiful public park.

In this post, we’ll explore the park’s past, along with everything that makes it special and worth visiting today. From historic and scenic walking trails, to sports and community activities, there is so much about the park to learn and to love.

So let’s take a journey through time and Flushing Meadows Corona park.

The name of the park comes from the neighborhoods on either side. This area was first settled by Algonquian Native Americans and eventually taken over by the Dutch in 1640. Flushing was originally known as Vissingen (after a city in the Netherlands) and then shortened to Vlishing. The arrival of British settlers changed the name to Flushing.

Current day Corona was once the Dutch settlement of Newtown, eventually known as West Flushing. In the late 1800s, Italian immigrants were said to have renamed the area after moving into residences developed by Crown Building Company. (Try saying Crown in a stereotypical Italian accent.)

Wealthy landowners began building farmhouses while the meadows and wetlands (now the park) provided all kinds of natural resources. But by the 1800s, roads were built across the meadows and several railroads were laid out through the site. The area very quickly became a waterfront resort for affluent New Yorkers.

Due to the Industrial Revolution, the wetlands became an ash dump at the turn of the 20th century. Since it was so far away from the developed parts of New York, the land was considered almost worthless.

In 30 years of filling, the Corona Ash Dump held around 50 million cubic yards of waste and had mounds that rose 40-50 feet high. Many local residents fled due to the strong odors, rat infestations, and increase of mosquitoes. F. Scott Fitzgerald famously referred to the dump as the valley of ashes in “The Great Gatsby.” The garbage trains were even accused of causing a polio outbreak in 1916.

Read more: We did a whole post about the TV shows and movies filmed in Flushing Meadows Corona Park, and we even mentioned Fitzgerald’s book.

The idea of creating a park came shortly after this time period — in preparation for one of the world’s most celebrated events.

In both 1939 and 1964, Flushing Meadows Corona park hosted the largest international exhibitions to ever be held in the country. The World’s Fair was a huge worldwide event, meant to showcase the various achievements of nations.

The park was created in preparation to be the site for the fair in 1939. NYC Parks Commissioner Robert Moses saw an opportunity to rehabilitate the land and utilize the park even after the World’s Fair ended. So 450 workers worked round-the-clock to make the vision a reality.

In 1939, the theme was “The World of Tomorrow,” showcasing technological innovations and visions for the future. A whopping 10,000 trees were planted in the area.

Fun fact: Meadow Lake, the boathouse, a marina at Flushing Bay, Willow Lake and the New York City Building were constructed for the fair. All of these survive to this day.

After the fair ended, the site was supposed to be cleared and re-open as a city park, but the beginning of World War II delayed this. But two other attractions opened in the meantime — an ice skating and roller rink in the New York City Building and a public pool in the New York State Marine Amphitheatre.

Beginning in 1946, some of the buildings from the World’s Fair were used as the first temporary headquarters of the United Nations. It was suggested that the area become the permanent headquarters, but its distance from Manhattan and concerns over the strength of the land for construction resulted in their move in 1951.

Then a couple decades later, the park was selected to host another World’s Fair. The theme this time was “Peace Through Understanding.” The Unisphere was built, along with the New York State Pavilion, New York Hall of Science, Terrace on the Park, Queens Botanical Garden and Shea Stadium.

The 1964 fair also featured the famous Panorama of the City of New York, inside the New York City Pavilion. This giant scale model of the entire city was one of the biggest attractions.

The pavilion is one of only two buildings that survived from the second fair and remains in its original location. It’s now the Queens Museum of Art and still houses the Panorama. (More on that later.)

After the 1964 fair, the remaining funds were used to rehabilitate the site into a true park. It officially opened in 1967. But within a few years, the park fell into disrepair, with wild animals coming back to the area. Improvements throughout the 1990s and 2000s, and an $80 rehabilitation in 1987, revitalized the park and brought it back from the dead.

Today, Flushing Meadows Corona Park is the fourth largest park in New York City and the largest in Queens, with almost 900 acres of land.

Visitors from all over the city continue to visit the area and enjoy many of the sites and activities that the park has to offer. There’s soccer, tennis, baseball, and volleyball. You’ll find a wildlife conservation center, a recreation center, a skating rink, and an Olympic-sized indoor pool. Plus, there are multiple lakes and trails for walking, biking and kayaking.

Meadow Lake is home to the Hong Kong Dragon Boat Festival, a series of boat races taking place in the lake each year.

Guide tip: The park also plays host to the Queens Night Market, a summertime food market that features all types of cuisines from various different countries. It’s both fun and affordable!

There’s another food festival on the third weekend of May, the World’s Fare, hosted in the parking lot of Citi Field. Citi Field was built in 2009 to replace Shea Stadium and is now home to the beloved New York Mets.

There’s even a Playground for All Children, one of the first playgrounds specifically designed to include handicapped-accessible activities.

Remnants of the World’s Fairs

Through the park, you can still see many landmarks and buildings built during one of the World’s Fairs.

The Unisphere, which was built as the symbol for the 1964 fair, has since become the main sculpture inside the park. The Flushing Meadows Carousel is still in operation.

The Queens Theatre in the Park, the Queens Zoo and the Flushing River are all remnants as well. Other major monuments include Forms in Transit, The Rocket Thrower and Freedom of the Human Spirit — all from 1964.

The New York Hall of Science was one of the country’s first science museums and still operates in its original location. There’s also two time capsules buried in the park, designed to last 5,000 years each. You can find them marked with a granite monument.

And while the New York State Pavilion is still intact, today it sits empty and neglected.

In 1978, it was decided to move the U.S. Open from Forest Hills to Flushing Meadows Corona Park, in the USTA Billie Jean National Tennis Center.

This area of the park is also known as the “Sport Center” zone. The center court is Arthur Ashe Stadium and the secondary court is Louis Armstrong Stadium.

The event brings more than 700,000 people from around the world to Flushing Meadows Corona Park every year.

The Queens Museum sits inside the former New York City Building. It was founded in 1972 as an art museum and educational center.

The permanent collection consists of about 10,000 items, many of which are artifacts and memorabilia from the 1939 and 1964 World’s Fairs. This includes a scale model of the 1964 site.

If you’re an admirer of Tiffany Glass, check out the Neustadt Collection, a huge collection of windows, lamps, etc. all composed of the glass. It’s been an ongoing project since the mid-1930s showcasing the history of the creation of Tiffany’s work.

By far the most famous exhibit is the Panorama of the City of New York. This was commissioned by Robert Moses for the 1964 fair. It’s a total of 9,335 square feet and includes every city building, in all five boroughs, constructed before 1992.

The panorama was one of the fair’s most successful and popular attractions. Even after it ended, the exhibit remained open to the public and was constantly updated.

Today, there is an ongoing effort to update the model, with the museum asking individuals or developers to donate at least $50 for the inclusion of their building.

How to get to Flushing Meadows Corona Park

If you’re interested in visiting the park, you can take the 7 Train to Mets-Willets Point to access the northern end near Citi Field. Or take the E or F Trains to Kew Gardens – Union Turnpike for the southern end of the park.

History you can see and experience

Flushing Meadows Corona Park is undoubtedly one of New York’s most significant sites. It serves as a living time capsule, preserving the history of the World’s Fairs while providing social and cultural activities to the area’s diverse population.

People from all over the world come to experience festivals, international cuisine, sports fields, lakes, museums, theater and many of the other resources the park has to offer.

So venture out beyond the borders of Manhattan and see for yourself why millions of people make the trek to see this amazing park. It’s only one of the amazing sites there is to see in the outer boroughs.

10 Iconic NYC Foods: Where to Go and What to Order

When it comes to good food, New York City has a lot on its plate. Culinary trends ranging from the cronut — a…

New York City is a backdrop for many movies and TV shows, and park scenes have been a film favorite. While Central Park…