9 Secrets of Sainte-Chapelle Every Paris Traveler Should Know 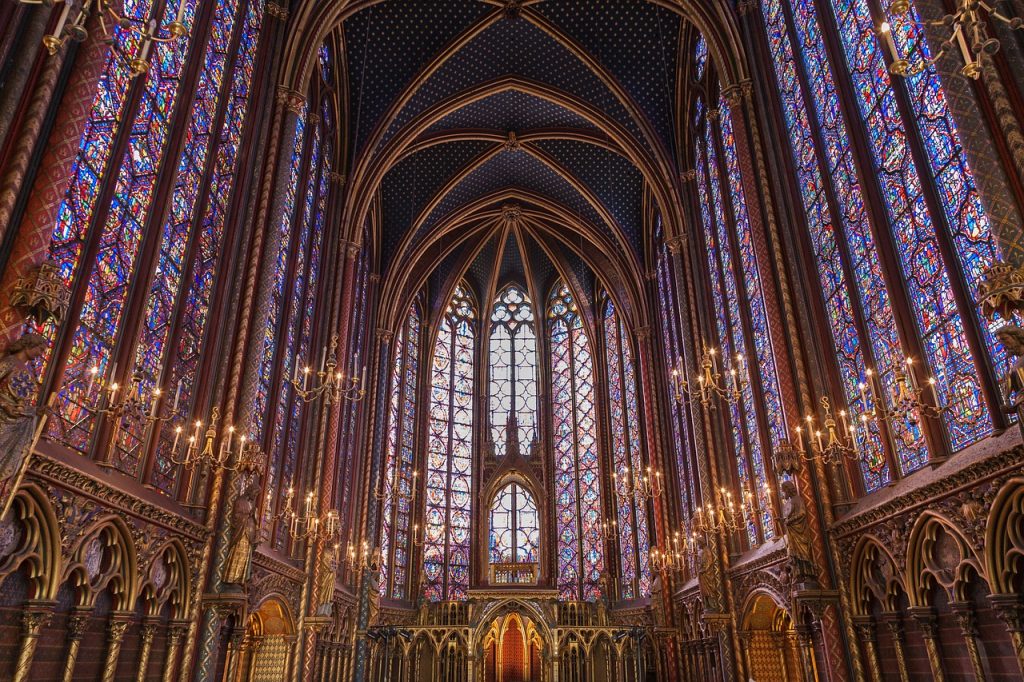 In the 1st arrondissement of Paris, in the heart of Île de la Cité, lies Sainte-Chapelle. This chapel, gleaming with light, remains a mystery for many travelers who pass by it on their way to the city’s more famous cathedral: Notre Dame.

But this unusual church, designated a world heritage site, is an architectural marvel in its own right. Within its walls you’ll find remarkable stained glass paintings and a wealth of history.

In this blog post. I have a few of the surprising secrets and facts you’ll want to know about Sainte-Chapelle before you visit. I’ll also share a few suggestions on what to see, do, and eat near this 13th century chapel.

First, a quick note for travelers about admission.

Unlike many cathedrals across Europe, Saine-Chapelle doesn’t offer free admission. It costs €11.50 for adults to visit. With the higher price comes the prestige of visiting one of the official national monuments of Paris. For those under 18, it’s free, along with EU residents between 18 and 25.

Local tip: Like many other Parisian cultural sites, Sainte-Chapelle is often free on the first Sunday of the month, although if you opt for this day, expect bigger crowds.

Now without further ado, let’s dig into those Sainte-Chapelle secrets, lore, and facts.

1. There are over a thousand stained glass windows in the chapel.

Sainte-Chapelle can overwhelm visitors when you first visit the upper chapel. It boasts 15 glass walls — each about 49 feet high — that you can easily count once you walk in. But there are many more individual windows. It feels like something of a treasure hunt looking for all of them.

In all, there are exactly 1,113 different windows, many depicting complex scenes from religious history, as we’ll learn below.

2. Each piece of stained glass has a specific meaning, and many tell stories.

Much of the stained glass at Sainte-Chapelle depicts stories from the Old and New Testaments.

Think of it this way — each colorful glass panel is made of small glass pieces, essentially piecing together some of the sacred mysteries of Christian texts.

One colorful scene shows the second plague of Egypt. You can see bright yellow and pink frogs covering the clothes of Egyptians. Yet another glasswork shows Moses parting the Red Sea. Among the New Testament scenes, you’ll find an evocative portrayal of the Passion: Jesus being flogged while on the cross.

3. Sainte-Chapelle once housed more than 20 relics.

King Louis IX, dubbed Saint Louis for his religious devotion, bought what he thought was the crown of thorns from Venetians, who held it in pawn from the emperor of Constantinople. The whole chapel was as a monument around this relic.

It’s said that the crown of thorns cost more than three times what Sainte-Chapelle itself cost — 135,000 livres versus just the 40,000 livres to construct the building.

On his quest for relics from the Passion of Christ, King Louis also tried to acquire what could be nails and pieces of wood from Christ’s crucifixion. These remained part of the chapel’s collection of treasures until they were transferred to Notre Dame. For now, the crown is being held for safekeeping at the Louvre museum.

While Sainte-Chapelle is considered a giant reliquary to house the crown of thorns, it also had a reliquary within the reliquary — ornate boxes fashioned to house the religious relics. The Holy Thorn reliquary (originally for the crown) was made around the turn of the 15th century and consists of gold, enamel, pearls, sapphires, and rubies. It’s currently at the British Museum.

Local tip: Keep an eye out during your Sainte-Chapelle visit, and you’ll spot the famous crown relic depicted in the stained glass. One of the scenes shows the moment when the crown of thorns is placed on Christ’s head.

At the height of Louis IX’s collection, there were a number of supposed relics, mainly depicting the life and crucifixion of Christ. Here are a few others:

4. Sainte-Chapelle was nearly destroyed by revolutionaries.

The chapel was nearly destroyed during the French Revolution in 1789. Its delicate exterior was damaged, most notably the spire whose fleurs-de-lis represented the French ruling class.

It underwent a bit of wear and tear even before the revolution, surviving two fires (one in 1630 and another in 1777) and one flood. Under the First Empire, the upper chapel turned into an archive warehouse, damaging the delicate stained glass windows in the process.

Almost all the relics were nearly destroyed during the French Revolution. Luckily, the prized crown of thorns survived and was taken to Notre Dame. The crown even survived the recent Notre Dame fire.

5. The famous rose window actually shows the end of the world

One of the key features of Sainte-Chapelle is the huge rose window forming what’s lauded as a “wall of light” that completely covers the chapel’s west wall.

But the story depicted in the window is much darker. The colorful window depicts the Book of Revelation — the last section of the Bible with a prophecy on the end of the current age. You can find God on his throne holding the Book of the Seven Seals and Saint John and the Seven Churches of Asia at the feet of Christ.

6. No one knows exactly how or when Sainte-Chapelle was created.

The chapel is more than 700 years old, but historians can only guess when the project broke ground. It’s said the chapel was built between 1243 and 1248. We do know it was consecrated in 1248.

Likewise, historians aren’t sure of the architect, but many believe it was a Frenchman named Pierre de Montreuil.

7. Saint-Chapelle is a marvel of Gothic architecture.

Even if you don’t go inside, Sainte-Chapelle is worth a visit just to glimpse the outside. It’s known around the world for its exemplary Gothic architecture, from its intricate vaults to the façade, though you won’t find the more lavish features, like flying buttresses, that you see at Notre Dame. Its slightly more solemn exterior is what makes the richness within all the more surprising.

Local tip: If you look at the top of the exterior, you’ll find it resembles a crown. That’s thanks to the intricate Gothic façade. The pinnacle atop each buttress looks like the points on a crown.

8. You can unlock the mysteries of the stained glass windows online with an app.

There’s a new app offered by Sainte-Chapelle simply called “Sainte-Chapelle Windows.” Install it, and you can enjoy a mini-tour with an audio guide that will explain the stories behind the biblical scenes.

The app is available for Android and Apple devices online. The paid version costs about a €1 and includes all the windows, but you can see the rose window up-close for free — and there’s a lot to see just in that one detailed window.

9. You can see a show right in the chapel.

Sainte-Chapelle hosts an annual concert series where the public is invited to attend. While the music is incredible, to be sure, what’s really great about these concerts is the experience of watching the musicians perform in such a gilded and glittering setting. The tall stained glass windows rise behind the artists as their music pours out — it’s a multisensory experience you need to add to your Paris bucket list if you’re a fan of classical music.

You can purchase tickets at their on-site ticket office during the monument’s regular business hours.

What to See and Where to Eat Near Sainte-Chapelle

Of course, if you’re on Île de la Cité, the main draw here is Notre Dame. It’s just a five-minute walk on the island along the Quai du Marché Neuf. But I recommend a nice green space on the island perfect for reading, the Square du Vert Galant.

Right alongside the Sainte-Chapelle is Palais de Justice (or Palace of Justice) with its famous golden gates. Just a few steps farther is the historical Conciergerie, known as the place where Marie Antoinette was held before her execution. It’s another monument you can enter if you pay admission, but if you plan to do the Conciergerie and Sainte-Chapelle, get a combo ticket so you can save a bit of cash.

There are quite a few places to eat and drink in the area, but most are off the island. The famous Les Deux Magots brasserie is less than a 10-minute walk away. For a drink, I recommend Wine O’Clock, a cozy bar just a short stroll from Sainte-Chapelle on the Left Bank. If you want a coffee, then head over to the Right Bank to The Caféothèque of Paris.

If your time is limited in Paris to a one-day tour of the city or even just a long weekend, Sainte-Chapelle might be a place to visit from the outside. Go with a guide and you can still learn about the stories and secrets Sainte-Chapelle contains without having to get a ticket or wait in line to enter. Plus you’ll still get to do Paris highlights like the Eiffel Tower and the Seine.

But if you love historic churches, stained glass, or one-of-a-kind attractions, Sainte-Chapelle is worth fitting into your Paris itinerary. When you’re there, it feel like you’re standing inside a jewel box, and there’s no other cathedral in the world quite like it.