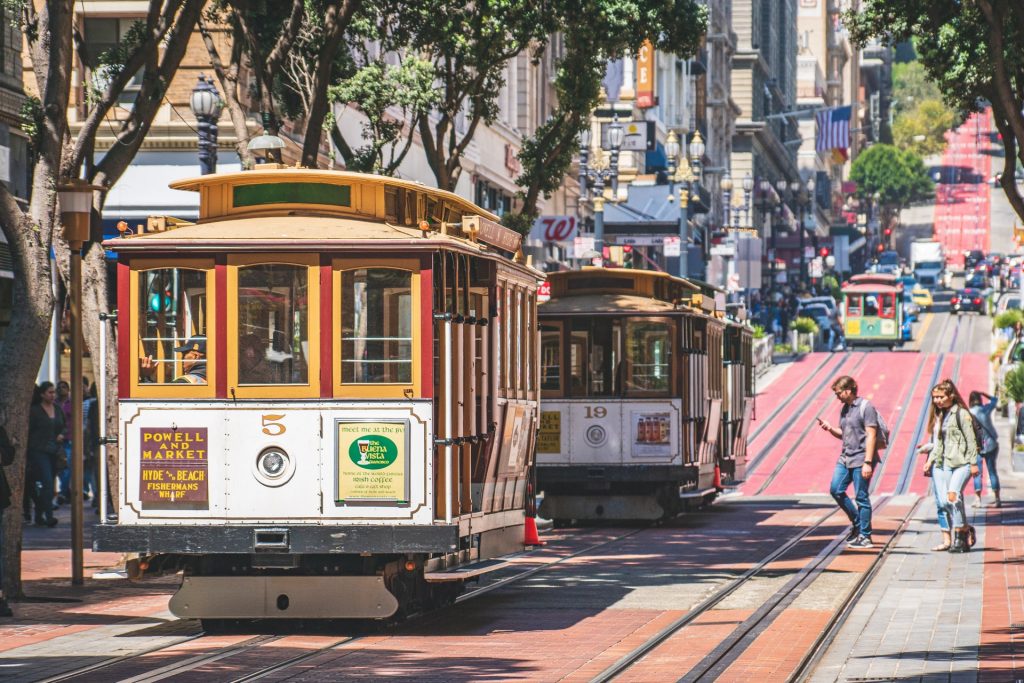 In 1964, the cable cars were named the first moving National Historic Landmark. The cars are still used by local commuters today, but many of their passengers now are tourists. As a historic sight you can enjoy while heading to your next destination at the same time, they made a fun add-on to your tour of San Francisco.

Read on to learn more about these famous cable cars and what you need to know before you ride one.

The cable cars started their run in San Francisco in 1873.

A man by the name of Andrew Hallidie came up with the idea a few years earlier (in 1869) and later patented the system. In its heyday, there were 23 lines of cable cars built in San Francisco. But a couple of decades later, electric streetcars came onto the scene.

For a while, it looked like the days of the San Francisco cable car were numbered.

For one, electric streetcars were thought to be more efficient to build and run, so there was pressure to replace the cable cars with the newer streetcars. Then the 1906 San Francisco earthquake ended up destroying many of the cable cars, and in the race to rebuild the city, several of the lines were replaced with streetcars.

Thankfully, a public campaign saved some of the cable cars by showing that it’s not just about operational costs. The cable cars are a draw for tourism, campaigners argued. And they were right. Today, these cars host around 7.5 million passengers a year, and they’re one of the icons of the city.

Where to Catch the Cable Cars

Here’s a breakdown of each line and the attractions you can visit via each line.

Two of the lines start off at Powell Station (on Market Street) and go towards Fisherman’s Wharf. Both lines also pass near Chinatown. The Powell/Hyde line ends at the Hyde Street and Beach Street intersection on the west side of the wharf.

Before getting there, though, this line can also drop you off at the top of Lombard Street, known as the crookedest street in the world. Your stop will be at the intersection of Hyde Street and Lombard Street. This one one steep block of Lombard Street has eight hairpin turns. It’s a popular stop on our tour of San Francisco highlights.

The second line is the Powell/Mason line that also starts from Powell Station, but it goes to the intersection of Taylor Street and Bay Street on the east side of Fisherman’s Wharf. This route branches off from the Powell/Hyde line around Chinatown.

Be sure to explore the wharf while you’re here, home to the famous clam-chowders-in-a-bread-bowl and Boudin Bakery. (If pastries are your thing, check out our list of multicultural bakeries in SF — Boudin Bakery is, of course, on the list.) And don’t forget to walk to Pier 39 to visit the seals, too.

There’s a lot more to see here than just Pier 39 and Boudin’s, though. We can show you the highlights (plus the insider tips and history) on our guided walking tour of Fisherman’s Wharf.

At the Embarcadero, you can visit the Ferry Building and its various food vendors. There is also a farmers market behind the Ferry Building that is held three days a week (Tuesdays, Thursdays, and Saturdays). The rest of the line travels through a quieter part of San Francisco instead of the busier Powell Street lines that run through Union Square.

Questions Before You Climb Aboard

How much is a cable car ride in San Francisco?

A single cable car ride is $8 per person, so it’s more expensive than a regular ride on the Muni bus.

Local tip: If you plan on traveling via public transit all day, you can get a Visitor Passport, available for 1, 3 or 7 days. The Visitor Passport is good for unlimited rides on Muni buses, Muni Metro, streetcars, and cable cars. However, it’s not valid on BART as that’s not part of Muni.

How do the cable cars work?

What’s unique about the cable cars are that the cars themselves have no engine or motor. The cars are pulled by cables using wheels that sit under the tracks.

If you’re interested in knowing more about how the cable cars work and their history, check out the Cable Car Museum. The museum is free to visit, and you can — appropriately — reach it by riding the Powell/Mason cable car line.

What is the difference between a streetcar and a cable car?

Streetcars, which replaced most of the cable cars after the 1906 earthquake, are run using electric motors on board the car. The motors draw power from an overhead wire via a trolley pole. You can easily spot them around the city by looking for these overhead wires.

With the extensive public transit system in San Francisco, driving isn’t necessary. And parking in the city’s busy areas can get expensive. Why not take a ride in a historic icon to travel to your next sightseeing destination? While the cable cars only cover the eastern part of the city, they still will get you to a number of the city’s most popular spots.

Looking for more classic SF sights? Check out our lineup of the city’s best historic landmarks.