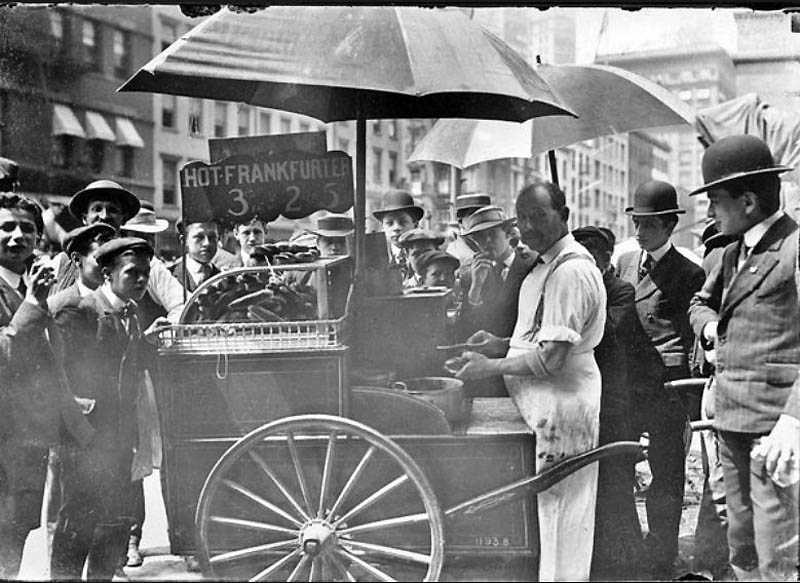 The Hot Dog Cart. If there’s such a thing as a New York Culinary Icon then the Hot Dog Cart is certainly under consideration. This quintessential street meat is a ubiquitous Big Apple treat. But how did this humble sausage become a NYC staple?

Food vendors have a long and storied history. The hot dog cart can trace it’s origins back to Ancient Greece. Industrious citizens hawking snack from mobile wagons appear in Homer’s Odyssey. Aristophanes’ play “The Knights” follows one such vendor as he’s elected a leader of the city.

But how do these red hot treats make it from Athens to Astoria? There’s some disagreement on the subject, but any way you slice it, it’s an interesting story. 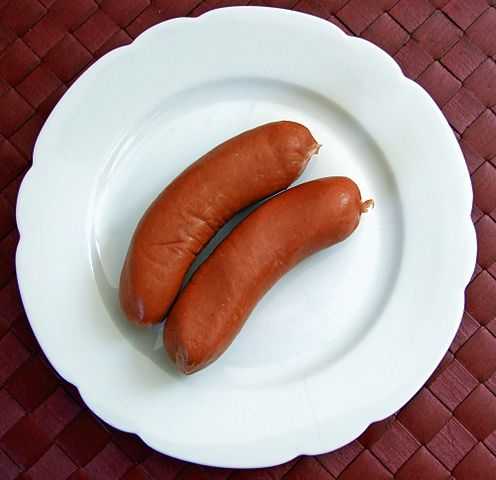 The sausage was first discovered in Roman times, but the Germans elevated the craft to an artform. The long, thin sausage with the traditional red coloring may have been developed 500 years ago in the german city of Frankfurt. That’s just a few years before Columbus set sail. There’s some disagreement on this point, and Vienna, Austria also claims the right. The city is also known as Wien, and the citizens point to the nickname “wiener” as evidence of their creation.

When the sausages first arrived in the States, generations later, they were known as Red-Hot Dachshund Sausages. A mouthful in more than one way!

Get Your Red Hots Here

The introduction the the US is another part of the story shrouded in mystery. In the 1860s, rumors persisted of a German immigrant slinging sausages, as well as milk rolls and sauerkraut, from a cart in the NYC Bowery. A few years later, a baker named Charles Feltman would open the first Coney Island stand, selling 3,600 dachshund sausages in his first year.

1893 was a big year for the Hot Dog. In Chicago, the sausages were a hit at the Colombian Exposition, a World’s Fair. Cheap, quick, and easy to eat, the tasty sausages were America’s first fast food. They also became standard fare at baseball parks around the same time. A few years later, a New York Journal cartoonist, Tad Dorgan, sketched a quick cartoon of the barking vendors shouting, “Get Your Red Hot Dachshunds Here!” Unable to spell Dachshunds, he shortened it to “hot dog” and a new term was coined.

The first mobile concession stands were known as “dog wagons.” These carts often sold hot dogs outside of student dorms in the mid 1890s. They relied on a home base, however, where the food was prepared.

In 1926, an inventor named Frances E. Coffey drew up the plans for the first truly independent hot dog cart. His design featured a cooking plate, a steam table, and even an ice box. Coffey’s design is the basis for the modern cart, and would soon be manufactured around the world.

But like most of hot dog cart history, there’s a bit of mystery about this moment. Just a year earlier, another inventor patented a similar design, also featuring a mobile grill. This entire contraption was perched, rather precariously, atop a bicycle. It would take a cook with nerves of steel to prep his wares while pedaling his hot dog cart through a busy New York intersection.

In 1915, a young man named Nathan Handwerker was slicing hot dog buns on Coney Island for $11 a week. He lived on his wares and slept on the floor until he saved $300, enough to open his own hot dog stand. Undercutting his former boss, his $0.05 hot dogs soon became Nathan’s Famous. By the time of the Great Depression, Nathan’s affordable dogs had spread across the nation. President Franklin Roosevelt famously served hot dogs to the visiting George VI, the King of England. How better to crown the hot dog America’s favorite food?

Today, hot dog carts are a ubiquitous sight on New York City streets. While hard numbers are difficult to come by, the National Hot Dog and Sausage Council estimates that New Yorkers spend over $120 million dollars a year on franks. Nationwide, over 7 billion wieners are consumed between Memorial Day and Labor Day, also known as Hot Dog season.

Anyway you slice it, hot dog carts should be part of any visit to the Big Apple. New Yorkers like to eat on the go, and we love our street meat. Check out our favorite Hot Dogs here and come snack with us on the sidewalk on our New York in Day Tour, only from New York Tour1.