The Palace of Fine Arts: San Francisco’s Most Romantic Park 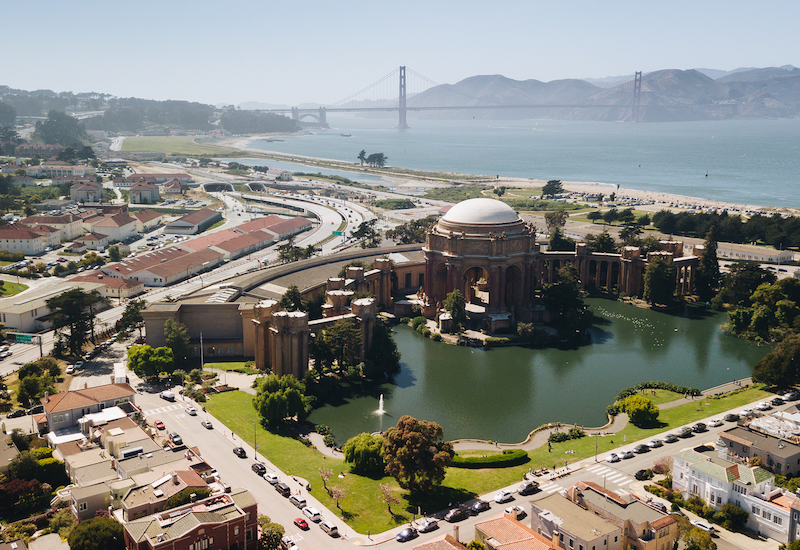 The Palace of Fine Arts is a San Francisco landmark that looks like a page from a fairytale. Thanks to its unusual architecture — Roman columns and pale-pink hues — this place seems more like something you’d find in a historic corner of Europe than the heart of modern San Francisco.

But here it is in all its beauty: a popular event venue, tourist site, and relic of history. Below, I’ll share what to see when you go and what makes the Palace of Fine Arts truly San Francisco’s most romantic outdoor setting.

Architecture and History: The Making of a Palace

The year was 1915. World War I had just started. An earthquake had devastated San Francisco less than a decade earlier. When the city was chosen as the location for the Panama Pacific International Exposition, San Francisco leaders wanted to create a lasting symbol of beauty while encouraging trade.

A California architect who studied at the École des Beaux-Arts in Paris, Bernard Maybeck was chosen to create the Palace of Fine Arts. The goal of his design was to evoke solemn reflection, inspired by the ruins of the Roman Empire.

What to See at the Palace of Fine Arts

Only a few structures from the 1915 exhibition remain, and the palace is the largest of these.

When you visit, enjoy the outdoors of this park-like setting. You can see Australian eucalyptus trees and spot swans, geese, and turtles as you stroll. The pergola located close to the rotunda and near the lagoon is also a popular site with greenery and floral arrangements that match the surrounding lush landscape.

The Instagram-worthy beauty is really about the architecture, though. Admire the colonnades, grand rotunda, and sculptures of weeping women on top of the colonnade. Reflections in the artificial lagoon make this free attraction even more romantic. Go at sunset or sunrise (as show in the lagoon photo above) for spectacular views and photos.

Events at the Palace

Along with private events, the Palace of Fine Arts periodically hosts events open to the public. These include festivals (like the California Vegetarian Food Festival), special exhibits, and more.

If you’re looking for an evening out, the Palace of Fine Arts Theater offers a full lineup of concerts, comedy, dance, and other performing arts. There’s no on-site box office for shows, so be sure to get your tickets in advance online. Check their event calendar to see what’s coming up.

Nearby Attractions and Getting Around

The Palace of Fine Arts is near many other popular downtown destinations. The venue is only a half-mile from San Francisco’s Chestnut Street and Union Street, home to several bars and restaurants. For tourists looking to walk or just enjoy the outdoors, the waterfront is easily accessible, too. From there, you can even get a glimpse of the infamous Alcatraz.

Better yet, the palace sits right on the edge of the Presidio National Park. This 1,480-acre greenspace in San Francisco includes The Walt Disney Family Museum, a fountain with a sculpture of Yoda, hiking trails and beautiful views of the Golden Gate Bridge.

There’s ample parking near the palace, which makes it convenient if you’re driving here. If you don’t have your own transportation, traveling around San Francisco is typically pretty easy. There’s the municipal transportation system, known as the Muni, with bus and streetcar lines, and the Bay Area Rapid Transit commuter rail.

But I believe San Francisco is a city for walkers. The compact streets pack in a lot within a few blocks. For example, the Lyon Street Steps, outdoor stairs popular with art enthusiasts and fitness buffs, are less than a mile’s walk from the Palace of Fine Arts.

Frequently Asked Questions for Your Visit to San Francisco’s Palace

Is the Palace of Fine Arts free?

Yes. The park surrounding the Palace of Fine Arts is free to visit, making this an inexpensive addition to your tour of San Francisco. Certain exhibits and shows at the location may have a fee.

How do I get to the Palace of Fine Arts?

The main entrance is located on Baker Street and is inside the Marina District, at the eastern edge of the Presidio. It’s close to other tourist attractions — just under three miles west of Fisherman’s Wharf and three miles northwest of Union Square. Many buses run frequently to and from this part of town.

When is the Palace of Fine Arts open?

The Palace of Fine Arts event venue is open Tuesday through Sunday, 10 a.m.-5 p.m. However, the park featuring the architecture, lagoon, and wildlife — in other words, the romantic setting you’re there to see — is open daily to the public.

A Palace Worthy of San Francisco

The Palace of Fine Arts is a must for anyone who enjoys beautiful landmarks. It’s not one of San Francisco’s historic landmarks where you’ll spend a ton of time — it’s mainly a park with striking architecture. But it’s such an icon of the city, an enduring symbol of romance and history, that it’s a must when you’re in the area.

So whether you just want to snap a photo for Instagram or plan to picnic and make an afternoon of it, add San Francisco’s palace to your bucket list. It’s a quick stop and centrally located, so it’s an easy, free attraction to fit into any trip.