Meet Emma Lazarus: The Woman Who Crafted the Legendary Poem of Statue of Liberty 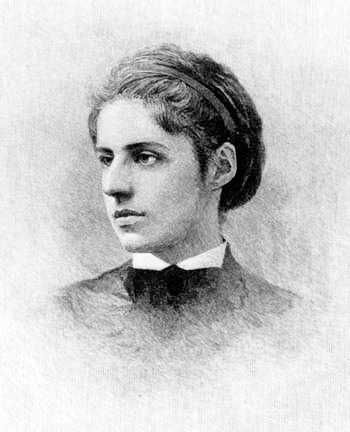 “Give me your tired, your poor, your huddled masses yearning to breathe free.” These are the powerful words that Emma Lazarus wrote while envisioning the majesty that would become the Statue of Liberty. Her sonnet, The New Colossus, is a world renowned ode to one of the world’s most famous monuments. While many people may know the poem, not many know much about the woman behind it: Emma Lazarus.

1. Emma was a native New Yorker.

Born into a Sephardic Jewish family, Emma Lazarus had 6 brothers and sisters. Their home was located on West 10th Street, and is today included in a map of Women’s Rights Historic Sites. Her family had both German and Portuguese ancestry. However, neither Emma nor her parents were immigrants. Most of her family had actually been residents of New York for 50-100 years. Emma gained her love of poetry from her great-great grandmother, who was also a resident New Yorker and a poet. For her life and her work she was honored by the Office of the Manhattan Borough President, named a Women’s History Month Honoree and was inducted into the National Women’s Hall of Fame.

2. The poem was written to raise funds for the pedestal.

In 1883, Emma wanted to contribute her passion to the fundraising for the building of the pedestal of the Statue of Liberty. She wrote a sonnet entitled The New Colossus and donated it to an auction in order to hopefully motivate people to donate. The title of the poem comes from the inspiration for the Statue of Liberty- The Colossus of Rhodes. The lines of her sonnet were later inscribed on a bronze plaque which was placed in the pedestal of the Statue of Liberty in 1903. The last stanza of her sonnet was also set to song by Ellis Island immigrant Irving Berlin, for the 1949 musical Miss Liberty.

3. She never got to see the Statue of Liberty in person.

Unfortunately, she passed away shortly after the Statue was completed, and never got to personally make the trip to visit and admire the amazing monument she had written so passionately about. After a two year trip to Europe, she returned to New York City devastatingly ill. It is said that she was likely diagnosed with Hodgkin’s lymphoma. She died two months after her return, on November 19, 1887. But, even after her passing, she lives on in the beautiful words that she wrote.

4. Her Jewish ancestry inspired her to advocate on behalf of Jewish refugees.

Emma became very interested in her Jewish ancestry after turning 30. In that time period, thousands of impoverished Ashkenazi Jews were emigrating from Russia to New York following the anti-Semitic violence that followed the assassination of Tsar Alexander II. She wrote many articles about the subject, as well as a collection of poems entitled Song of a Semite. Her work helped to establish the Hebrew Technical Institute in New York. Their mission was to provide assistance to Jewish immigrants in order to help them become self-supporting. In honor of her efforts, The Museum of Jewish Heritage in New York City featured an Emma Lazarus exhibition in 2012.

5. Many of her other works were also published, not just poems.

From as early on as her childhood, Emma studied literature and several other languages. A huge admirer of American political economist Henry George, she published a poem in the New York Times that was named after his book. Besides The New Colossus, she wrote many of her own poems and also edited adaptions of German poems. Her work also includes a novel. Towards the end of her life she also wrote two plays. The first, The Spagnoletto, was a tragic verse drama about Jusepe de Ribera. The second, A Dance to Death, inspired by a German short story about the burning of Jewish people during the Black Death.