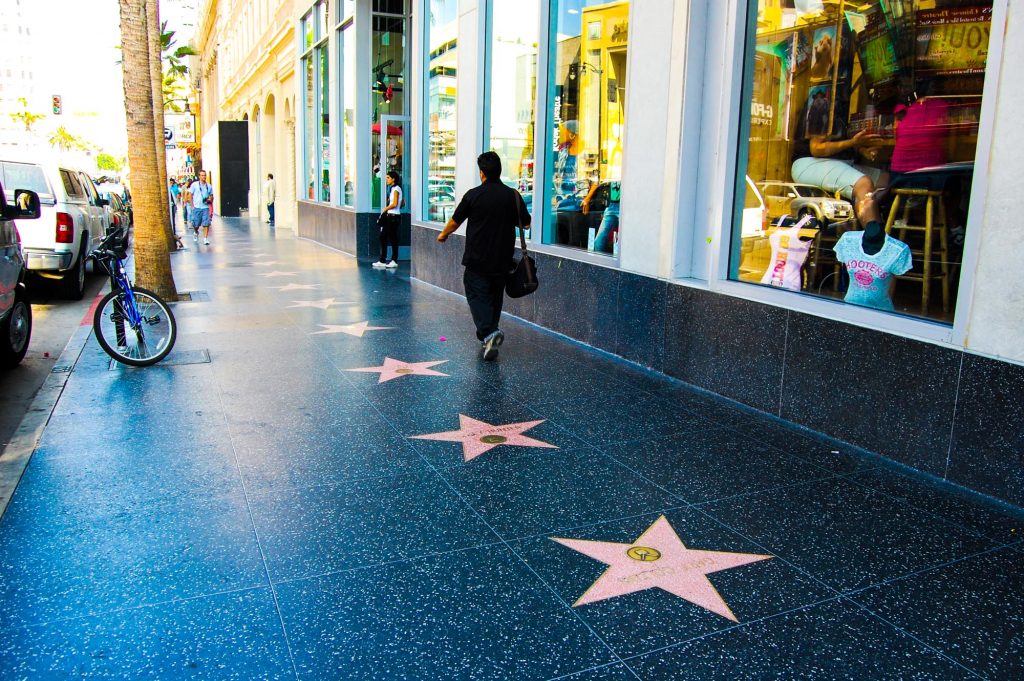 Many of the tourists that we see visiting LA want to pay homage to their favorite celebrities, and to do that they head to Hollywood. There are two spots here that honor celebrities who have truly made an impact: the Hollywood Walk of Fame and the forecourt of the Grauman’s Chinese Theatre (now rebranded as TCL Chinese Theatre — more on that later).

But don’t confuse the two. The Walk of Fame is an installation of over 2,600 stars along Hollywood Boulevard and beyond. The Chinese Theatre, meanwhile, also sits on Hollywood Boulevard, is known for the celebrity handprints and footprints on the cement of the theatre’s forecourt.

There’s no reason to choose one over the other, though. They’re conveniently located nearby each other so you can do both at once.

Curious to know more? Below, I’ll talk a bit about the history of each one and what to know before you visit.

Hollywood and the Walk of Fame

The idea for the Hollywood Walk of Fame came about in 1953 by the volunteer president of the Hollywood Chamber of Commerce, but the plans weren’t finalized until 1956. And it took another two years to make the dream a reality.

In August of 1958, the first eight stars were unveiled. The full Walk of Fame, however, wasn’t completed till 1961 with the installation of an additional 1,550 stars.

Fun fact: The stars on the Walk of Fame are spaced 6 feet apart, so they’re perfect markers for social distancing.

Originally started on Hollywood Boulevard, the Walk of Fame has now grown to 15 blocks — that’s 1.3 miles, if you’re counting — of this boulevard plus an extra three blocks on Vine Street. While searching for the stars of your favorite celebrities, you can get a lot of fun people-watching in with all the tourists taking selfies and street performers in superhero costumes ready to pose with the tourists.

There are plenty of other sites on Hollywood Boulevard to enjoy as well, from Madame Tussauds Hollywood to the Egyptian-themed American Cinematheque. Plus, it’s free to walk on the boulevard and simply enjoy the sights outside.

Travel tip: If you want to snap a photo with one of the street performers in costume, go right ahead, but know that they’ll appreciate a tip for the memory-making experience.

Getting a Star on the Hollywood Walk of Fame

While anyone can be nominated for a star, the nominees have to be approved by a special selection committee. It’s a rigorous process. Once the nomination is selected, there’s a hefty $50,000 fee that goes towards installing the star and maintaining the Walk of Fame.

The stars are made of terrazzo flooring and brass with the names engraved in gold letters — pretty fancy. Under each name is a symbol encircled in gold. This symbol indicates the category for which the celebrity is being honored.

There are five categories acknowledged on the Walk of Fame:

Who’s Featured on the Walk of Fame

There are some notable stars that were a stretch from the five categories listed above. For example, the boxer Muhammad Ali got a star in the “live performance” category. His star is also the only one mounted on the wall of the Dolby Theatre instead of on the ground, since he requested that his name, which he shares with the Prophet Muhammad, not be walked upon.

Who are the most famous stars on the Walk of Fame? That’s subjective, of course, but there are a few stars that seem to be consistently popular.

This isn’t a comprehensive list, but here are some stars you may want to check out when you visit:

Quick tip: Looking to find more stars? You can take the guesswork out of finding them by using the online Star Directory.

Attending a Star Ceremony on the Walk of Fame

If you ever want to be a part of the star ceremony, when the star is dedicated with the honored celebrity present, then you can. Best of all, it’s free to attend.

Keep an eye out on the Walk of Fame’s website for the announcement of upcoming ceremonies. On average, there are about 24 ceremonies held each year and they are announced 10 days before the date.

Not all of each year’s star recipients will have ceremonies that year, though. The recipient has two years to schedule the date.

Just east of Bruce Lee’s star on the Walk of Fame is Grauman’s Chinese Theatre, another popular destination for Hollywood-loving tourists. This famous theater opened way back in 1927 and has seen its fair share of stars (real-live celebrities, rather than the walkway markers) for movie premieres and more over the years.

Nowadays, you’ll often hear it called the TCL Chinese Theater. The new name comes from a Chinese manufacturing company that has partnered with the theater, beginning in 2013, to give the venue some much-needed upgrades.

In case you’re wondering how it got its original name, the theatre was partly owned and built by Sid Grauman (who has his own Walk of Fame star in the film category). The Exotic Revival architecture of this movie palace and its over-the-top decor quickly made it one of LA’s most-recognized landmarks. Grauman worked with the architect to develop the theatre in Chinese-style design and even imported artifacts from China for the decor, hence the name.

Celebrity Hand and Footprints at the TCL Chinese Theatre

The Grauman’s Chinese Theatre has its own tributes to the stars on their grounds. Handprints and footprints of honored celebrities are cemented in the forecourt of the theater, nicknamed the “Forecourt of the Stars.”

How it all got started was a bit of an accident. The first celebrity footprint was that of silent film star Norma Talmadge, added in 1927 when she accidentally stepped out on the wet cement. That gave Grauman an idea that later became the theatre’s most famous feature.

Did you know? This wasn’t just for human celebrities. There are also prints of R2-D2’s wheels and C-3PO’s robot feet.

Over the years, there have been some movie studio-sponsored handprint or footprint ceremonies for promotional purposes, too. Some of these prints never made it to the forecourt, though — after all, there’s limited space. For example, Alvin and the Chipmunks imprinted their “paws” in wet cement to promote the movie, but those prints were never actually installed.

Most tourists come for the handprints outside of the theatre, but if you’re curious about the interior, you can either go to a movie or take a tour. The tour is 30 minutes long and goes through the history of the cinema paired with stories about theaters and movie premieres that took place in the theater.

You may want to consider watching a movie here, though. In addition to the regular movie theaters, the Chinese Theatre has a large IMAX auditorium and an MX4D immersive theater. In the MX4D theatre, they can sync the show with effects like moving seats, water sprays, fog, neck ticklers, and more — much like the 4D experiences at theme parks.

Local tip: If you’re opting for a regular movie instead of IMAX or MX4D, try to get a ticket to a showing in the main auditorium so you can really take in the glamorous decor of Old Hollywood. The other auditoriums look much like regular movie auditoriums, though you can still enjoy the interior of the main lobby.

So which should you see? Both the Walk of Fame and the Chinese Theatre’s Forecourt of the Stars are must-visit spots for movie lovers — especially if you’re visiting Hollywood for the first time. And there are plenty of great photo opportunities at each destination.

Of course, if you just want to see your favorite star’s name or prints on the ground and snap a photo, that’s fairly easy to do. But if you really want to get a sense of the history and magic here (and maybe a little Hollywood gossip, too), visit with someone who can walk you through the stars.

We’re here to help. Hollywood Boulevard is a much-loved stop on our highlights tour of LA. Our guide can tell you all about this incredible street, from the life-size Oscar statues near the TCL Chinese Theatre to the Dolby Theatre where the real Oscars are held.

Don’t be shy about asking for a photo, either. This is Hollywood! Our tour guide is more than happy to snap pictures for you or your group. For you serious star-lovers, we can always customize a trip for your private group, too.

However you choose to visit, Hollywood Boulevard is a spot you shouldn’t miss while you’re here. More than 10 million people come here every year, making it one of LA’s top attractions — come see what it’s all about (and don’t forget your camera)!

Now that you know the difference between those two destinations, you know you don’t have to choose between them. They’re both free and easy to check out, so why not search for the stars while you also take in the hustle and bustle in the heart of Hollywood? It’s the only time we recommend keeping your head down while you walk.

For more movie-related fun, you may want to set aside a day to visit Universal Studios Hollywood. My insider guide covers what to see when you go and how to make the most of your trip.