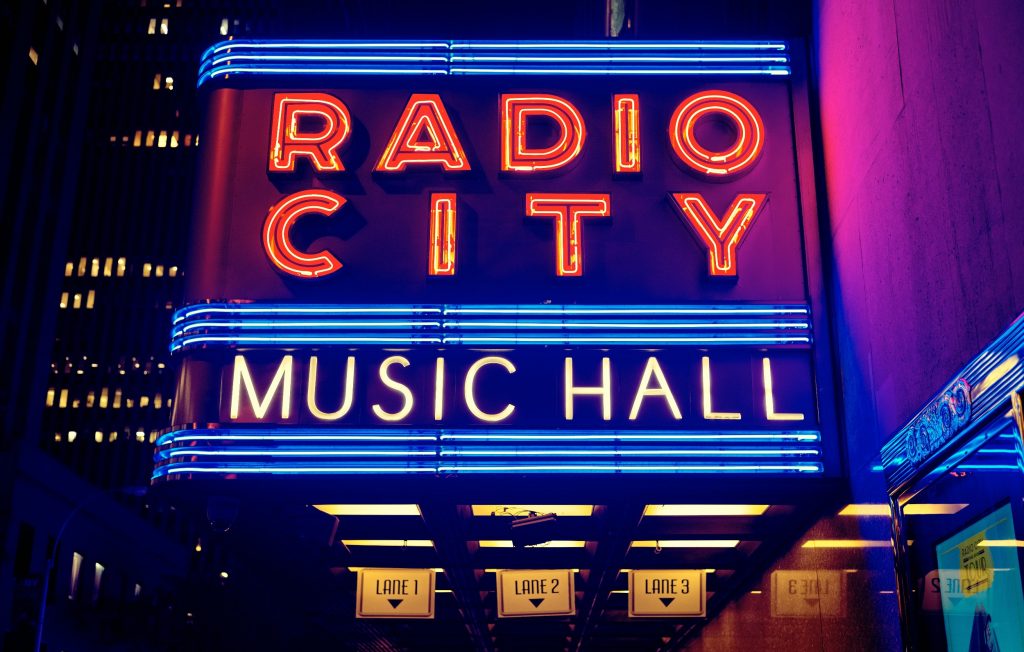 What would you do if the stock market crashed and you were stuck with a $91 million lease? If you’re John Rockefeller, you build the biggest theater in the world.

For almost 90 years, Radio City Music Hall has dazzled New York City’s visitors with some of the best entertainment on the planet. Its more than 6,000 seats have welcomed audiences to enjoy performances that range from the most famous stand-up comedians and musicians in history to special events and even college graduations.

As an actor, I can tell you it’s every performer’s dream to one day walk on the stage. As a tour guide, I love to take groups here when we visit Rockefeller Center because it’s the perfect place to showcase the music hall’s contributions to the arts.

Read on for my tips on how to experience Radio City Music Hall — the “Showplace of the Nation” — plus how you can meet a Rockette.

A Rocky Start: The Great Depression

Radio City Music Hall is part of the larger complex known as Rockefeller Center. The center is named after the ubiquitous (in New York, at least) philanthropist and heir to the Standard Oil fortune, John D. Rockefeller, Jr.

At the turn of the 20th century, this area of midtown was known as “the speakeasy belt,” and there wasn’t a lot to see. Rockefeller had a vision to develop it, but unfortunately the economy had other plans. In 1929, the stock market crashed, ushering in the Great Depression. Though the site had been prepped to become the new location for the Metropolitan Opera, those plans were scrapped. For a second there, things looked bleak.

J.D. Rockefeller wasn’t going to be discouraged. He decided to push forward with the project anyway, and to make it even bigger and better than anyone could imagine. He partnered with the Radio Corporation of America (the parent company of NBC) and architect Raymond Hood to develop a city within a city, called Radio City.

The first building of the complex to be completed was Radio City Music Hall. The architecture was designed to be unlike anything the world had ever seen, with Art Deco accents on the exterior and a marquee that stretches a whole city block. The programming concept was to offer the razzlest, dazzlest entertainment conceived, at prices that everyday people could afford.

In its early days, Radio City Music Hall earned its reputation as a movie theater, featuring premiers of the original “King Kong” and screenings of more than 20 Katharine Hepburn movies.

However, the grandeur of the stage was just begging for live entertainment, leading producers to expand the repertoire to concerts, variety shows, circus acts, and special events. Just some of the illustrious shows that have graced the stage include Ray Charles, The Grateful Dead, Liberace’s final show, and five presentations of the Grammy Awards.

Although Radio City Music Hall got its start in film, it’s now considered a premier destination for live entertainment and special events. Chances are you’ve heard of the most popular two: the Radio City Rockettes and the Tony Awards.

For almost 100 years, the Radio City Rockettes have captured the hearts of audiences with unforgettable dance shows and their iconic annual Christmas Spectacular.

In the 1920s, choreographer Russell Markert had the novel idea of creating what we know today as the conventional chorus line. The aim was ultimate precision ― in fact, Rockettes have to be between 5 feet and 6 inches and 5 feet and 10.5 inches in height in order to achieve total uniformity.

What began as a line of 16 dancers has now grown to 36. Their famous high kicks have helped cement them as the darlings of NYC, especially around the holidays. They have become so iconic, in fact, that Radio City takes them on the road. The Rockettes have performed overseas to support American troops in USO shows and alongside special guests like Heidi Klum and Stephen Colbert.

Every year the Broadway community comes together to celebrate the best of American Theater in a ceremony known as the Tony Awards, named after Antoinette Perry, a leader of the American Theatre Wing. Winning a Tony is a lifelong pursuit and dream for any theater professional, signaling the pinnacle of quality and achievement in the field.

Radio City has hosted the Tonys more than 15 times. The grandeur and magnificence of the auditorium, combined with what many professionals consider to be the most technologically advanced stage in the world, are a perfect atmosphere to celebrate the magic of theater.

What You Should Know about Radio City Before You Visit

Like a lot of things in New York City, Radio City Music Hall is easy to find and navigate once you know what you’re doing. But first, you need the information. Here are answers to some of your burning Radio City questions.

Can you go inside Radio City Music Hall?

You sure can. If you’ve seen the outside on a tour of New York but are just dying to go in, I have good news: Radio City Music Hall offers 75-minute stage door tours that take you behind the scenes of the building and the stage. The tour also culminates in a meet-and-greet with a real live Rockette.

Right in the heart of Midtown, Radio City Music Hall couldn’t be more accessible. The orange B, D, F, and M trains that stop at Rockefeller Center literally run underneath the music hall and stop at the 47th–50th Street stop. It is also very close to the yellow N, R, W stop on 49th Street, and the red 1 train stop at 50th Street.

What are the best seats in Radio City Music Hall?

It sounds like a cliche, but there’s no bad seat because the theater was designed that way. Although it has three mezzanines, they are all shallow so as to not hang over the level below them. The auditorium was also built without columns, so there are no obstructed views.

There’s a reason that Radio City Music Hall has hosted more than 300 million audience members in its history. The theater is so famous that it has become a career goal for most performers, signifying a level of success and popularity that can only be measured in ticket sales. Because of that, they can attract the best talent in the world.

As part of Rockefeller Center, it has also become an important cultural touchstone and a key part of the revitalization of New York City. Whether you’re stopping in to take a tour, see a famous comedian, or watch a New York University senior walk across the stage for graduation, it should definitely be on your list of places to see on your tour of New York.