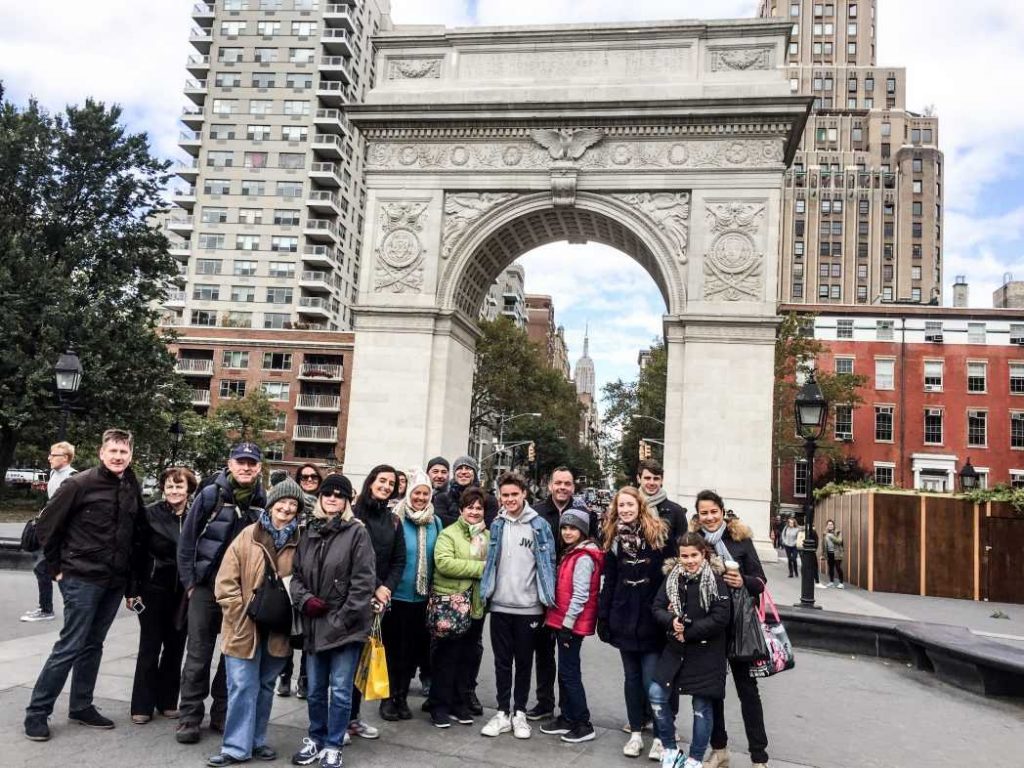 Idyllic, inspiring, and haunted? It may be one of the jewels of New York City, but the beauty of Washington Square Park hides a macabre past.

Walking through the beautifully designed pathways of Washington Square Park, it’s difficult to imagine its humble beginnings. But like many green spaces in NYC, the park began as a 6 and a half acre potter’s field, flanked by church cemeteries. Before becoming the NYU quad, Washington Square Park was the final resting place of the city’s undesirables: the destitute, the sick, and those of ill-repute.

The Scotch Presbyterian Church interred their dead just on the East side of the park, and the African Zion Methodist Church laid several hundred of their flock once they ran out of space in their crypts. Perhaps most haunting of all are the murky rumors of the hangman’s gallows that once stood on the same ground as the fountain does today.

The nation moves on… to war

With growing military interests at home and abroad, in 1827 Mayor Philip Hone transformed the potter’s field into parade grounds, granting the Seventh Regiment needed drilling space. At first, no effort was put in to move the bodies. Coffins often splintered beneath artillery wheels. This unsettling sight lead to token efforts to relocate the top layer of bodies and a thorough re-sodding of the field.

The city’s efforts to beautify the park did not go unnoticed. The city’s elite constructed lavish mansions around the park. Building first to the south and then even grander homes to the north, many of these buildings survive to this day. Eager to claim the nascent space as their own, the city’s aristocracy surrounded Washington Square. By the 1840s, the neighborhood was synonymous with genteel society.

The tensions leading to the American Civil War burned hot in antebellum New York City, and Washington Square Park would be a focal point of the ensuing conflict. A clash between egotistical actors lit the match on the powder keg of anti-immigrant mentality, leading to the Astor Place Riot. Later, in the midst of the war, troops would once again occupy Washington Square Park.  In 1863, the army quelled the draft riots threatening to consume the city.

These trials left the park a shabby shell of its former glory. In 1870, Tammany Hall Boss William Tweed organized a Department of Public Parks. They commissioned Ignaz Pilate and Montgomery Kellogg to oversee the transformation. Both men had worked closely with famed landscape architect Frederick Law Olmsted in creating Central Park. Many of the elements of the larger park, its wandering paths and organic design, would play out here.

1889 would see the centenary of the inauguration of the park’s namesake, George Washington. In an attempt to coerce the parade route through the park, local resident William Rhinelander Stewart commissioned famed architect Stanford White to create a temporary monument of plaster and wood. Stewart and White underestimated the city’s response, however, and the arch was eventually reconstructed of marble for posterity.  The figures of Washington at War and at Peace were installed on the facade more than 30 years later.

As time passed, the park would become a de facto headquarters for activism. From the protests against the Triangle Shirtwaist Fire that lead to better working conditions for all, to the fight against city planner Robert Moses, who planned to level huge sections of downtown in favor of a cross city highway, Washington Square Park has never been far from the debate.

New York’s beloved downtown park prevailed, however, and all roads leading through the space were eventually decommissioned. This opened up the space around the fountain as an open-air theater, attracting the artists and activists of the 1950s and 60s. Allen Ginsberg, Bob Dylan, Joan Baez and others could be counted amongst those holding court in the park.

The city’s decline in the 1970s and 80s took a toll on the park. A massive renovation was once again required. In 2004, stabilization work commenced on the arch. The Washington Square Park Fountain was disassembled, restored, and moved to line up with the arch. Playgrounds, performance-space, dog runs and more made this space current with a changing city.

But, history has a way of reminding us where we’ve come from. Just last year, restoration work uncovered a previously unknown burial vault in the park, containing more than 20 long-forgotten bodies. So, remember that the next time you plan a picnic, as you’ll be breaking bread with Washington Square Park’s ghosts.

See more of this incredible park and the historic neighborhood that surrounds it on our Greenwich Village Tour. Learn more secrets about New York City’s most beautiful and contentious neighborhood with one of our expert guides.