According to Andrew: LA’s Secret Staircases 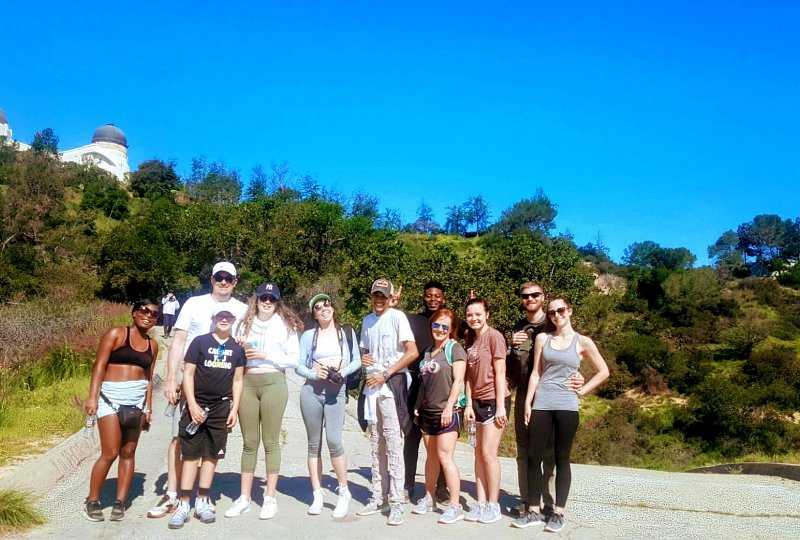 A few weeks ago, I wrote a about the various hiking trails here in LA but what if you want to hike but don’t want to stray too far from civilization? No problem, Los Angeles has a vast network of public staircases hidden all over the city. These secret staircases were first constructed in the early 20th century to assist Angelenos in making their way down from their hilltop neighborhoods to the Pacific Electric Transit System located near the busier streets. Today, all the neighborhoods have streets connecting them to the rest of the city but there was a time when these staircases were the only option for some residents to get into town. Now these walkways serve as a reminder to a time before Uber or hoverboards when people had to get around using their own two feet. The staircases vary in intensity with some as short as 101 steps to some as long as 529!

So I decided to go check out the biggest set of secret stairs, the Murphy Ranch Stairs in the Pacific Palisades. The instructions I gathered said to follow the paved path past the YELLOW GATE approximately a quarter mile off the residential street. Soon the first set of stairs will come up on the left leading down into the valley lined with various graffiti covered ruins of the ranch’s past. At the bottom of the first set, the paved pathway will lead you to the second set of stairs ascending back up to the paved road. So, the two sets basically form a loop through the property. A wonderful cardio challenge!

I’ll be honest… I got a little lost but by the end of my hike I found out where I went wrong. In my defense, there are a few sets of WOODEN STAIRCASES trailing off down the valley which I mistook for the SECRET STAIRS; unless you wish to take a much more rugged hike, DO NOT climb down the wooden stairs! The path I chose was less traveled but still had signs of recent activity. The stairs ended halfway down the valley at the head of a graffiti lined trail and I could hear a running water of a stream below. The creek at the bottom is filled with life! I lost some time just marveling the bright orange salamanders swimming in the swampy water and brilliant blue jays swooping through the canopy. I followed the trail along the creek, scanning for any sign of another staircase. Along the path are a few ruined structures covered in graffiti.

Murphy Ranch was home to Nazi sympathizers during WWII. After the attack at Pearl Harbor, US troops raided the ranch which had over 50 occupants at the time. By the 1990s, most of the larger structures were demolished, but a few still remain. The land is now managed by the city of LA which is why the public is allowed on the property to hike these trails and stairs. The history of the ranch did creep me out and it only got worse when I realized that I went the wrong way but I did eventually find a paved path which led me to the stairs as well as peace of mind. These CEMENT STAIRS were the stairs I was looking for and they led up to the decaying water tank that serviced the ranch. I nearly kissed the pavement when I reached the street that led back to civilization. On my way back to the entrance, I passed the other flight of stairs and the YELLOW GATE. At this point, I facepalmed… the WOODEN STAIRS I descended were just around the bend. That’s what I get for being impatient but all in all, I’m glad I got to explore a part of the property that is less traveled.

If you want to learn more about the history and where to find these staircases, check out the book Secret Stairs: A Walking Guide to the Historic Staircases of Los Angeles by Charles Fleming available on Amazon. HOWEVER, we at LA Tour 1 even take our guests on a portion of the PROSPECT STAIRS during our hiking tour of Griffith Park & Los Feliz and if you book a private tour with us, we can take you to some of these staircases as part of our trip around this iconic city!