In the corner of the district, on the edge of the 13th arrondissement right where it bumps up against the 14th arrondissement, just around a few corners from Parc Montsouris, lies a sweet little hidden micro-neighborhood where the streets are named after flowers.

And for good reason.

Known as La Cité Florale, this small block is like a micro-village paved with bumpy brick walks and lined by charming homes with vine-climbed walls draped with those rampant lush, green vines that tickle the top of your head as you pass by.

Some of the cozy houses are made of brick, others of sand-colored stone. Most feature wrought-iron window railings and front doors and a number of them have installed trellises to train ivy. Wisteria and vines to climb upwards toward the sky.

The citizens of this tiny neighborhood treasure have planted a variety of flora. Climbing roses, wisteria, ivy, geraniums, lilacs and a number of ornamental trees create an oasis in the city.

It’s really a pocket-sized block and there are only a few handfuls of residences here but they’re all full of genuine French charm and the neighborhood feels like it was transported to Paris from a small countryside village.

The neighborhood draws some sightseers, mostly locals from inside the city, though a few savvy travelers have caught wind of this sweet spot and venture out to the Paris “suburbs” to enjoy a stroll through Butte aux Caille and the 13th arrondissement, which has become a hip neighborhood recently.

La Cité Florale was built in the mid-1920s. Early in the century, a defunct and now possibly underground river flowed through the area. Before it disappeared, building in the area was tricky due to flooding and land-instability. These houses remain from a time where houses were often destroyed by water damage and catastrophic terrain failure.

While walking there recently, we rounded Rue des Orchidées and, all of a sudden, heard what sounded like the sidewalk cracking open. Having lived in California for a number of years, I spun around wide-eyed, anticipating the inevitable rocking and rolling of the ground. After a moment or two, I felt droplets of water on my legs and realized that the cracking sound was actually the sound of a heavy stream of water hitting the dry cement sidewalk from someone watering their second-floor window box geraniums. 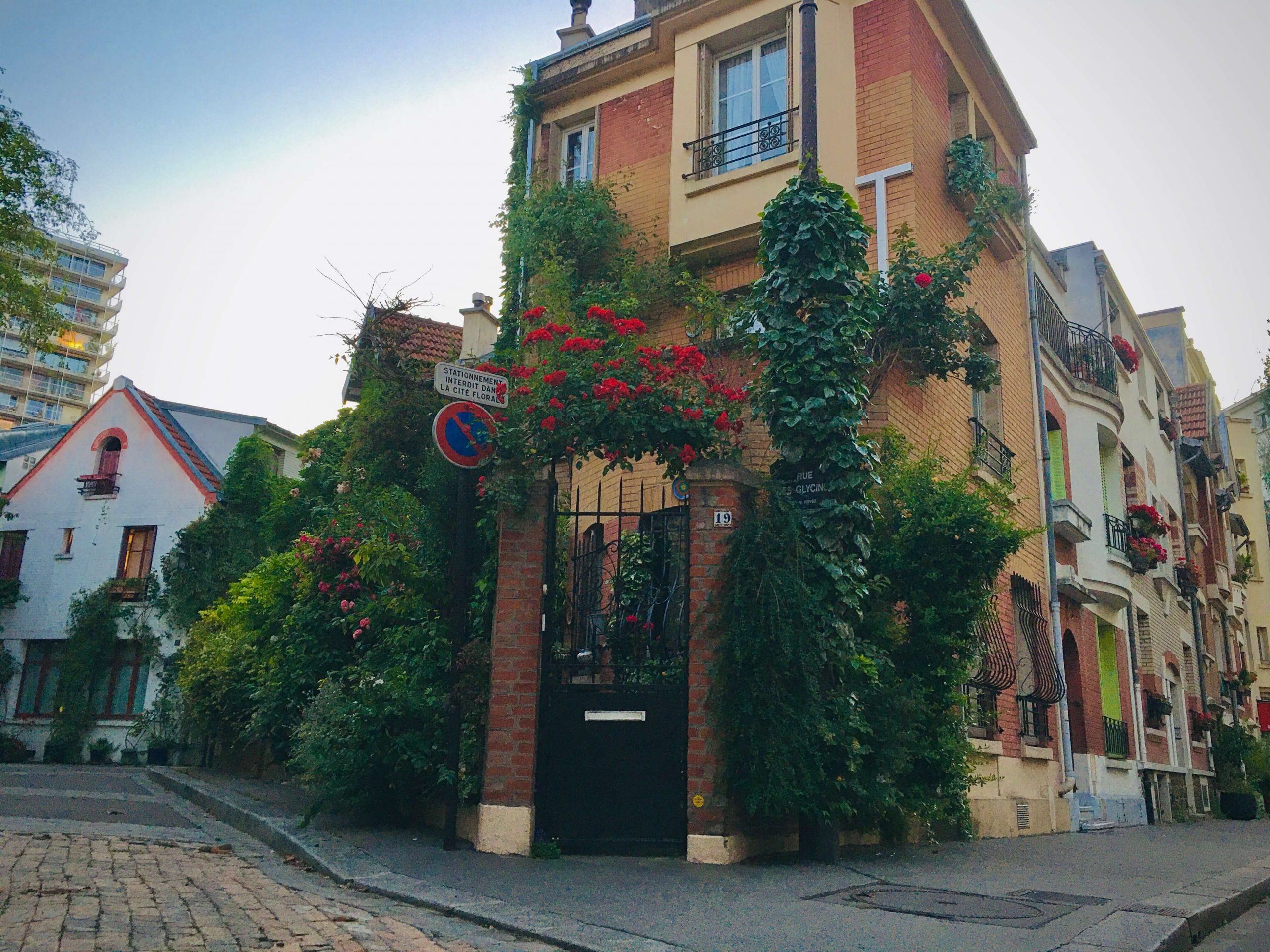 There are a number of metro stations (Place d’Italie, Tolbiac) within a relatively short distance as well as the RER Station Cité Universitaire that stops right at Parc Montsouris.

If you happen to find yourself in the trendy 13ème and want to experience some verdant solitude amongst the hubbub of Paris’ high-energy heart, this is the place to go.

Local tip: Tread quietly so as not to disturb the denizens of this quaint village. Those that live in this little Parisian gem of a neighborhood often post notices to remind gawkers that it is a private area, so remember, admire from a distance.

But if you go, you’ll be greeted with beautiful aromas of jasmine and wisteria and welcomed to step back into time.