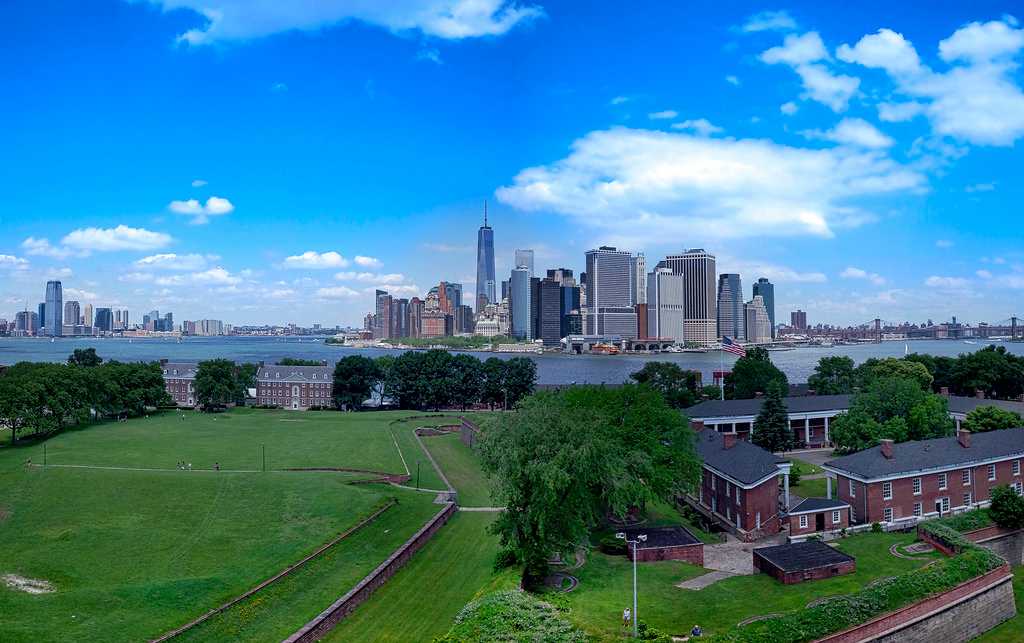 Officially recognized as the birthplace of the state of New York, Governor’s Island has arguably more history than any other street, neighborhood or borough in the city. Today it is home to an ever-evolving park and National Historic Monument but remains one of the best kept secrets that the city has to offer.

The original natives of Manhattan- the Lenape- named the island Paggank (“nut island”) in reference to the huge supply of chestnut and oak trees. It was later renamed Nutten Island by Dutch explorer Adriaen Block. The name Governor’s Island, made official in 1784, comes from the British colonial era, when the island was used exclusively by the city’s royal governors.

Italian explorer Giovanni da Verrazzano was the first European to discover the existence of Paggank island. Exactly 100 years later, the island became the official landing place of the first ever settlers in New Netherland. 30 families of men, women and children took possession in 1624 and planted the seeds of what would later become the famous Dutch colony.

The Dutch reign didn’t last very long, as New Netherland was ceded to the British after only 40 years. Along with the rest of the city, the land was declared New York and put under total control of the English crown.

What really distinguishes Governor’s Island from the rest of the city is its’ history as a military base.

This all began in 1633 with Wouter Van Twiller, the 5th director-general of New Netherland. He operated a farm on the island, bringing a 104 man regiment along with him.

During the American Revolutionary War, the Continental Army raised defensive troops on the island in order to fire on British ships. General Israel Putnam fortified the island with 40 cannons in preparation. Thanks to their efforts, British commanders chose not to enter up the East River, leading to the success of George Washington’s retreat from Brooklyn into Manhattan after the Battle of Brooklyn.

Following the end of the American Revolution, the tension between the Unites States and the newly overturned French crown prompted the construction of Castle Williams. Based on designs by Colonel Jonathan Williams, the fort was completed by late 1811, and later used to defend the city in the War of 1812 against the British. Castle Williams would later become a holding place for Confederate prisoners during the Civil War and eventually the east coast counterpart to Alcatraz Island in California.

Starting in 1878, the military installation on the island became a major United States Army post. Families started moving in while more recreational and educational facilities were built on the island. The first incinerator in the United States was built on Governor’s Island in the year 1885.

Shortly afterwards, excavated material from the first New York City subway was deposited on the southern edge of the island, adding 103 acres and bringing the grand total to 172.

Before long, the Army left Governors Island and the land later became a major United States Coast Guard base, the largest instillation of its kind with a self-contained residential community and a population of over 3,500. However, due to its high operations cost and remote location, the base was closed in 1995. But not before becoming home to now famous author Louis Lowry, who lived on the island during her teenage years while her father served as a dentist.

On February 4, 1985, 92 acres of the island was recognized as a National Historic Landmark. This prompted Governor’s Island to serve as the center of various historic events. First, as the setting for the relighting of the refurbished Statue of Liberty. Then, in 1988, as the location of Ronald Regan’s final meeting as president. Finally, in 1993, Governor’s Island sponsored talks between Haitian political leaders to help restore democratic rule in Haiti- which resulted in the Governors Island Accord.

Once the Coast Guard left, the city began conversing with private developers and city planners to discuss potential ideas for the island’s future. An ideas competition called “Public Property” was hosted, open to anyone who registered. Over 200 entries from 14 different countries were received.

The federal government announced it would sell Governor’s Island to the people of New York for a very small cost, in order to be used for public benefit. In 2003, 150 acres were transferred to the city of New York for just $1.

By 2012, ground was broken on a new park and public spaces designed by a landscape architecture firm known as West 8. By 2015, the Oyster Pavilion waterfront oyster bar opened to the public, followed by The Hills in 2016- the last piece of redeveloped land featuring four hills and four long slides ranging from 25 to 70 ft.

Even today, the island continues to introduce new programs and activities to further connect to the city and its locals. This past summer, a glamorous camping retreat (otherwise known as “glamping”) allowed its customers to experience exclusive access to the island, along with private accommodations and daily activities.

Other experiences on the island include free walking tours, biking, picnics, art, festivals, concerts. The northern tip of the island features an artificial beach operated by New York Water Taxi. Visit Picnic Point and Hammock Grove. Or check out the original Coast Guard buildings and barracks in the areas yet to be redeveloped.

In the early years, Governors Island was only open on the weekends. Nowadays, you can visit any day of the week from May 1 through October 31. The ferry can be accessed in the Battery Maritime Building, located next to the Staten Island Ferry terminal. Service is every half hour for just $3.